Yes I admit it... I was one of those fools that used to never watch the old Black and White films. While I have seen the light several years ago and began watching them I am very far behind on films from really anything older then the mid seventies.. So I thought this month I should rectify that. At least for some comedy. So most these films I have never seen before. And some that I did... it has been so long since I seen them I remember nothing about them.

I decided to do this last month so I been adding a bunch to my collection to watch. So I am hoping to watch a nice selection from the following list in my collection....​
Abbott & Costello:
- Meet Frankenstein
- Meet the Mummy
- Africa Screams
- Buck Privates
- Jack and the Beanstalk

Jerry Lewis:
- The Disorderly Orderly
- At War with the Army
- The Nutty Professor

W.C. Fields:
- Alice in Wonderland
- The Bank Dick
- The Big Broadcast of 1938
- If I Had a Million
- International House
- It's a Gift
- Man on the Flying Trapez
- Million Dollar Legs
- Mississippi
- Mrs. Wiggs of the Cabbage Patch
- My Little Chickadee
- Never Give a Sucker an Even Break
- The Old Fashioned Way
- Poppy
- Six of a Kind
- Tillie and Gus
- You Can't Cheat an Honest Man
- You're Telling Me!

The above is in my collection... plus I have access to my roommate's collection, Netflix, Hulu and Amazon Prime to find others. Looking at the above list... what is the must see films? I will of course be starting this on November 1st.

Well I get off work tonight at 12:30.... so if I have the energy after work I may pop in the first one. If I do it will probably be a short or two.

I haven't seen many of those listed, but I watched most of the WC Fields films a few years back and enjoyed them. And don't forget Mae West (titles on the Essential Collection DVD listed here):

Thanks! My Little Chickadee is the first thing in my collection with Mae West. And I have none with Ma and Pa Kettle. But having my roommate look for me at work... she works in a used book and movie store.

I just heard back from my roommate. None available for Mae West... but she has 2 sets of Ma and Pa Kettle with 4 movies in each set.

Pete Battista said:
I just heard back from my roommate. None available for Mae West... but she has 2 sets of Ma and Pa Kettle with 4 movies in each set.

Those are the sets I have. The 10-movie set came out later. Not sure how much those sets are at your friend's store, but Amazon has the 10-film set for just over $8:

Malcolm R said:
Those are the sets I have. The 10-movie set came out later. Not sure how much those sets are at your friend's store, but Amazon has the 10-film set for just over $8:

Yeah I know... was looking at that set. But those sets I got coming is free. She has a lot of credit at the store and she is gifting them to me.

Subscribed! Can't wait to hear about your journey, Pete!

Even though I am tired after a long night of work I popped in The Egg and I. Though I may not finish it till I get up tomorrow. So far so good though! Plot:
On their wedding night Bob informs his new bride Betty that he has bought a chicken farm. An abandoned chicken farm, to be exact, which is obvious when the two move in. Betty endures Bob's enthusiasm for the rural life, rustic inconveniences, and battling nature, but her patience is severely tested when glamorous neighbor Harriet Putnam seems to set her sights on Bob.

This is a fun film. And a good introduction to the Ma & Pa Kettle characters. Though I do wish they had a little more screen time in it. But watching this film I can see how these characters got popular with their own films. The cast did a fine job. And I was happy to see Fred MacMurray in it as I have liked everything I seen him in so far. Definitely worth the time put in to watch it.

Fatty and Minnie He-Haw
Fatty is courted by an enormous Indian princess, who proposes marriage.

My Thoughts:
This is my first time seeing anything with Fatty Arbuckle. While not bad, I think I was expecting a little more from it. I think the scenes with him in the saloon in town were better then the scenes of him at the Indian camp.

The DVD I watched this on could have used a bit more cleaning up. But then again considering this film is more then 100 years old (1914) they probably did the best they could with it.

Well, color me stupid. I had no idea The Egg and I was part of the Ma & Pa Kettle series. I had always heard the title but really knew nothing about it. And I am totally flabbergasted that Claudette Colbert was in it...AND a bonus of Louise Allbritton (and Fred MacMurray, too)!

I now have something to look into.

I've actually never seen a Ma & Pa Kettle movie. I thought I knew what they were about...but, maybe not. Not really.

Don't that just figure... go to watch the next Ma & Pa Kettle film to realize they are not in the sets in order.

Pete Battista said:
Don't that just figure... go to watch the next Ma & Pa Kettle film to realize they are not in the sets in order.
Click to expand...

Of course not. Why would putting them in order make any sense?!?

Plot:
When country bumpkin Pa Kettle (Percy Kilbride) enters a competition hoping to get a free tobacco pouch, he unexpectedly wins first prize: a brand-new modern house in the suburbs. Although Ma (Marjorie Main) quickly adapts to her new home's push-button conveniences, Pa is flummoxed by the newfangled technology.

Now this is more of what I was expecting going in. I like the fish out of water story line that is in this one. Though I must admit that it is pretty predictable. At least going by today's standards. There is several laugh out loud moments. And I liked how opened up for the next movie at the end of this one. Letting us know what the next film will be about. A well done fun comedy. 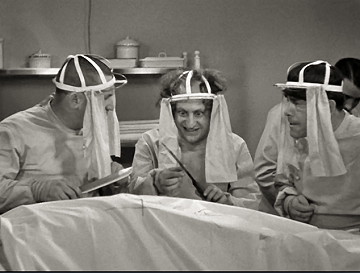 The Three Stooges: Men in Black
The stooges become doctors at a large hospital where they disrupt patients and staff alike.

My Thoughts:
A fun short. I liked the setting in the hospital with the stooges as doctors. I must say I do prefer these earlier shorts with Curly Howard instead of Shemp or Curly Joe. 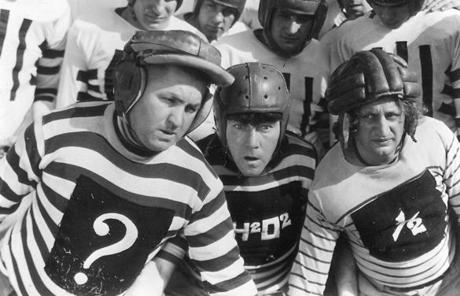 The Three Stooges: Three Little Pigskins
The stooges are mistaken by a gangster for the "Three Horsemen of Boulder Dam", famous football players.


My Thoughts:
While I didn't like this one as much as the previous one. It still was worth the time to watch it. While I can't say I recognized her... according to the credits this one has Lucille Ball playing a gun moll.

Can I just say I feel very lucky. This coming Saturday is my daughter's 22nd birthday. And how does she want to spend it? She wants to spend the day with me...watching a handful of Abbott and Costello films for this marathon!
You must log in or register to reply here.