He's probably best known for playing the title role in The Chronicles of Narnia: Prince Caspian.

This is from about a month ago, but it looks like The Punisher will be joining Iron Fist and The Defenders on Netflix in 2017:

BTW, Luke Cage getting great advance reviews. I posted a link in the Luke Cage thread. Looking forward to it.

Lots of Marvel Netflix news coming out of New York Comic-Con today. In addition to the just-released trailer for the first season of "Iron Fist", we got updates on the next two shows in the Marvel-Netflix pipeline: Elodie Yung, who played Elektra in Daredevil season 2, teased her involvement in The Defenders:

Great news. Her pilot was the best of the three Marvel-Netflix series launched so far. I'm also pleased by the confirmation in Marvel's press release that "The Defenders" limited series will only be eight episodes. If I had a consistent complaint across the four (generally excellent) Marvel-Netflix seasons released so far, it's that they tend to feel padded by a couple episodes. Eight episodes should mean that this event is lean and mean.

I wonder if the second seasons of Luke Cage and Iron Fist will be combined into Heroes For Hire. Mike Coulter teased HFH this weekend:

On the one hand, I'd love to see a second season of Luke Cage, but HFH is enticing as well. I guess there will never be enough time for all the Netflix shows we'd like to see.

Sam Favate said:
I wonder if the second seasons of Luke Cage and Iron Fist will be combined into Heroes For Hire. Mike Coulter teased HFH this weekend:

On the one hand, I'd love to see a second season of Luke Cage, but HFH is enticing as well. I guess there will never be enough time for all the Netflix shows we'd like to see.
Click to expand...

I think I'd prefer a "Heroes to Hire" series, actually. Especially if the show divided its time between the Cage/Rand partnership and the Misty Knight/Colleen Wing partnership.

Good news about Knight and Page for "The Defenders"!

Also, more photos have popped up from the set, including a meeting between Misty and Jessica:

Not sure who else they could add, but I'm interested to see.

It'll also be interesting to see how they handle the credits order even for the main core cast, since they all get first billing on their own series. Presumably Signourney Weaver will get the "and" credit since that usually goes to the big-name cast as the villain. And presumably Rosario Dawson will retain her "with" credit just before the "and" credit.

But after that it gets tricky: "Daredevil" was the first Marvel/Netflix collaboration and is the flagship of the standalone series, so it'd make sense for Charlie Cox to get top billing. On the other hand, Krysten Ritter is a bigger name than Cox is, so she might get top billing. I would imagine that Mike Colter will be behind both of them, especially since he's taken secondary billing already for "Jessica Jones". And Finn Jones will probably be credited last, since he's got the thinnest resume of the four. On other other hand, perhaps they'll all get credited at once, with further grouping by series for all of the supporting characters from the component shows. That would keep the length of the credits sequence down.

Often, on the Netflix shows, the credits only reflect the characters that appear in the episode. Maybe that's the answer. No idea about the order of the main four, but my guess is that you're right.

I wonder if we'll see Agent Coulsen acting like Nick Fury in forming this group. Clark Gregg is rumored to show up on Iron Fist (he's a big fan).

The cover story of this week's Entertainment Weekly is a feature on "Marvel's The Defenders", coming : 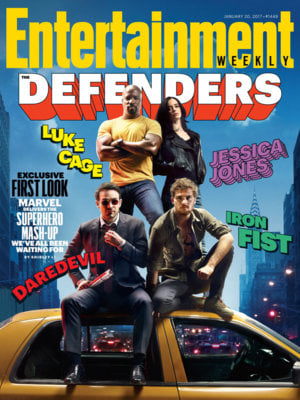 (click to enlarge)
This Week's Cover: Meet The Defenders in EW's exclusive first look
(includes a video from the cover shoot that I can't embed here)
“Every one of them is following their own trail of bread crumbs, trying to unpack a mystery in New York,” explains showrunner Marco Ramirez, who produced Daredevil‘s first season before co-showrunning the second. “We wanted them all caught off guard. Once they’re in that room together, it’s kind of like, ‘Oh, shit, who are you?'”

"The Defenders" first look: Meet Sigourney Weaver's villain — and learn her name
Ramirez confirms that her character is an original creation for the show and not drawn from the comics.

It looks great. You can see a video of the photo shoot here:

And a bunch of pictures here: OK so just finish Iron Fist, now the long wait, but for this team up the writing and pacing is going to need to be tight,

EW is reporting that the show premieres Aug. 18, 2017, which is the last series of numbers seen in the teaser above.

Matt's wearing a makeshift disguise in the teaser. I guess at this point he's keeping his identity secret. An alternative explanation is everyone is playing a trick on him, and has told him they are wearing masks, too. "You all have disguises, right?" Yeah, sure we do, yeah..." (yeah yeah he could probably "sense" if they were wearing a costume or something, but it's funny, non?).
You must log in or register to reply here.