Pre-Order I Dream of Jeannie: The Complete Series (Blu-ray) Available for Preorder (2 Viewers)

Josh Steinberg said:
Whatever was on the previous Mill Creek set, nothing new, that’s my guess.
Click to expand...

AFAIK, Mill Creek only provides extras if they were on the original company's DVD sets, and I don't remember any extras on the Sony sets.

Very excited about the series coming to Blu ray!

Is there a full
Press announcement?

I’m actually slowly watching the final season at the moment.

The Obsolete Man said:
AFAIK, Mill Creek only provides extras if they were on the original company's DVD sets, and I don't remember any extras on the Sony sets.
Click to expand...

I just preordered at Amazon.

I was not expecting this series to come out on blu ray. I saw it often in syndication. Though I’m not a super fan, I’ll be ordering this set too. Funny in that I bought the Jeannie bottle on eBay a little over a year ago, the Jim Beam bottle that was used on the show. Not a screen used one of course, but the green tinted bottle in painted.

I hope Bewitched follows too. I recall when I picked up the Mill Creek sets for Bewitched and Jeannie, I thought their DVD’s were not as sharp as the Sony DVD of Bewitched. Maybe my recollection is wrong, so it will be interesting to see how this blu ray looks. The Rockford Files from Mill Creek looks great on blu ray, so I’m sure this show will too.

By the way, there is a press release on another website that confirms that season 1 of this set is the original black & white, so no worries there.

Let’s hope this release helps to open the floodgates of TV shows to Blu-Ray!
IE: The rest if I Love Lucy and The Andy Griffith Show.
Bewitched
Have Gun Will Travel
Munsters
Seinfeld
Leave It To Beaver
Many others!!!

I hope if this sells decently enough that Mill Creek will take on additional TV titles and that their licensors will make the content available for reasonable licensing fees.

I think the big reason this is happening is because HD masters were already in existence so putting them on a disc didn’t involve a lot of heavy lifting. I’m less optimistic that shows without existing HD masters are going to start getting redone with brand new efforts but there are still a good number of shows that had HD masters created for syndication and streaming where the heavy lifting has already been done and I’m all in favor of getting those out on disc while there’s still potentially a market for them.

There's some interviews on youtube that Hagman and others did before passing. There's also a Larry King episode where Eden, Hagman, and Daily talked. Wish they would include those talks.

The licensing on those can be killers, which is a shame - at this point I wish the copyright holders of vintage interviews would let them out at more reasonable terms. I get the business end but it’s not as if there’s a buyer just around the corner that’s going to pay tons of money for the material if only they hold out for more now.

I pre ordered this from this thread the minute it went up. I aint f&^%$g around anymore. If I'm remotely interested, and it is offered, I'm buying it. We need more classic TV on BD, and I have to help that cause.

One of my favorite shows! I still have my old Sony DVDs, and have gone through them all probably 3 times. This will definitely prompt me to do a go-thru again. It’s an absolutely charming show and can’t wait to see it on Blu!

JamesSmith said:
There's some interviews on youtube that Hagman and others did before passing. There's also a Larry King episode where Eden, Hagman, and Daily talked. Wish they would include those talks.

The rights to a CNN show would have to go through Warner Bros. That would probably cost more than Mill Creek would be willing to pay.

Hmmm it says temporarily out of stock on my end for pre-order. Tried Canada's amazon and it's not even up yet.

Boy, that sure doesn't look like Barbara Eden in the top header.

I'd not payed attention until you mentioned it. It's very close but looks to be a double or model made up to look like her. The mouth and nose aren't quite right and the eyelashes are not sculpted properly.

She's an impersonator. Here is her website where people can hire her for events: https://instinctmusic.com.au/live-entertainment/i-dream-of-jeannie/ The photo in the top header is from her website gallery. 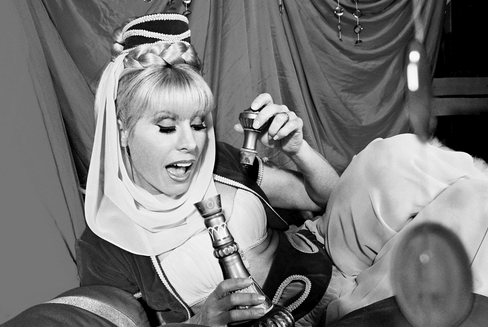 So what pulls these headers for threads, anyway? Some random algorithm or feature the board has?

Josh Steinberg said:
I know that there have been various issues with Mill Creek public domain releases but I’ve never had any trouble or complaints regarding their licensed content on Blu-ray. I would expect that this will be a quality release.
Click to expand...

And I'm sure the packaging will be up to par w/Mill Creek's Charlie's Angels Blu-- maybe 2 cases of 6 discs apiece, or one case with all 12.
You must log in or register to reply here.