Pre-Order I Dream of Jeannie: The Complete Series (Blu-ray) Available for Preorder (2 Viewers) 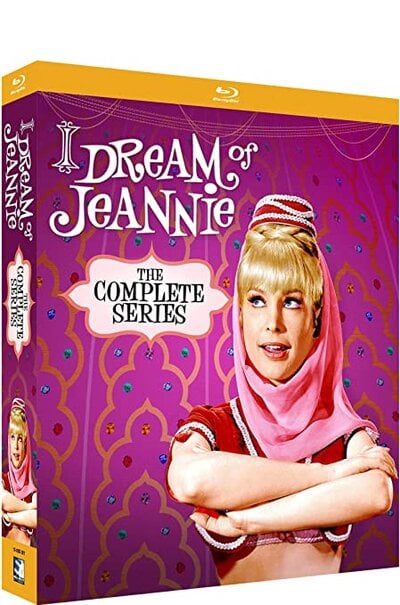 How about them apples? Most of us had given up on classic TV shows on Blu-ray for dead.

That's the big question: will season 1 be B&W here, too?

Yeah didn't think of that. For the price and a complete series set they should include both versions of Season 1 but no original black and white for season one would be a deal breaker for me.

I’m going to guess yes, since it was B&W for Mill Creek’s DVD edition.

Hopefully it means Bewitched may be in the pipeline too

Josh Steinberg said:
I’m going to guess yes, since it was B&W for Mill Creek’s DVD edition.
Click to expand...

Josh, you beat me to the punch. I was going to say the same thing.

Here's hoping Bewitched is on the horizon.

JoelA said:
Here's hoping Bewitched is on the horizon.
Click to expand...

With accurate openings for each season, please.

Randy Korstick said:
Yes thats 11 or 12 episodes per disc. Mill Creek has been releasing blu rays of hour long 48-50 minute shows with 5-6 episodes per disc and no problems so should not be an issue here.
Click to expand...

And this won't have a 5.1 mix taking up disc space either.

Jay_Z_525 said:
With accurate openings for each season, please.
Click to expand...

And subtitles for Jeannie in the opening episode before she speaks English.

And let's get Hagman on the cover too, at least.

I haven't seen this series since summer reruns in my childhood--Barbara Eden was one of my earliest crushes. I might just pick this up if it's not overly expensive!

Great news! Can't wait to watch Jeannie in HD. I really want Bewitched, but it seems like a possibility now! I know some people don't care for Millcreek, but I'm glad someone is putting these Sony shows out in HD on Blu-Ray.
If they really want fans to double dip, they should include the Sony-owned Hanna Barbera Jeannie cartoon series as a bonus! When Millcreek released the Charlie's Angels series on Blu, they included the 2000 series reboot. as a bonus.
Probably won't happen, but I can dream can't I?
Last edited: Apr 28, 2021

I know that there have been various issues with Mill Creek public domain releases but I’ve never had any trouble or complaints regarding their licensed content on Blu-ray. I would expect that this will be a quality release.

The colorized versions of these shows only exist in SD. I really, really doubt they are going to re-colorize them in HD.

Any guesses on extras?

So glad to see this coming out. Hope we see Bewitched next.

JamesSmith said:
Any guesses on extras?

Whatever was on the previous Mill Creek set, nothing new, that’s my guess.
You must log in or register to reply here.