Younger readers may find this almost inconceivable, but when Sammy Davis Jr. married the Swedish actress May Britt in 1960, interracial marriage (miscegenation) was illegal in 31 states. In fact, anti-miscegenation laws were not declared unconstitutional by the Supreme Court until 1967, coincidentally the same year in which Guess Who's Coming to Dinner was released. It turned out to be Spencer Tracy's last film, and of course it is the ninth and final film in which he co-starred with Katharine Hepburn. Produced and directed by Stanley Kramer, this landmark cinematic achievement has been brought to Blu-ray by Twilight Time with a gorgeous transfer courtesy of Sony. 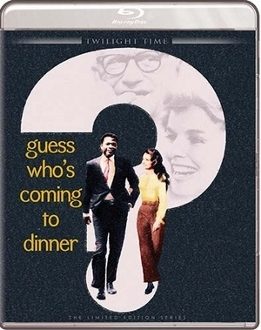 He thinks you're going to faint because he's a Negro. - Joanna "Joey" Drayton, to her mother

Dr. John Prentice (Sidney Poitier), a black physician of international renown, and Joanna “Joey” Drayton (Katharine Houghton), the white daughter of a San Francisco newspaper publisher, met ten days ago in Hawaii and almost immediately fell in love. They fly to California, unannounced, so that John can meet Joanna’s parents, Matt Drayton (Spencer Tracy) and his wife Christina (Katharine Hepburn). John is apprehensive, but Joanna insists that her parents are very progressive and will certainly accept him. John is even more apprehensive about telling his own parents that he is going to marry a white woman.

There is some urgency, because John has to fly to New York for a meeting and cannot stay overnight in San Francisco. After the New York meeting he has to fly to Europe, and Joanna has agreed to meet him there in two weeks so they can be married. The Draytons live in a beautiful house overlooking the Golden Gate Bridge, where they are tended to by a black maid, Tillie (Isabel Sanford), who has been with them for more than two decades. When John and Joanna arrive at the house only Tillie is there, but Christina rushes home when she learns that her daughter has returned from Hawaii. While John is on the phone with his parents in another room, Joanna starts to tell her mother how wonderful he is. The look on Christina's face when she sees the handsome black man emerge from the study is priceless.

When Joanna's father arrives and hears the news he is, in his own words, flabbergasted. He knows how controversial interracial marriage is, and he fears that John and Joanna will not be able to cope with the disapproval of the country and the world. Christina, however, gets over her initial shock and she tries to counsel her husband. "We told her it was wrong to believe that the white people were somehow essentially superior to the black people," she reminds him. "Or the brown or the red or the yellow ones, for that matter. People who thought that way were wrong to think that way. Sometimes hateful, usually stupid, but always, always, wrong. That's what we said."

John tells Matt and Christina that he understands how they feel, and without Joanna's knowledge he pledges that he will not go through with the marriage unless her parents give their blessing before he leaves for New York. Christina sees how much John and Joanna are in love, and she is inclined to give her approval, but Matt is unmoved. The situation becomes even more complicated when John's father (Roy Glenn) calls back to say that he and his wife (Beah Richards) want to fly up from Los Angeles to see him and meet his fiancée before he leaves for New York. Joanna gets on the phone and invites both of them to have dinner at the Drayton house - but the Prentices still have no idea that she is white.

Spencer Tracy was only 67 years old when he died a few weeks after the filming was completed, but he looks to be at least ten years older due to his poor health. Nevertheless, he gives a compelling and at times powerful performance. Katharine Hepburn - whose eyes are absolutely luminous on this Blu-ray - deservedly won her second Academy Award for Best Actress in a Leading Role. She must have known that Tracy's days were numbered, and the knowledge that they loved each other gives the film added poignancy. Sidney Poitier is elegant and soft-spoken as Dr. Prentice, but he really comes to life when he has a man to man talk with his father. Katharine Houghton, who in real life is the niece of Katharine Hepburn, more than adequately acquits herself in her first feature film appearance. Isabel Sanford is excellent as the black family maid who surprises John Prentice by vehemently disapproving of his relationship with Joanna, and Cecil Kellaway is fine as the kindly family friend, Monsignor Ryan. The actors - four of whom received Academy Award nominations - are expertly directed by the famed Stanley Kramer, who also produced the film. Screenwriter William Rose won an Academy Award for his excellent screenplay.

I mentioned earlier that it was coincidental that anti-miscegenation laws were found to be unconstitutional by the Supreme Court the same year that Guess Who's Coming to Dinner was released. At the time it was a very controversial film, not in small part because it was the first mainstream film to show a black man kissing a white woman (albeit a rather chaste kiss). As I watched the film I could not help but think that history is repeating itself, because it could easily be remade today with the protagonists being two men or two women and it would have the same relevance that it had in 1967. Now, we do not want the discussion of this film to devolve into a political argument about gay marriage, but at one point Matt Drayton pessimistically tells Monsignor Ryan that interracial marriage will be accepted in "fifty years, maybe, or a hundred years." Fortunately, it did not take nearly that long.

It is impossible to criticize this outstanding Blu-ray. Everything about it is a close to perfect as one could want. The 1080p image is encoded with the AVC codec and is properly framed at 1.85:1. The picture is very sharp throughout and exhibits fine detail. The colors are gorgeous, highlighted by stunning reds. Black levels are inky and shadow detail is beyond reproach. The grain structure is natural and intact, which gives the production a satisfying film-like appearance.

Be sure to read the comments of our resident expert, Robert A. Harris, who gives Guess Who’s Coming to Dinner his highest rating.

A few words about...™ Guess Who's Coming to Dinner -- in Blu-ray

The English 2.0 DTS HD-MA could not possibly be better. Every word of dialogue is clear and understandable (English SDH subtitles are available). Frank De Vol's score, which also was nominated for an Academy Award, has excellent fidelity. The film's theme song is "The Glory of Love," a standard which was written by Billy Hill and was recorded by Benny Goodman in 1936. Here it is sung by Jacqueline Fontaine, who also appears as a singer in a nightclub scene.

The soundtrack displays no distortion, hiss, or other age-related anomalies.

The Blu-ray packaging says that the audio is English 1.0 DTS HD-MA, but it has been confirmed by Twilight Time that it is actually 2.0. The dialogue is confined to the center channel, but the music is stereo. Thanks to HTF member Kevin Parcher for pointing this out.

There are a multitude of extras on this Blu-ray disc, most of which were made in 2007 to commemorate the film's 40th anniversary.

There is an audio commentary track by film historians Eddy Friedfeld, Lee Pfeiffer, and Paul Scrabo, who provide interesting insights into the film and the careers of the people who were involved in making it.

There are filmed introductions to the film by Karen Kramer (the widow of Stanley Kramer), Steven Spielberg, Tom Brokaw, and Quincy Jones. Karen Kramer, aka Karen Sharpe, was 72 or 73 years old when her contribution was filmed, and she looks spectacular.

"A Love Story for Today" is a featurette which includes audio comments by Stanley Kramer, who emphasizes that the film is, above all else, a love story. This extra has a running time of 30 minutes and includes an interview with Katharine Houghton. She tells about how Columbia Pictures wanted to cancel the film, supposedly because Spencer Tracy's frail health made him uninsurable, but actually because the studio thought that the subject matter was too controversial for the film to be a success. Kramer and Katharine Hepburn agreed to put up their salaries as collateral in case Tracy could not finish the project.

"A Special Kind of Love" is a 17-minute featurette which expands upon the material covered in the first featurette.

"2007 Producers Guild Stanley Kramer Award Presentation to An Inconvenient Truth" has Karen Kramer explaining how she helped to establish the award for filmmakers who make important movies. The award is presented to Al Gore by Harrison Ford.

Also included are the original theatrical trailer and a teaser trailer.

Finally, we have the isolated film score and a booklet which includes a wonderfully insightful essay by Julie Kirgo.

Guess Who's Coming to Dinner was a groundbreaking film when it was released in 1967 and it remains relevant and entertaining today. One of its many pleasures is the opportunity to see Spencer Tracy and Katharine Hepburn in their last film together. This is one of the best catalog Blu-ray releases of the year.

Guess Who’s Coming to Dinner has been released in a limited edition of 3,000 copies, so readers who are interested in purchasing it should go to the Screen Archives website or the Twilight Time website to verify that it is still available.

Thanks Rich. I haven't seen this since before the days of DVD. I think I'm overdue to see it again.

Quite coincidentially, I watch Guess Who's Coming to Dinner yesterday. As much as I simply adore this film, I didn't remember it being so overly...preachy, so "bonk bonk on the head." I love these kinds of movies for a variety of reasons, though I think a few trims would have been a good idea in the long run.


It's easy to see why Joey falls for John Prentice: Poitier is so mild mannered, so soft spoken, yet infinitely intimidating. The conversation Richard mentions near the end of the picture (John and his father) is a hell of a speech and performance.


And having just watched Up over the weekend, I kept replacing Spencer Tracy with Mr. Fredrickson.

I just came across an IMDB entry for a 1975 TV movie version of GWCTD starring Richard Dysart and Eleanor Parker in the Tracy/Hepburn roles. Did anyone see it? It was directed by Kramer, apparently.

A 30 minute pilot of a sit-com version of the movie.

These posts at IMDB illustrate why this movie's dated crap.

Sky Captain said:
These posts at IMDB illustrate why this movie's dated crap.
Click to expand...

I couldn't disagree more. You can't judge the film as though it were a contemporary story. It now resides within the annals of historical fiction.

I agree with Mark. One post Sky Captain linked to takes exception with acting and has nothing to do with the story itself. The second seems predicated on the notion that social problems with interracial relationships are a relic of the past based on one person's experience. That's a sample size of one...and a terrible way to base an argument.
You must log in or register to reply here.