To Sir, With Love Blu-ray Review

There have been many films about high school students and their teachers, but few of them are as memorable and authentic as the 1967 film To Sir, With Love. Starring Sidney Poitier as an out-of-work engineer who takes a teaching position in an underachieving school in London because he needs a job, To Sir, With Love was a surprise hit at the box office and its theme song (sung by Lulu) was #1 on the Billboard charts in the United States for five consecutive weeks. It has now been released by Twilight Time with a beautiful Blu-ray transfer from Sony. 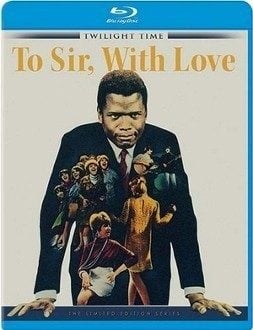 But how do you thank someone who has taken you from crayons to perfume? - Lulu

It is likely that just about everyone had a favorite teacher in high school who challenged students to excel, and many probably also knew teachers who were, in a less favorable way, challenged by their students. When I was a sophomore at a Catholic high school my favorite teacher was R.H. Naversen, whose love of literature inspired everyone in his classroom. Much to the chagrin of me and my classmates, halfway through the school year Mr. Naversen was reassigned to the junior and senior classes, ostensibly because he had recommended that we read "Catcher in the Rye." He was replaced by a woman from the Bronx, Miss Brennan. We were not happy about losing Mr. Naversen, and we took out our frustration on Miss Brennan by constantly challenging her. I recall getting into a prolonged and heated argument with her about whether animals go to heaven when they die (my position was that there is a heaven for animals, but in truth I would have taken the opposite of whatever her position was). On the last day of school she told us that she would not be returning for the next school year because we did not respect her.

Mark Thackeray (Sidney Poitier) faces a different challenge than Miss Brennan. He arrives at the North Quay Secondary School, a school for underprivileged teenagers in the East End of London, as a replacement for a teacher who had burned out trying to teach his unruly students. The female members of the faculty try to encourage Thackeray, but Mr. Weston (Geoffrey Bayldon) insists that trying to teach the hooligans in the class is hopeless. This is Thackeray's first teaching position, and in fact he has never aspired to be a teacher. Born in British Guiana and having spent some time in the United States, he has a degree in engineering but has been unable to find work in his chosen field. Whether his skin color has played a role in his unsuccessful job hunting is a question which is never explicitly raised, but he does stick out in a school which is virtually all white.

Thackeray decides to give teaching his best shot, and he gets moral support from an attractive new teacher, Gillian Blanchard (Suzy Kendall), and from Grace Evans (Faith Brook), an experienced teacher who does not entirely share Mr. Weston's jaded view of the students. "I can't guide you," counsels another teacher, Clinty Clintridge (Patricia Routledge), "but don't take any nonsense from these little tykes." Thackeray, of course, is immediately tested by his students, the most aggressive of whom is the troublemaker Denham (Christian Roberts). The girls in the class who make an immediate impression upon Thackeray are Pamela Dare (Judy Geeson) and Barbara "Babs" Pegg (Lulu).

Thackeray quickly learns that the students have little interest in learning. One day he arrives for class and discovers that the girls are burning something (we are not told precisely what, so set your imagination free) in the classroom stove. He sends the boys out into the hallway and he launches into a tirade against the girls. "I am sick of your foul language, your crude behavior, and your sluttish manner," he berates them. After he is finished with them he goes to see Gillian and chastises himself for losing his temper. It then dawns upon him that the problem is that everyone treats the students as kids. Perhaps, he thinks, he can reach them by treating them as adults.

The cast members who play the students do a fine job, and it helps that most of them are age appropriate for their roles. Poitier, who also starred in Guess Who's Coming to Dinner and In the Heat of the Night that year, dominates the screen with his intensity and empathy. There is a subtext of racism in the film, but it is treated with subtlety. Thackeray and Gillian clearly are attracted to one another, but that relationship is not fully developed. More controversial is the fact that Pamela Dare clearly develops a crush on Thackeray. He is aware of her feelings but he gently dissuades her. Race only comes to the forefront when Seales (Anthony Villaroel), who apparently is the only black student in the school, loses his mother to illness. The students tell Thackeray that they cannot deliver flowers to Seales' family because people would talk if they went into a black family's house. Lulu, who had limited acting experience, is excellent as Barbara Pegg and also sings the film's theme song. Judy Geeson is attractive and appealing as Pamela, and Christian Roberts is entirely believable as the rebellious Denham.

To Sir, With Love is written and directed with aplomb by James Clavell, the author of "Shogun" and the screenwriter for films such as The Great Escape. The film is based upon the semi-autographical novel of the same name by schoolteacher E. R. Braithwaite. Nearly 50 years after its release To Sir, With Love remains as timely and relevant as it was in 1967.

This Blu-ray release is yet another first-class transfer from Sony, a company which rarely disappoints. The 1080p color image is encoded with the AVC codec and is framed at 1.85:1. The image is highly detailed, with excellent shadow detail and solid black levels. The colors are muted but accurate, and are consistent with the surroundings and subject matter. To Sir, With Love was shot with a miniscule budget (Poitier took no salary and worked for a percentage of gross, a gamble which paid off handsomely). Nevertheless, it does not look like it was made on a shoestring, thanks in large part to the fact that exteriors were filmed on location in London. Our resident expert Robert A. Harris has praised this Blu-ray disc, and readers are encouraged to read his comments:

The audio was recorded in mono, and the soundtrack has been faithfully reproduced in 1.0 DTS HD-MA. The dialogue is clear and understandable and the audio is free of distortion and age-related anomalies. In short, it is as good as possible given its inherent limitations.

This Twilight Time release has a surprisingly large array of extras.

As usual, Twilight Time has included the isolated score track. The music soundtrack includes performances by both Lulu and the British band The Mindbenders.

There are no fewer than two commentary tracks. One features Nick Redman and Julie Kirgo, and they are accompanied by the wonderful Judy Geeson. The second features author E.R. Braithwaite and educator Salome Thomas El.

In addition, there are five excellent featurettes:

"E.R. Braithwaite in His Own Words" gives the author the opportunity to reflect upon his real-life experiences which inspired his book and the film, and he discusses the points at which the film deviates from his real life.

"Lulu and the B Side" has the singer/actress explaining how the theme song for To Sir, With Love was originally released by her record company as the B side. When that song failed to catch on, disc jockeys in the U.S. started playing the theme song and it became Billboard's #1 song of the year.

"Miniskirts, Blue Jeans and Pop Music" explores the teenage culture of the sixties and how the filmmakers strove to be as authentic as possible.

"To Sidney with Love from Marty Baum " features Sidney Poitier's long-time agent discussing his many years of representing the actor.

To Sir, With Love is an exceptional film which realistically and touchingly explores the obstacles which teachers face while trying to teach underprivileged students. This beautiful Blu-ray release is a limited edition of 3,000 units. Readers who are interested in purchasing it should go to the Screen Archives website to verify that it is still available.

Thanks for the great review--I love this movie! Just watched my copy the other day. Still going through the extras. Twilight Time and Sony did a fantastic job with this release. Can't wait for Guess Who's Coming to Dinner. Just one note. The quote you attribute to Grace Evans was actually spoken by Clinty Clintridge (Patricia Routledge)
S

Grabbed my copy today. Excellent film and from the review, sounds like a fantastic release!

TomF said:
Thanks for the great review--I love this movie! Just watched my copy the other day. Still going through the extras. Twilight Time and Sony did a fantastic job with this release. Can't wait for Guess Who's Coming to Dinner. Just one note. The quote you attribute to Grace Evans was actually spoken by Clinty Clintridge (Patricia Routledge)
Click to expand...

Thanks, I made the mistake while taking notes. I've made the correction.

The extras on this are amazing! We get to see an interview with the real teacher, Lulu, and Sunglasses!
You must log in or register to reply here.