Just weeks before the broadcast premiere of its fourth season, TNT and Warner Home Video bring the complete third season of Falling Skies to Blu-ray. Like previous seasons, audio and video are a definite step up from the heavily compressed cable broadcasts, and the addition of a new ally in the fight for freedom brings a new twist to the series. 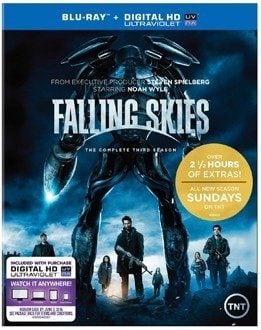 At the end of the second season, the 2nd Mass was captured by Karen, who implanted an eye worm into Hal and announced (to Tom’s surprise) that Anne was pregnant. With some help from the Skitter rebels, the team managed to escape back to New Charleston, only to find themselves being invaded by yet another race of aliens.Season three picks up the story seven months later, where the 2nd Mass are fighting side by side with rebel Skitters, but somehow their movements are known ahead of time by the Espheni, leading Tom (Noah Wyle) and Weaver (Will Patton) to believe they have a spy and traitor on their hands. The alien race encountered during the cliffhanger are the Volm, who have been chasing the Espheni across the universe in an effort to free each planet’s population from the oppression and destruction, and have appointed Cochise (Doug Jones) as their ambassador. Tom has also been appointed President of New Charleston, aided by Marina Peralta (Gloria Reuben), a realist who provides a good sounding board to Tom. Tom’s relationship with Cochise leads to the creation of a super weapon, and brings up questions as to what the Volm’s actual end game is.The biggest weakness of this third season is the shift from story and action to more of a soap opera. Hal (Drew Roy) and Margaret (Sarah Carter) are having relationship issues with him wheelchair bound and paralyzed. Tom and Anne (Moon Bloodgood) grow distant after the birth of their child, with Tom spending more time leading the troops than with his family. Is Anne having a psychotic break from postpartum depression, or is there really something wrong with her daughter?That’s not to say that season three doesn’t have any strengths. One of the major highlights of this season was the addition of Cochise, played by Doug Jones under layers of latex and foam, with some CGI assistance for facial expressions. Jones is a natural for this type of acting, having played similar characters for director Guillermo del Toro in both Hellboy movies and Pan’s Labyrinth. He and Tom have a lot in common and a deep understanding of one another, leading to Cochise standing up for the humans when the Volm leader wants to place them in internment camps “for their own protection.” Gloria Reuben and Robert Sean Leonard (almost unrecognizable as an agoraphobic scientist tapped to keep the city’s power grid operating) are also welcome additions to the cast, helping viewers to overlook the soap opera storylines so prevalent this season.

The 1080p transfer, compressed using the AVC codec, retains the 1.78:1 aspect ratio of the original broadcasts. The look of the show shifted to more desaturated colors, leaning more to a blue tone, something most apocalyptic science fiction films and series often do. While colors are consistent, and contrast and black levels are a minor problem, particularly during darkly-lit sequences, where shadows often get lost in the background. Still, compression artifacts are non-existent, a major improvement over the cable and satellite broadcasts on TNT.

Although the packaging contains the DTS-HD Master Audio logo (and the press release lists English True DTS-HD, whatever that is), the discs actually contain Dolby TrueHD 5.1 soundtracks, much like the two prior seasons. The audio soundtrack gets a major improvement over the heavily compressed Dolby Digital 5.1 track used in the cable and satellite broadcasts, taking full advantage of the increased bandwidth and fidelity of the lossless Dolby TrueHD codec. The entire soundstage opens up nicely, with increased separation, better bass response, and what appears to be much more active surround channels (although, according to the sound designers, nothing is changed in the mix except the bit rate when the broadcast tracks are created). Dialogue remains intelligible and never gets lost in the mix, reproducing mostly out of the center channel. Each episode is near reference quality.

Although the third season was more soap opera than exciting storyline, it was still interesting summer television, and the addition of some new characters helped to overlook those issues. The inclusion of all of the 2nd Watch webisodes and the two documentaries on disc two round out a solid package.

I went ahead and ordered this on Amazon for under $22. I'm really looking forward to Season 4!

A very underrated sci-fi series. Some people probably watch the first season and see the mediocre effects (at least that's what my friend said).

A side note on the UltraViolet versions - the only place you can stream them from, at least as far as I could find, is Flixster. However, Flixster (or Warner/TNT) have any kind of casting (such as Chromecasting) blocked for this series, as I was unable to stream this from my phone to the TV in the break room at work over a Chromecast (I got a "content blocked" error).
You must log in or register to reply here.