In preparation for the broadcast premiere of its final season, Falling Skies: The Complete Fourth Season arrives on Blu-ray with a much improved story arc than the previous season, but fans may be disappointed by the underwhelming set of extras. 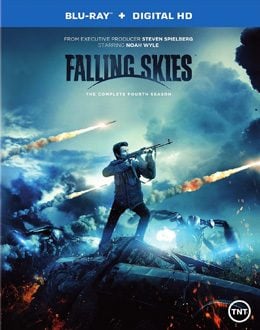 As the third season came to a close, the 2nd Mass found themselves heading back to New Charleston to warn the citizens of the internment camps that the Volm want to send the humans to while fighting the Espheni. In the opening prologue for season four, the 2nd Mass are attacked on the outskirts of New Charleston, cutting them off into four groups. Tom Mason (Noah Wyle), Colonel Weaver (Will Patton), Hal (Drew Roy), and Pope (Colin Cunningham) have been captured and held prisoner in a ghetto camp, with Tom and Weaver in solitary confinement. But Tom has managed to escape confinement at night, mapping out the ghetto in hopes of finding an escape route and lead the prisoners to safety. It is during one of these escapes that Tom makes contact with Cochise (Doug Jones), who is leading a small group of other Volm soldiers on a reconnaissance mission.

Meanwhile, Anne (Moon Bloodgood) is leading a group of fighters in search of her daughter, Lexi, and trying to uncover why the Espheni are rounding up children, but not harnessing them. Youngest brother Matt (Maxim Knight) was captured and being held in a re-education camp, reminiscent of Hitler Youth Camps during World War II, trying to brainwash children into believing the Espheni are friends and attempt to capture their parents. Middle brother Ben (Connor Jessup) awakens to find himself in a Lost Horizon Shangri-la vacant Chinatown with Maggie (Sarah Carter) where an uncomfortable peace is being held at bay by his quickly maturing younger sister Lexi (Scarlett Byrne) with help from Lourdes (Seychelle Gabriel), who now worships Lexi after she removed the Espheni parasites from her at the end of season three.

While fragmenting the 2nd Mass may have given this season a slow start, it did allow the writers to build and deepen the characters, who became a bit one-dimensional with the soap opera plot lines from last season. When everyone finally comes together and is reunited by the mid-way point, they are a much stronger team, and are able (and believable) to lead on their own during the climactic showdown and cliffhanger. There are still some soap opera elements in this season (such as the love triangle between Hal, Maggie, and Ben), but they are not as prevalent.

The 1080p transfer, compressed using the AVC codec, retains the 1.78:1 aspect ratio of the original broadcasts. Each team had its own color palette and look, with the ghetto prison camp replicating the desaturated colors and bluish tint of the previous season, Anne’s group being more gritty, the re-education camp bathed in browns, and Lexi’s Shangri-la being bright and colorful. Contrast, which was something of an issue with the third season Blu-ray release, is not the case here, with deep blacks that rarely crush and whites that are never blown out. When an episode cuts to commercial break, it cuts to black (not gray as was prevalent on season three). Compression artifacts are non-existent, a major improvement over the heavily compressed 1080i cable and satellite broadcasts on TNT. Each disc contains six episodes.

The Dolby TrueHD 5.1 soundtrack gets a major improvement over the heavily compressed Dolby Digital 5.1 track used in the cable and satellite broadcasts, taking full advantage of the increased bandwidth and fidelity of the lossless Dolby TrueHD codec. The entire soundstage opens up nicely, with increased separation, better bass response, and what appears to be much more active surround channels (although, according to the sound designers, nothing is changed in the mix except the bit rate when the broadcast tracks are created). Dialogue remains intelligible and never gets lost in the mix, reproducing mostly out of the center channel. Each episode is near reference quality.

Tom Mason: A Man of Tomorrow (1080p; 20:42): A character study of Tom Mason, told through interviews with the cast and crew.

Episode Guide: A four page insert that includes brief summaries of each episode.

UltraViolet Digital Copy: An insert is included with a redemption code and instructions on how to obtain UltraViolet digital copies of the fourth season.

An improved storyline and video presentation for this fourth season of TNT’s popular science fiction series make this a must-have for fans of the show, but the bulk of the special features are nothing more than promotional fluff ported over from the website. The major exceptions are the documentary on Tom Mason and the 2014 Comic Con panel, which was recorded halfway through the season. The fifth and final season debuts on TNT on Sunday, June 28, 2015.

We have a copy of season 4 to give away. To enter just list your favorite character from the series. Contest runs through 6/24. Winner will have until 6/27 to respond with mailing address or new winner will be chosen. Shipping address must be in US or Canada.

Capt. Weaver (Will Patton) is my favorite character. I'm hoping the series goes out with a great season. Last season started poorly but it rallied late.

Pope is my favorite!

I agree with a few others about Pope. While he can drive you nuts most of the time, Pope's character is a lot more complex and deep than most/all of the others. On the surface, a tough "I look out only for number one" kind of guy, but he has moments of pure heroism when faced with situations that nobody else wants to do. He is conflicted between what he has done his whole life vs. being the person to step up and save the day vs. someone just being scared out of their mind about the aliens. He is definitely more of a "real" character than anyone in the Mason family who always seems to be a bit "too lucky" all of the time. Weaver is a good second.
D

Ben, is my favorite character, because he gets all the girls and what not!
T

I'll go with the rather tough and gritty Capt. Weaver.

Funny how it's the 2nd Massachusetts, but nobody has a Boston accent.

Tom Mason is my favorite.

Tom Mason
You must log in or register to reply here.