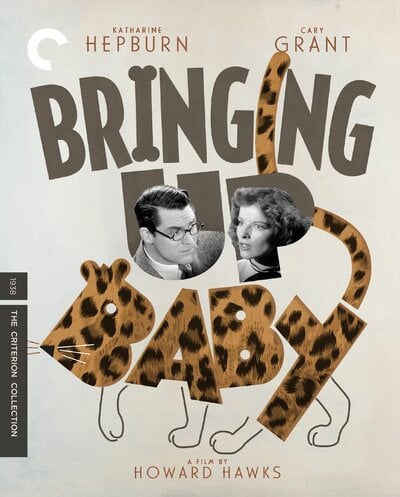 ​
Screwball sparks fly when Cary Grant and Katharine Hepburn let loose in one of the fastest and funniest films ever made—a high-wire act of invention that took American screen comedy to new heights of absurdity. Hoping to procure a million-dollar endowment from a wealthy society matron for his museum, a hapless paleontologist (Grant) finds himself entangled with a dizzy heiress (Hepburn) as the manic misadventures pile up—a missing dinosaur bone, a leopard on the loose, and plenty of gender-bending mayhem among them. Bringing Up Baby’s sophisticated dialogue, spontaneous performances, and giddy innuendo come together in a whirlwind of comic chaos captured with lightning-in-a-bottle brio by director Howard Hawks.

One of my favorite Cary Grant films and a nice selection of extras on the Blu-ray.

Right, but we knew it was coming and probably from Criterion.

Really glad this is coming. A few posters I would have preferred for cover. I'm very glad to see it coming, but a little disappointed it's from Criterion rather than Warner Archive.

ScottHM said:
I'm very glad to see it coming, but a little disappointed it's from Criterion rather than Warner Archive.

This may end up being a title, like Philadelphia Story, where Criterion created a master from a source outside of whatever holdings Warner had. It’ll be interesting to see when the “about the transfer” notes come out what the actual source element used was.

YES. Been waiting since the early days of BD. And in time for B&N's July sale if there is one.

ScottHM said:
I'm very glad to see it coming, but a little disappointed it's from Criterion rather than Warner Archive.

Why? We wouldn’t have all the great bonus features if it came from Warner’s. As for quality, it’ll be pretty much as perfect.
P

battlebeast said:
Why? We wouldn’t have all the great bonus features if it came from Warner’s. As for quality, it’ll be pretty much as perfect.
Click to expand...

My fear is that this film was offered to Criterion because the image quality may not have been up to the high standards of the Warner Archive. Also, it will cost more from Criterion and bonus features are generally not of much interest to me.

Having said that, there is no way I'm not going to get this.

My all-time favorite screwball comedy. It never gets old and have watched it many times and it always makes me laugh. Can't wait to see what this transfer looks like and look forward to some of those enticing bonus features, too.

We knew this day was coming, after they released The Philadelphia Story and His Girl Friday it was only a matter of time before this classic would get it's time in the spotlight.

I hope Arsenic and Old Lace is next.
J

I’m hoping the extra on Linwood Dunn has some of the raw special effects footage that was shown in the RKO documentary!

Either way, this is a no-brainer, day one purchase for me.

I’m currently reading Scott Eyman’s new Cary Grant biography and looking forward to his special feature interview.
You must log in or register to reply here.