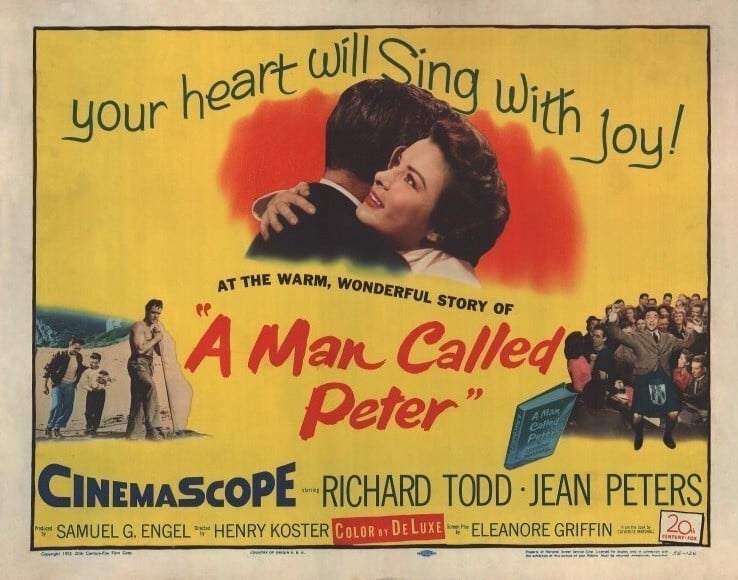 Thanks for the review. I have seen this but, unfortunately, not a repeater!

Even though it’s probably not the greatest movie, I think I will have to get it just because I love to collect 2.55:1 CinemaScope with 4-track stereo sound.

This is a very fair and thoughtful review. Thanks!

I'm grateful to Nick Redman and Twilight Time for getting this out on Blu.
It was one of my grandfather's favorite pictures, and he was nominated for a DGA Award for it. I continue to have the plaque for his nomination at home.

Thanks so much for sharing, Kevin - very cool.

I’ve never disliked a Henry Koster picture. Some are more to my tastes than others but whenever I see his name in the credits, I know I’m about to see a well-directed film, and this was no exception.

Peg and I watched this film (on TT's Blu-ray) the other night.

I had been looking forward to it for a long time.

I was a bit familiar with the protagonists as Peg writes for Guideposts magazine--a place where Catherine Marshall was one of the beloved writers who helped launch Norman Vincent Peale's publication back in the late 40s and 1950s. .

Surprisingly, Peg was bored with much of the tale while I was enraptured by the small mini-stories that were contained within the greater arc of Peter Marshall's life story. I was especially interested to see how they each dealt with the various health crises which beset them and loved the way the story showed how each leaned on their Faith and ability to interact with God to see them through. Both Todd and Peters were terrific in the roles and especially Todd's portrayal of Marshall's legendary sermonizing ability was one of the highlights of the film.

The film even rings with contemporary relevance as the gist of the story is that an immigrant arrived in this country, work hard and achieve greatness in his field. Peter Marshall was born and raised in Scotland and arrived on these shores, worked hard to afford his education, then worked hard at his trade, became a US citizen and rose to become pastor of the New York Avenue Church in Washington DC and chaplain of the US Senate.

I'm actually not sure which sound mix I listened to (I went with the default, not realizing I had a choice), but I found the music mix to overwhelm the dialogue and was constantly riding the volume on my receiver up and down whenever the music swelled dramatically or a hymn was inserted into the script. A minor annoyance as I found both dialogue and music to have great fidelity and be crystal clear.

The video was absolutely beautiful and the shots of Washington, DC in the 1950s were just gorgeous and made me yearn for a simpler pre-9-11 time.
You must log in or register to reply here.