Forum List What's new Dark Style Change width
Log in Register
What's new Search
Menu
Log in
Register
Navigation
Install the app
More options
Dark Style
Close Menu
Posted on January 31, 2019 by Josh Steinberg
You are using an out of date browser. It may not display this or other websites correctly.
You should upgrade or use an alternative browser.
True-life story of famed pastor told in glorious CinemaScope 3.5 Stars

Based on the true story of Peter Marshall, a poor Scottish boy who would grow up to become a beloved pastor and eventual chaplain of the United States Senate, A Man Called Peter is a paint-by-numbers biopic that is notable mostly for its leading performance and CinemaScope presentation.

A Man Called Peter, a 1955 drama based on the life of pastor Peter Marshall, is a fairly bland biography of its subject that is somewhat salvaged by a charming leading performance from Richard Todd and sturdy direction from Henry Koster. Utilizing the wide CinemaScope frame, Koster is able to make the film work better than it might have in lesser hands. The film has the potential to be stuffy, old fashioned and overly reverent, and if the script falls into that trap for the final act, the opening and especially middle sections have some genuinely riveting moments.

As a young boy growing up in a Scotland, Peter Marshall has an unquenchable love of the sea and a strong faith. Saving his money, he earns enough for passage to America, where he enrolls in divinity school. Assigned to a small town upon graduation, his sermons capture the town’s attention, and also draw the attention of a young woman named Catherine (Jean Peters), who will become his wife. After their honeymoon, Peter accepts a job at a well-known but little-attended church in Washington DC, and his sermons and genial manner are soon drawing ever larger crowds. But while the Marshalls are soon blessed with the arrival of a son, first Catherine and then Peter will be tested as they face unexpected health complications.

Based on Catherine’s biography of her husband, A Man Called Peter portrays its protagonist as a near-saint. While this doesn’t allow much of an arc for the film to trace of his character, it does present an opportunity for Richard Todd to win the audience, first with his charm, and later with a series of pleasant sermons which the screenwriter Eleanore Griffin has scripted to be universally rousing. The script’s ever-present halo over Peter makes it hard to truly know him, but at the same time, makes his character’s presence a reassuring one.

A Man Called Peter is presented in its original aspect ratio of 2.55:1. Colors are generally strong, and the image is stable. Though the film isn’t particularly sharp, this seems more characteristic of early CinemaScope lenses rather than being a fault of the transfer. There are some minor instances of dirt and debris that come and go for brief moments throughout the film, along with some occasional smaller scratches. While none of this is terribly intrusive, and the onscreen action is always discernible, this transfer is perhaps a notch below the high quality CinemaScope transfers that Twentieth Century Fox has been providing Twilight Time lately. It’s still quite good but falls short of perfection.

The disc provides two audio options, both in the lossless DTS-HD MA format: a 4.0 mix and a 2.0 mix. Of these, the 4.0 is the preferred option, featuring directional dialogue and a very wide front soundstage. Dialogue is well-mixed and always discernible, and the directional dialogue can be quite lively. The 2.0 track has less separation but similar fidelity. There are some faint traces of hiss from time to time, but it’s unobtrusive and not a distraction.

Audio Sermon by Peter Marshall (26:54, SD) – An audio recording of a sermon from the real Peter Marshall is illustrated by a series of contemporary photographs showing the real-life locations often dramatized in the film.

Fox Movietone Newsreels (22:40, SD) – A series of mostly silent black & white newsreel footage strung together without context or explanation. While the footage undoubtedly contains some noteworthy events, the lack of any kind of title cards, subtitles or explanatory introduction makes it difficult for the viewer to tell what they are looking at.

Original Theatrical Trailer (2:19, SD) – Cropped to 1.85:1, the trailer emphasizes the film’s real life and literary origins. Though viewers who have seen the film may quibble with this, the trailer describes the film as “light hearted” and “lifting.”

A Man Called Peter is a mostly unremarkable film, perhaps most notable for its charming lead performance and its use of the CinemaScope frame. The transfer provided by Twentieth Century Fox for this Twilight Time release is perhaps a touch under the high standards they’ve recently set for CinemaScope titles, and the inclusion of newsreel footage without any context renders a key bonus feature more frustrating than insightful. However, it is still a quality presentation, and fans of the film should be mostly satisfied with this release.

Thanks for the review. I have seen this but, unfortunately, not a repeater!

Even though it’s probably not the greatest movie, I think I will have to get it just because I love to collect 2.55:1 CinemaScope with 4-track stereo sound.

This is a very fair and thoughtful review. Thanks!

I'm grateful to Nick Redman and Twilight Time for getting this out on Blu.
It was one of my grandfather's favorite pictures, and he was nominated for a DGA Award for it. I continue to have the plaque for his nomination at home.

Thanks so much for sharing, Kevin - very cool.

I’ve never disliked a Henry Koster picture. Some are more to my tastes than others but whenever I see his name in the credits, I know I’m about to see a well-directed film, and this was no exception.

Peg and I watched this film (on TT's Blu-ray) the other night.

I had been looking forward to it for a long time.

I was a bit familiar with the protagonists as Peg writes for Guideposts magazine--a place where Catherine Marshall was one of the beloved writers who helped launch Norman Vincent Peale's publication back in the late 40s and 1950s. .

Surprisingly, Peg was bored with much of the tale while I was enraptured by the small mini-stories that were contained within the greater arc of Peter Marshall's life story. I was especially interested to see how they each dealt with the various health crises which beset them and loved the way the story showed how each leaned on their Faith and ability to interact with God to see them through. Both Todd and Peters were terrific in the roles and especially Todd's portrayal of Marshall's legendary sermonizing ability was one of the highlights of the film.

The film even rings with contemporary relevance as the gist of the story is that an immigrant arrived in this country, work hard and achieve greatness in his field. Peter Marshall was born and raised in Scotland and arrived on these shores, worked hard to afford his education, then worked hard at his trade, became a US citizen and rose to become pastor of the New York Avenue Church in Washington DC and chaplain of the US Senate.

I'm actually not sure which sound mix I listened to (I went with the default, not realizing I had a choice), but I found the music mix to overwhelm the dialogue and was constantly riding the volume on my receiver up and down whenever the music swelled dramatically or a hymn was inserted into the script. A minor annoyance as I found both dialogue and music to have great fidelity and be crystal clear.

The video was absolutely beautiful and the shots of Washington, DC in the 1950s were just gorgeous and made me yearn for a simpler pre-9-11 time.
You must log in or register to reply here. 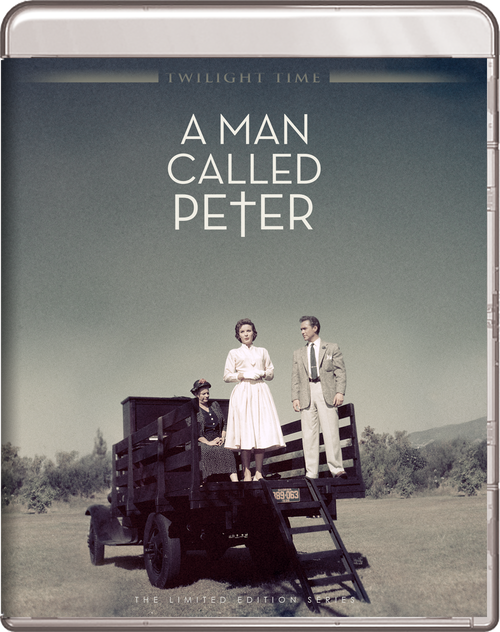