One of the great musical farces of Broadway, A Funny Thing Happened on the Way to the Forum gets a decent if occasionally uninspired treatment on its way to the cinema. Richard Lester, known far and wide as a great film comedy director, seems a bit at odds and ends in dealing with a musical which has cut about half of the stage numbers and never seems sure if it’s a stage piece or a movie. A hybrid in just about every way possible, Forum still incites big laughs, but they’re a pittance to what a well-directed stage version can bring forth. 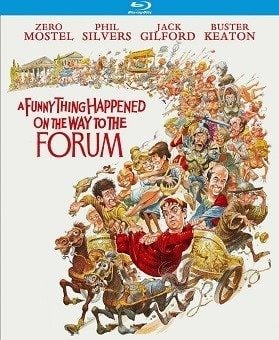 Roman slave Pseudolus (Zero Mostel) wants his freedom above all other things, and he finally hits on a way he can get it. If he can deliver a virginal courtesan Phylia (Anette Andre) living next door in the House of Marcus Lycus (Phil Silvers) to his young master Hero (Michael Crawford), he’ll be granted his freedom. But there are, of course, complications. Phylia has already been promised to Roman general Miles Gloriosus (Leon Greene), and Hero’s henpecked father Senex (Michael Hordern) has also gotten a gander at the young maiden and wants her for himself for at least a quickie before his harridan wife Domina (Patricia Jessel) returns from a trip. Pseudolus, ever hatching plans and schemes, tries numerous tricks and lies to work things out, but instead things seem to get worked into greater and greater muddles that even faithful slave Hysterium (Jack Gilford) can’t figure a way out of.Almost everything that’s remotely funny verbally in the screenplay by Melvin Frank and Michael Pertwee comes straight from the hysterical Broadway libretto by Burt Shevelove and Larry Gelbart. In expanding the single stage set for the film, Lester chooses very unusually to concentrate on close-ups of the actors especially in the film’s first half freeing him from having to find any interesting comic blocking for his stageful of clowns. The few musical numbers that remain from the original score by Stephen Sondheim get cinematic "flash edit" treatments even if the opening “Comedy Tonight” (the pick of the score) lazily incorporates clips from the film to come instead of coming up with ingenious new shots to complement the vocals. The lovers’ love ballad “Lovely” and its comic reprise later by Pseudolus and Hysterium get parallel treatment (though the second version doesn’t make sense to have the two slaves romping idyllically since they’re not the ones in love), and the film’s two big remaining comic numbers “Everybody Ought to Have a Maid” for the four comic male stars Mostel, Silvers, Horden, and Gilford (minus one verse) and “Bring Me My Bride” for Miles don’t earn the same amount of expected hilarity that they bring forth on stage. Lester makes sure he spends more than adequate amounts of time on the introduction of the courtesans, but a farcical comic chase in chariots that climaxes the picture is more frantic than funny and really has nothing to do with Forum.Reprising their performances from the stage, Zero Mostel and Jack Gilford do the best they can with some of their best musical comedy material taken away (Mostel loses two solos, Gilford one) but effectively scale down their performances for movies and never (well, hardly ever) resort to popped eyes or frantic double takes in creating their funny characters. Leon Greene who played Miles in the London production of the show offers a splendid bombastic performance both in song and spirit. Second-billed Phil Silvers (who was originally offered the role of Pseudolus in the Broadway original and who later played it in a revival and won a Tony Award) has been given a little more to do as Lycus to justify his billing and stardom. With songs eliminated, Michael Hordern’s Senex and Patricia Jessel’s Domina have much less to do in the movie than their stage counterparts do, and Michael Crawford and Anette Andre are agreeable young lovers, his voice less squeaky here than it would prove to be in Hello, Dolly! a few years later. Buster Keaton has some funny bits as an elderly farsighted Roman citizen who’s more a part of the mêlée than anyone suspects, and Inga Neilsen as the courtesan of Pseudolus’ choice says nothing but looks simply scrumptious doing it.

The film’s original 1.85:1 theatrical aspect ratio is faithfully rendered in a 1080p transfer using the AVC codec. This is one of the best of the recent Kino Lorber Studio Classics with a generally sharp and clear picture with nice amounts of detail (only some age-related dust and dirt pop up during the chariot chase at the end). Color is nicely saturated (if a touch brownish) with realistic flesh tones for all, and contrast has been applied with considerable consistency. The film has been divided into 8 chapters.

The DTS-HD Master Audio 2.0 stereo sound mix offers exceptionally clear dialogue in the center channel and an impressive spread of Ken Thorne’s Oscar-winning music adaptation in the appropriate channels. Sound effects don’t always carry a great amount of impact (the crashes in the chase scene seem rather anemic), but this is a well above average sound mix of its era.

A Funny Thing Happened on the Way to the Forum doesn’t live up to the absolutely hysterical hilarity of its stage counterpart, but the film does preserve some of the legendary performances that brought acclaim to some of these star comics, and with a very good video and audio transfer is an easy recommendation for purchase.

I really like this movie! Having never seen a theatrical presentation of the show, I enjoy it for what it is .

A reference to the song 'FREE" comes up in the finale sounding like a reprise. I would speculate that this number was also shot and later deleted. Despite the loss of so many good songs, the film adaptation retains the spirit of the Broadway show and is hilarious for the most part. As it has more 'adult content' than the popular family-oriented musicals of the era, I'm guessing UA were apprehensive about filming it as a musical comedy as opposed to a comedy with music.
Richard (HELP!) Lester's frantic editing was his trademark and very "in " in the '60's and dates the movie now. Great to have Zero Mostel's Broasdway performance preserved on film- I'm sure he was unhappy not to be asked to do the movie of FIDDLER ON THE ROOF. The "romping through the flowers" segment in 'Lovely' with Gilford in drag is a parody of the same sequence in the first rendition of the song and quite funny. The Mad magazine-style artwork on the original posters for this movie is terrific- I must frame my One Sheet soon. Thanks again Matt.
P.S. I think this show owes a lot to Eddie Cantor's ROMAN SCANDALS and Rodgers and Hart's THE BOYS FROM SYRACUSE (as does THE THREE STOOGES MEET HERCULES ...)

I have always loved slapstick, if it's inventive and well-choreographed. I loved the Three Stooges, and still (at age 64) find them very amusing. Laurel & Hardy, the silent Sennett shorts, etc. My favorite part of WHAT'S NEW PUSSYCAT is the go-cart race at the end, as ridiculous as it is, and it had me on the theater floor laughing at age 15. Similarly, the chariot chase in this film remains my sequence of choice, even though, as the reviewer cited, it has nothing to do with the plot or the original play and is superfluous. I still think it's laugh-out-loud funny, because it's physical and manic, with some great gags. That's just me, maybe, but there it is.

There was a revival in the 90's with Nathan Lane and later Whoopi Goldberg.

There have been at least two major revivals (Silvers as Pseudolus, and Nathan Lane as Pseudolus) of Forum. No one who has seen the movie would want to see the stage show, as they'd be sure it stunk. Lester turned it into a series of "director's ego" setpieces. I saw it when originally released and have no interest in ever laying eyes on it again. This reviewer is way too generous with the Production Rating. I'd have given it a 2 at most. I'll take his word that the transfer is beautiful. I'd have to see it again, and that's too much to ask.

How is it director's ego set pieces when the first half of the film is primarily closeups (as the review states)? I am totally confused by comments on this film. Guess I'll just have to see it.

I was very disappointed in the film adaptation. Seemed very disjointed and frantic.

Not only have I seen the most recent Broadway revival, I myself have been in two local productions of the work down through the years: in my younger days as a Protean and a few years ago as Senex.

To me, the film's chief value is preserving some of what Mostel did on film (especially since he didn't get to do the film of his other famous Broadway role, "Fiddler On The Roof"). But the absence of over one-half of the score including the very important "Free" is always going to stick out like a sore thumb. I saw the 97 Broadway revival with David Alan Grier (who had taken over from Goldberg, don't ask me how they rewrote the libretto to accommodate her casting!) and also have an audio recording of the 72 revival with Silvers and Larry Blyden and there's no question the stage version is superior, though some things like the chase finale understandably had to be changed for the film medium. But why "Free" was cut since it is the most important song for Mostel (and you would have figured Lester could have gotten some comic edits depicting the lyrics!) I will never understand.
You must log in or register to reply here.