Forum List What's new Dark Style Change width
Log in Register
What's new Search
Menu
Log in
Register
Navigation
Install the app
More options
Dark Style
Close Menu
Posted on February 1, 2021 by Matt Hough
You are using an out of date browser. It may not display this or other websites correctly.
You should upgrade or use an alternative browser.
Magnificent adaptation of the Dickens classic. 4.5 Stars

“It was the best of times, it was the worst of times” wrote Charles Dickens in the opening lines of his brilliant novel A Tale of Two Cities, describing not only conditions in his own England of the mid-19th century but also describing the conditions of late-18thcentury France which led to the citizens’ uprising and inevitably the French Revolution. In his final producing effort at MGM before leaving to begin his own independent film studio, David O. Selznick once again plumbed classic literature for material resulting in a rousing achievement showcasing MGM at the height of its powers and featuring one of Ronald Colman’s best performances as the tragic Sydney Carton.

After suffering unjustly in the Bastille for nearly two decades, Dr. Manette (Henry B. Walthall) is released and nursed back to health in Paris by husband and wife wine merchants Ernest (Mitchell Lewis) and Therese (Blanche Yurka) De Farge, the couple quietly quelling their grudges against the French aristocracy in general and the St. Evrémonde family in particular. When the Marquis St. Evrémonde (Basil Rathbone) runs down a small child in the street and then worries only about the health of his horses, it’s the final straw that spurs the French peasants into revolt. Meanwhile, in England, St. Evrémonde’s nephew has changed his name to Charles Darnay (Donald Woods) and fallen in love with Dr. Manette’s daughter Lucie (Elizabeth Allan). She chooses him over Sydney Carton (Ronald Colman), a brilliant but alcoholic London barrister who’s drinking his life away feeling his life has no real purpose. After the murder of St. Evrémonde, the De Farges plot to lure Darnay back to England so they can destroy the entire St. Evrémonde clan, but when Therese learns that Darnay is married and has a child, she can think of nothing but killing them all.

Charles Dickens’ classic historical melodrama has been adapted for the screen by W.P. Lipscomb and S.N. Behrman, the first and best of its sound adaptations (there were several silent versions of the tale). As with so many of Selznick’s literary adaptations earlier (Little Women, David Copperfield) and later (Tom Sawyer, Gone with the Wind, Rebecca, A Farewell to Arms), there is a real semblance of faithfulness to the source material even though it would have been impossible to bring the lengthy novel to the screen fully intact in a two-hour movie. And with the mighty MGM production team and facilities on hand, there is no worry about indicating the sheer size and depth of the revolution by the people. Director Jack Conway (with an alleged assist from Jacques Tourneur and Val Lewton) stages the storming of the Bastille brilliantly from above and from all directions astounding the viewer with the massive sets and thousands of extras involved in the storytelling. He also manages to keep the narrative clear despite switching constantly back-and-forth from London to Paris as multiple storylines converge into the tale’s tragic but noble conclusion. He handles the brutal executions with as much directness as the Production Code at the time would allow and deals with the smaller scenes with a careful, subtle touch, too: the Manettes attending a Christmas church service (which casts Lucie Manette particularly in an angelic light), the disquieting henchwoman known as The Vengeance (Lucille LaVerne) handing a toy guillotine to the Darnay’s young daughter, a fight to the death between Lucie’s loving governess (Edna Mae Oliver) and the vile Madame De Farge, and a quiet, very moving scene between Carton and a peasant seamstress (Isabel Jewell) as they steel themselves for their inevitable fate.

Ronald Colman was never better than as Sydney Carton, drunk for a goodly portion of the movie (while still offering his solicitor friend Stryver – Reginald Owen – his expert legal assistance) and speaking those magnificent final lines with the noble intonation that was Colman’s alone. Two of MGM’s unparalleled stock company offer their one-of-a-kind expertise: Basil Rathbone as the haughty, supercilious Marquis St. Evrémonde and Edna Mae Oliver as the sharp-tongued, determined governess Miss Pross. Both should have been Oscar nominated along with movie as Best Picture, but Rathbone’s nomination that year came for his Tybalt in Romeo and Juliet rather than for this, and Oliver’s omission, along with the snubbing of Blanche Yurka’s breathtakingly snarling performance as Therese Dr Farge, is unforgiveable. You’ll quickly recognize Lucille LaVerne’s cackling The Vengeance as the inspiration for Disney’s evil queen/hag in Snow White and the Seven Dwarfs, and Elizabeth Allan, Reginald Owen, and Mitchell Lewis all give seasoned, professional performances in their respective roles. Donald Woods may not exert much charisma as Charles Darnay, but adequate compensation is provided by the tasty supporting playing of Walter Catlett as Carton’s friend Barsad and H.B. Warner as Gabelle who issues an accurate prophecy about the upcoming rebellion.

The 1.37:1 theatrical aspect ratio is faithfully reproduced in this 1080p transfer using the AVC codec. It’s a gorgeous black and white image, very film-like, with superb contrast and a grayscale that produces crisp, clean whites and astonishingly deep blacks. Sharpness is acute (occasional soft focus is applied to the stars in close-up, of course), and there are no film anomalies to expose the film’s eighty-five years of age. The movie has been divided into 45 chapters.

The DTS-HD Master Audio 2.0 mono sound mix is solid if not quite perfection. There is some attenuated hiss that can be heard in the quieter scenes, but it’s never too distracting, and there are no problems with flutter, pops, or crackle. The dialogue is easily discernible and has been mixed with Herbert Stothart’s background music (much of it carols and other familiar tunes), and the sound effects with surety.

Radio Adaptation (58:30): a 1942 Lux Radio Theatre adaptation of the film starring Ronald Colman and Edna Best and hosted by Cecil B. DeMille.

Great review Matt! I was getting ready to watch the DVD of this when I heard about the Blu-ray release; so I will wait until the disc arrives.

Your review hits some of my favorite highlights of this film. I liked your mention of the "angelic" Elizabeth Allen in the scene where she lights the candle for Sidney and we see her through his eyes (the entire Christmas sequence is beautifully done, fake snow and all). Tremendous film that I can't wait to see on Blu-ray.

Great review, Matt! Can't wait to get my hands on this one!

I saw this remaster on HBO Max and it was, indeed, delicious. Thanks for the great review, Matt!

As regards the Oscars, I'm afraid CITIES may have been another victim of short memories on behalf of the voters. It opened in New York City (at the Capitol) on Christmas Day 1935 but didn't open in Los Angeles (at both Loew's State and Grauman's Chinese) until January 8th, which made it ineligible for the 1935 awards and forced it to compete in the 1936 race. Voting relied on the memories of the Academy and, since that voting didn't take place until early 1937, it simply wasn't uppermost in their thoughts at the time. It managed a Best Picture (or "Outstanding Production") nomination and a Best Editing nomination but it seems as though no one remembered the actors or the director by the time it came around.
Last edited: Feb 1, 2021

David_B_K said:
Great review Matt! I was getting ready to watch the DVD of this when I heard about the Blu-ray release; so I will wait until the disc arrives.

Your review hits some of my favorite highlights of this film. I liked your mention of the "angelic" Elizabeth Allen in the scene where she lights the candle for Sidney and we see her through his eyes (the entire Christmas sequence is beautifully done, fake snow and all). Tremendous film that I can't wait to see on Blu-ray.
Click to expand...

When it snows in those big fluffy flakes here in Toronto I always tell people.."It's MGM snow" and this is the very scene I am thinking about.

Chewy snow.
You must log in or register to reply here. 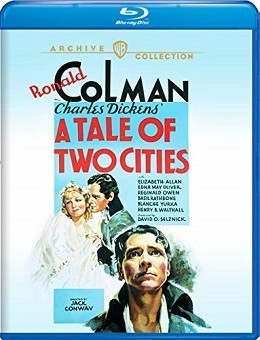