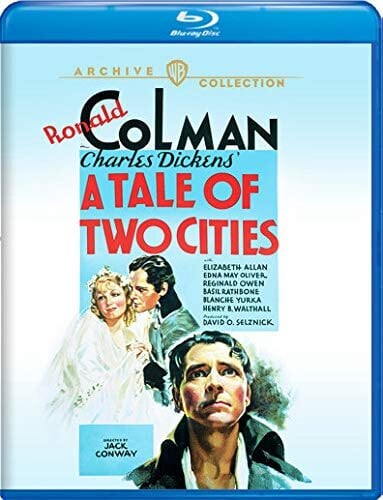 NEW 2020 1080p HD master!
A TALE OF TWO CITIES (1935)
Run Time 126:00
Subtitles English SDH
Audio Specs DTS HD-Master Audio 2.0 - English, MONO - English
Aspect Ratio 1.37:1
Disc Configuration BD 50
Special Features: Audioscopiks (MGM short); 2 Classic Cartoons 'Hey, Hey Fever' and 'Honeyland'; Radio adaptation with Ronald Colman; Trailer
“It was the best of times, it was the worst of times…” Charles Dickens’ tale of love and tumult during the French Revolution comes to the screen in a sumptuous film version by the producer famed for nurturing sprawling literary works: David O. Selznick (David Copperfield, Anna Karenina, Gone with the Wind). Ronald Colman (The Prisoner of Zenda) stars as Sydney Carton – sardonic, dissolute, a wastrel…and destined to redeem himself in an act of courageous sacrifice. “It's a far, far better thing I do than I have ever done,” Carton muses at that defining moment. This is far, far better filmmaking too: a Golden Era marvel of uncanny performances top to bottom, eye-filling crowd scenes (the storming of the Bastille, thronged courtrooms, an eerie festival of public execution) and lasting emotional power. Revolution is in the air!

I thought the HBO Max stream looked great so this isn't unexpected.
P

One, in a series of remaining thanks and gratitudes to George Feltenstein.

Yes!!! Another nominee for my collection!!

The best of times for the worst of times ... Kudos to WA ...
You must log in or register to reply here.