American Ballet dancer Suzy Bannion (Jessica Harper) arrives at the elite German Tanz dance academy in a blinding rain storm as another student is fleeing. While she is refused entry, she returns the next morning to find that the woman she saw trying to escape, is now dead under violent circumstances. Putting her nerves behind her Suzy quickly rises in stature at the academy, under the tutelage of Miss Tanner (Alida Valli) and Madame Blanc (Joan Bennett). She also enlists the other students to investigate the academy as odd things keep occuring, including a maggot infestation, strange lights and illnesses, and further deaths as well. Ultimately Suzy uncovers the secrets hidden below: The dance company is a front for an ancient witches coven led by Mother Suspiria, the witch of sighs.

Suspiria is a cult classic based on it’s use of splashy color and the hypnotizing audio of Italian band Goblin. In theatrical 4.0 surround audiences had likely never experienced such dramatic and enveloping sound before and the film was the first to employ three strip technicolor, as made famous by The Wizard of Oz. What it built up in splash and terror, it didn’t match in solid acting performances or entirely believable plot.

Somehow I never saw Suspiria until the Bluray release last year and I pined for a true UHD experience bringing HDR and Atmos sound to the party. We had to wait but both of those are on board and they were worth the wait. We also get a truckload of extras along for the ride, and they are worth diving in to as well.

The allegorical tale of a fish out of water besting an ancient cult as they attempt to bring her into the fold has been mined many times but few live up to the effort to make such a dramatic and overwhelming denouement as Suspiria does. Director Dario Argento has made a career of these types of films tho, and Suspiria might be the highlight of his output, and certainly is the best known of his 3 witches trilogy.

It was hard for me to look at Suspiria with anything but 2018 eyes when I saw it, and it took a lot to imagine what kind of impact it would have had on me had I seen it soon after it came out (I was 7 in 77). There’s not much to the plot but the oozing color, over the top sound, and the bubbling sexuality of the dancers likely would have had much bigger impact then than they did now on me. It all seemed so goofy in it’s over the top seriousness and attempted shock. Ultimately I was impressed with it technically but not in any way as a compelling story.

Suspiria is a master class in how mid 70s era films can be restored to better than theatrical quality in 2019. The vibrant Technicolor imagery is a thing of beauty when matched with HDR monitors that simply would not have existed 5 years ago, let alone 40. It’s remarkably sharp too, and despite the dark environs in which it takes place grain is ever present but never distracting. It simply looks beautiful and better than ANY other film of it’s era. I’d be incredibly happy to have something like, say, A New Hope, look this good =) The meticulous architecture, backgrounds, wallpapers, city streets, even the maggots look stunning.

I thought the audio on the Bluray sounded good last year but this Atmos track pumps that up even higher, with more data pushed around the room and coming from multiple height planes. There’s not a lot of bass action until the finale, but that can be forgiven after 90 minutes of Goblin chants chimes and drums swirling around your ears and lodging their hushed eeriness in your spine.

Not only is this release the best that this film has ever looked and sounded (yes beating any and every theatrical presentation) but it’s likely better looking and sounding than any other film of its vintage. While you may or may not be a bigger fan of the film than I am, there is no doubting its influence on generations of horror creators and fans alike. This release is simply a lesson in how to treat a beloved film right from all angles, technically, artistically, historically and with heart and passion.

Without a doubt this release comes “Recommended”. It’s an ‘experience’ more than a film, and one that can’t be replicated. Note that I reviewed the 2018 ‘reimagining’ and that film has its charms for sure, but it’s so different that it’s nigh on impossible to compare the two. 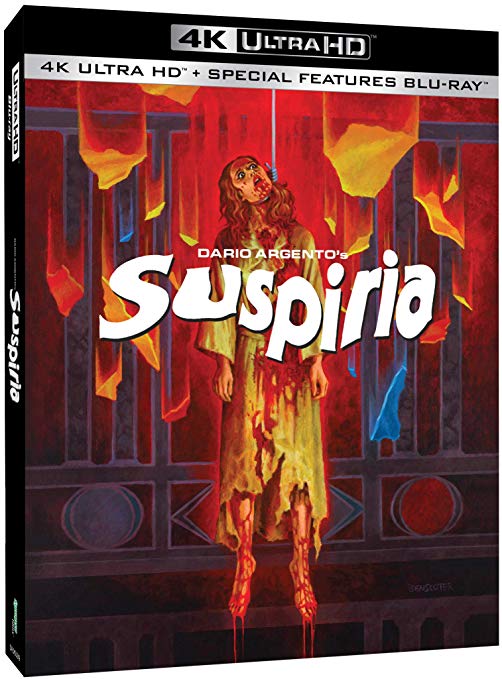