In the first year of the Academy Awards, two “first awards” (as they were then called) were given for outstanding productions of the year: William Wellman’s Wings won Best Production while the Best Artistic and Unique Production was awarded to F.W. Murnau’s Sunrise. Both silent films remain classics, and they couldn’t be more different from one another: the former a rousing World War I adventure epic with the latter being a more dream-like melodramatic parable of love lost and recovered. Though Wings was presented a year or so ago in an astounding Blu-ray restoration, don’t expect the same with Sunrise. The film still shines brightly, but the restoration from inferior elements can only partially bring back the film’s one-of-a-kind cinematic distinctiveness. 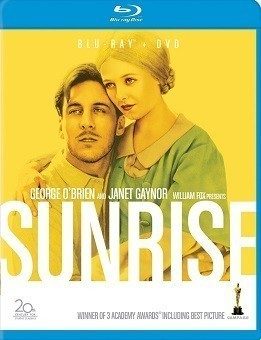 A young country husband and father (George O’Brien) has fallen under the spell of a metropolitan femme fatale (Margaret Livingston) who wants him to arrange an "accidental" drowning for his wife (Janet Gaynor) so she can take him back to the city with her. The husband is so under her spell that he almost goes through with the murder, but at the last minute he comes to his senses and realizes that his frail, loving wife isn’t deserving of such treatment. He spends a desperate amount of time trying to win back her love and trust, and the two spend an idyllic day in the city, but fate has other plans for them as they sail back home on a river while a calamitous storm approaches.While the story (screenplay by Carl Mayer, Katherine Hilliker, and H.H. Caldwell) may reek of a melodramatic structure that dates it by modern terms (the movie is basically three acts: love corrupted; love renewed, and divine retribution), F.W. Murnau’s treatment of the story, its characters, and their world is anything but commonplace. He’s brought his German expressionistic sensibilities to the project resulting in an astonishing display of cinematic savvy that has few equals in the silent or sound period of the late 1920s. There are long shadows, forced perspectives, and completely unique quadruple exposure framing shots that take one’s breath away. He uses montage, irises, flashbacks, and flash forwards in quick bursts rather than lingering over such techniques as was the usual way in the cinema of the time. He even has fun with the intertitles sometimes fading them in piecemeal and other times letting them dissolve as if they were melting. The lengthy center section as the couple rediscovers each other and the director revels in their joy of being together is filled with magnificent moments as the couple crashes a wedding, visits a tonsorial parlor, has a picture taken together, attends a carnival, drink and dance and genuinely fall in love all over again; it’s a great contrast to the film’s initial section filled with a brooding and foreboding that’s almost unbearable. Plus, the climactic storm on the river and the subsequent search for bodies by lamplight is surprisingly powerful and evocative. Little wonder the Academy deemed this the outstanding artistic creation of the year.Janet Gaynor won the very first Academy Award as Best Actress for three films with Sunrise as one of the ones contributing to her victory. She seems very mousy and fragile early on, but she gains in spirit and drive as the movie progresses and fairly radiates goodness throughout. George O’Brien has the harder role coming full circle from seduced victim to murderous beast, penitent husband, and eventually a determined if distraught victim once again. Margaret Livingston plays the vixen in a rather standard fashion, but she’s certainly effective. Bodil Rosing as the dutiful maid and Arthur Housman as an unwelcome masher make the most of their small parts.

The film is presented in its silent-with-soundtrack aspect ratio of 1.20:1 and is offered in 1080p resolution using the AVC codec. Unlike Wings which looked pretty spotless and astonishingly rich, Sunrise has been taken from a surviving print which had a fair share of scratches and specks throughout. Sharpness is above average (except when it’s meant to be soft and dream-like), and the grayscale can be impressive for an almost ninety-year old film which won the first Academy Award for Best Cinematography. Black levels in parts are good (though not consistently so), and whites are strong and solid. The film has been divided into 24 chapters.

The original 1927 Fox Movietone soundtrack with a score by Hugo Riesenfeld and assorted sound effects is presented in DTS-HD Master Audio 1.0 and was the sound mix used for this review. (There is also a Dolby Digital 2.0 mix with a score by Timothy Brock.) Fox engineers have cleaned up the sound elements beautifully resulting in a richer than expected mix with very good fidelity and little in the way of distracting artifacts.

European Silent Version: can be chosen from the menu. It runs 15 minutes shorter than the American version.Audio Commentary: ASC Cinematographer John Bailey comments on the film from the perspective of its photographic qualities. It’s an interesting view of the film, but one wishes a movie of this stature had been given a more historically in-depth commentary on the director, the actors, and the film’s place in the cinematic world.Outtakes (10:01, 9:20, SD): a montage of outtake sequences from the film can be viewed with John Bailey’s commentary or with text notations.Original Scenario (3:07, SD): Carl Mayer’s original story with annotations by F. W. Murnau. The time given is when viewed with automatic paging. The user can also page through manually.Original Screenplay (8:22, SD): the script can be paged through manually or automatically.Restoration Notes (0:38, SD): notes on the surviving print and soundtrack may be read manually (recommended) or put on automatic paging.Theatrical Trailer (1:51, SD)DVD: the standard definition copy of the film offers both the original American and European versions of the movie.

While not the eye-opening restoration that Wings offered on Blu-ray, Sunrise is an important work of the silent period which merits further exploration, and this Blu-ray release offers the best opportunity to accomplish this. Recommended especially for students of silent movie techniques in their last full flowering of greatness.

I think I'm amazed that Fox issued it on Blu ray at all. So, the video aspect of your review does not surprise me (would that anything Fox surprised me these days).

This went unannounced? I recall no advanve word at all..? Thankfully it sounds like the BFI blu which was my favorite birthday gift last year.

Yes, it was announced and discussed in this thread:

Can't wait to pick this up!

You know, I think I'm gonna stay with my DVD.

ahollis, don't do that. It really is worth the upgrade. What no one has mentioned so far (I think) is that the shorter European cut has a superior visual quality compared to the domestic version. This is far too important a film to be seen in a low grade transfer. I don't think you'll regret upgrading.

bujaki said:
ahollis, don't do that. It really is worth the upgrade. What no one has mentioned so far (I think) is that the shorter European cut has a superior visual quality compared to the domestic version. This is far too important a film to be seen in a low grade transfer. I don't think you'll regret upgrading.
Click to expand...

I'll rethink my decision but not sure.

Is the European cut in HD? This review fails to specify.
You must log in or register to reply here.