Posted on May 8, 2018 by Josh Steinberg
A portrait of 1950s suburbia that remains relevant today. 4 Stars

This expertly made drama from 1957 explores the darker sides of suburban life, from racism and sexism to unchecked consumerism, in surprisingly detailed ways. Though limited somewhat by the production code of the era, the film is remarkably honest and feels surprisingly fresh over sixty years after its original release.

Black and white CinemaScope. It’s impossible to discuss No Down Payment, an excellently-made 1957 melodrama from Twentieth Century Fox, without discussing the format in which it was made. When CinemaScope was first rolled out in the early 1950s, the license to use the format included a stipulation that all CinemaScope films had to be shot in color. Agreeing with this requirement, Fox’s president Darryl F. Zanuck even was quoted as saying, “We believe that any picture, regardless of subject matter, is better if made in color,” with Zanuck publicly chastising other studios who had tentatively announced plans to make black and white films in the anamorphic process. Those other studios backed down, and for the first three years of the format, from the 1953’s The Robe until 1956, all CinemaScope films were indeed in color. But in 1956, when studio head Zanuck took a leave of absence, Fox’s then-president Spyros P. Skouras was quoted as saying “20th Century Fox is no longer wholly committed to CinemaScope in color,” and the studio released its first scope film in black and white later that year. These are several probably reasons for this change of heart, ranging from the additional expense of shooting in color at a time when theatrical attendance was in doubt, to a growing understanding that black and white could be a creative tool in which to tell a story, rather than merely being a low-cost substitute for color. And so, the era of black and white CinemaScope was born, one of Hollywood’s most unique and striking format variations of all time.

As a signifier, black and white suggests many things. Paradoxically, while on first glance it may appear artificial to the majority of viewers who can see in color, it’s also come to be accepted as a truth-telling format. Documentaries are in black and white; newsreels are in black and white. The world as we know it, when seen on film, is often reflected back to us in that monochrome palate. CinemaScope, on the other hand, was designed to signify the opposite. CinemaScope is epic, CinemaScope is larger than life. Put the two formats together and it shouldn’t work, all of the signifiers tripping over each other, and yet, it works beautifully in No Down Payment.

The story of No Down Payment concerns four couples living in the fictional suburban community of Sunrise Hills, trying to make sense of their own paradoxes and conflicting realities. We’re introduced to the community when David and Jean Martin (Jeffrey Hunter and Patricia Owens) move into town, quickly striking up friendships with three other couples. David is an electrical engineer who loves his job, but is feeling pressure from his wife to move to the more lucrative sales field which he knows will be unsatisfying for him. Jerry Flagg (Tony Randall, in a rare dramatic role) is an alcoholic used car salesman who lives beyond his means and then drinks to cope with the pressure of trying to make ends meet, frequently embarrassing his wife, Isabelle (Sheree North). Troy Boone (Cameron Mitchell) is a war veteran who never received an education, stuck with an inferiority complex and a longing for a job as police chief that he may not be qualified for, while his wife Leona (Joanne Woodward) desperately wants a child but is otherwise unhappy in the marriage. Herman Kreitzer (Pat Hingle, working as the glue that holds both the community and the story together) is an appliance store manager more concerned with maintaining what little status he has rather than rocking the boat, while his wife Betty (Barbara Rush) hopes for more from him. Taken together, these couples represent a wide spectrum of attitudes, experiences and problems faced by a 1950s suburban community.

Though on first glance, this might seem an unlikely mixture of subject and setting for CinemaScope, director Martin Ritt uses the wider frame in ways that are frequently beautiful; by the end of the film, it’s obvious that he chose the right format in which to tell his story. Pay attention to his use of the wider frame. In one scene, he’s able to emphasize the closeness that the Martins initially feel as they move into town, which the couple sticking closely together in the center of the frame despite all of the room around them. In another scene, Ritt’s camera is able to demonstrate the growing distance between the Boones, as they move from being closer together in the frame to opposite ends, physically reflecting how far apart they’ve grown in their unhappy marriage. Throughout the film, Ritt’s framing evolves with the characters, showing which couples are able to find a measure of solace within each other, and which are facing fissures that may be beyond repair. This use of distance and negative space carries over the scenes involving characters and combinations other than the four main couples. Finally, the frame shows how trapped these characters have become, by circumstance, by luck, by choices made or not made, and by the moral codes and social contracts of their time.

Of the film’s major characters, Herman is the one whose story can feel the most tragic, not because he experiences the most drastic changes (probably the opposite, in fact), but because he seems to “get it” on a more instinctual level than his wife and neighbors. He’s the one to put voice to the idea that while, in theory, they live the good life, with every materialistic want fulfilled, that there’s an emptiness to a kind of living where the houses aren’t the only things that come prefabricated. Herman is the one who recognizes that they’re all living within a structure under which they have no control, and where the pressure to maintain what little they have often results in the exclusion of their own values. The pressure to conform, and the fear of loss, is too great a match for simple honesty and decency. Herman’s great tragedy is that he is all too aware of this and yet too paralyzed to strike out against it.

If the film has a weakness, it is that the production code of its time would only allow these subjects to be brought up to a certain extent. Without giving away any specifics, the ending feels like a compromise which doesn’t entirely fit with all that came before. It would seem that the penalty for mentioning the unmentionables of the time is that everything must be neatly resolved by the conclusion of the picture. The problems that our four couples face are larger than the film’s tidy resolution, and the ending of the film is the one part that doesn’t entirely ring true. But if that was the price to be paid to be allowed to explore the subject matter in the first place, it’s hard to fault the film too much for being willing to pay that price. In a way, the filmmakers are forced to live in the same delusion that the characters are faced with, that all of this struggle and uncertainty can have an easy answer.

No Down Payment is presented on Blu-ray is what Twilight Time has billed as a new 4K transfer from Twentieth Century Fox, appearing in its original 2.35:1 aspect ratio via the AVC codec. Though the CinemaScope lenses of the time were, as a rule, not as sharp as more modern lenses, the presentation here is excellent. The film looks pristine, with nary a hint of dust or debris, and features a very pleasing greyscale and brilliant clarity with natural grain.

The disc presents two audio options, both in lossless DTS-HD MA: a 5.1 remix which preserves the original directional dialogue, and a 2.0 stereo track which is more limited. Both are remarkably clear and generally free of age-related artifacts like hiss. Though both tracks are satisfactory, the 5.1 track is the preferred option here. Although most of the action in the 5.1 track is confined to the front channels, the use of directional dialogue enhances the picture without ever seeming gimmicky. Among the front channels, the soundscape is far more active than the subject matter might suggest.

Optional English SDH subtitles are also available on the disc.

Six Page Booklet – Julie Kirgo’s insightful essay takes a look at how the film examined difficult subject material, and draws parallels between a 1950s middle class neighborhood and one today. Her writing is complemented by a series of production stills and a reproduction of the film’s original poster art.

No Down Payment is an incredibly effective portrayal of the unspoken social issues of the 1950s, made all the more powerful by its willingness to engage difficult subject matter and conflicted characters. If the film’s tidy resolution can seem rushed and too definitive after a more ambiguous build-up, the richness of the film’s storytelling is too powerful to be set aside despite that flaw. The transfer provided is first-rate, with beautiful visuals and a very active soundscape. To this, Twilight Time has added an isolated score track and an insightful booklet. Unfortunately, this release lacks a trailer (which would have been interesting to see how the film was originally marketed) and does not include any other extras, like a commentary, which might help the viewer to better understand how a film like this came into being. Still, despite the light set of extras, the quality of the production itself and splendid transfer make this release well worth a look. 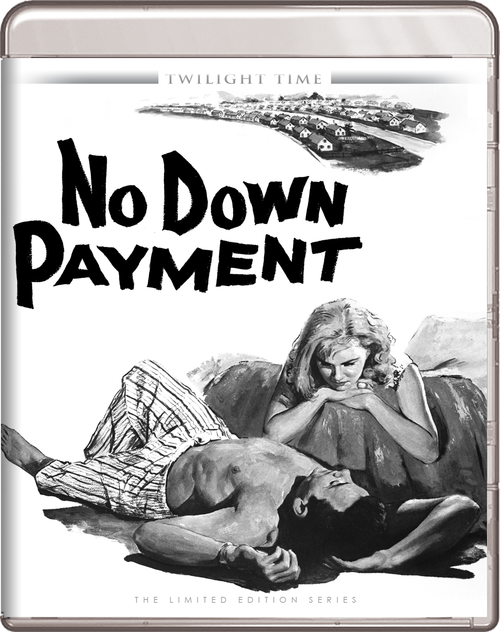