Forum List What's new Dark Style Change width
Log in Register
What's new Search
Menu
Log in
Register
Navigation
Install the app
More options
Dark Style
Close Menu
Posted on May 10, 2018 by Todd Erwin
You are using an out of date browser. It may not display this or other websites correctly.
You should upgrade or use an alternative browser.
Wakanda is gorgeous in 4K 4.5 Stars

Marvel Studios’ Black Panther succeeded where many others before it have failed, an origin story of a black superhero that ultimately earned over $1.33 billion at the worldwide box office.

Rarely does a Hollywood blockbuster take chances and cross cultural and racial boundaries in such a way that it becomes the ninth top-grossing movie of all-time like Marvel’s Black Panther, co-written and directed by Ryan Coogler (Creed), did earlier this year. Movie audiences were first introduced to this superhero character in 2016’s Captain America: Civil War, in which Prince T’Challa/Black Panther (Chadwick Boseman) witnessed the assassination of his father, King T’Chaka (John Kani) of the African nation of Wakanda. After arriving back home to be crowned the new King, T’Challa learns that black market arms dealer Ulysses Klaue (Andy Serkis) is about to sell a rare artifact made of vibranium (Wakanda’s natural resource) to an unknown American buyer in South Korea. That buyer turns out to be CIA operative Everett Ross (Martin Freeman), whom T’Challa met in Civil War. Klaue is captured after an exciting car chase through the streets of Busan, only to be freed by Erik Killmonger (Michael B. Jordan), who has an agenda of his own to take the throne in Wakanda and free the oppressed from around the world using weapons made with vibranium. We soon learn that Killmonger is the former King’s omitted fact, a long lost nephew of his that he orphaned in Oakland many years ago after killing his brother, essentially creating their own monstrous villain.

What helps Black Panther succeed is that director Coogler doesn’t hit his audience on the head with his message, telling his story more as an operatic tragedy. As evil, cunning, and violent as he is, we can see where Killmonger is coming from. He grew up not having much, fighting his way (quite literally) through school, college, and eventually the military, being trained as a mercenary, while T’Challa lived a life of privilege, rich with technology and a loving home. It is this two sides of a similar coin that drives much of Black Panther’s plot. It is also the very talented cast that all turn in excellent performances that make this movie such a pleasure to watch, from leads Boseman and Jordan, to Angela Bassett as the Queen Mother Ramonda, Forest Whitaker as spiritual leader Zuri, Danai Girira as General Okoye, Letitia Wright as the the Q-like inventor Shuri, Lupita Nyong’o as Nakia the spy and former lover of T’Challa, Wintson Duke as tribal leader M’Baku (who has one of the funniest lines in the movie), and Daniel Kaluuya as border protector W’Kabi. The movie will likely receive, at the very least, Oscar nominations for its colorful production design by Hannah Bleacher and costumes by Ruth Carter.

Black Panther was captured at 3.4K resolution with Arri Alexa XT Plus cameras and completed as a 4K digital intermediate with Dolby Vision high dynamic range grading. Disney’s 2160p transfer on this 4K UHD Blu-ray release preserves the film’s theatrical aspect ratio of 2.39:1, and has been processed with both Dolby Vision and HDR10 high dynamic range. I viewed the disc on equipment only capable of HDR10. Colors are natural and often pop with a much wider range of hues than found on the included 1080p Blu-ray, particularly in the setting skylines and costumes. Fine detail is exceptional, with fabric textures so realistic you can almost feel them. Where this transfer really puts the Blu-ray to shame is in contrast, with blacks so deep that you can still make out the textures in Black Panther’s uniform during the early rescue sequence in Nigeria, while the same scene on the Blu-ray is much brighter and milky grey.

As with the last few 4k UHD Blu-ray releases from Disney, Black Panther contains both a Dolby Atmos 7.1.4 track (which is Dolby TrueHD 7.1 compatible) and a redundant Dolby Digital Plus 7.1 track. And once again, as with Thor: Ragnarok and Star Wars: The Last Jedi, the Atmos track sounds as if it is the same mix used theatrically and has not been optimized for home theater use. This means it excels at very high volumes, but can sound a bit flat or underwhelming at lower volumes, resulting in anemic LFE and adequate use of surrounds and heights. The track simply rocks at levels closer to reference. The redundant Dolby Digital Plus 7.1 track, though, suffers from sounding somewhat flat, possibly from its lossy bitrate of 1.0 Mbps.

All of the Special Features can be found on the included Blu-ray edition of the movie.M

Featurettes (1080p; 24:55): A fairly by-the-numbers look at the making of the movie and how it fits within the MCU, broken down into four parts; Crowning of a New King, The Hidden Kingdom Revealed, The Warriors Within, and Wakanda Revealed: Exploring the Technology.

Deleted Scenes (1080p; 6:53): Four scenes from the cutting room floor; UN Meet and Greet, Okoye and W’Kabi Discuss the Future of Wakanda, T’Challa Remembers His Father, and Voices from the Past.

From Page to Screen: A Roundtable Discussion (1080p; 20:27): One of the true highlights on this disc, Christopher Priest, Don McGregor, and Ta-Nehisi Coates (writers of the Black Panther comics), Nate Moore (Executive Producer), Joe Robert Cole (screenwriter), and Ryan Coogler (director) discuss Black Panther as a comic book character and the eventual success of the film.

Marvel Studios: The First Ten Years – Connecting the Universe (1080p; 8:39): A continuation of a series that began on Thor: Ragnarok on the history of the MCU.

Exclusive Sneak Peek at “Ant-Man and the Wasp” (1080p; 2:26): A very brief behind-the-scenes look at the upcoming Ant-Man sequel.

Audio Commentary with director Ryan Coogler and Production Designer Hannah Beachler: The two discuss the making of the film at great length in this very informative commentary track.

Which service did you redeem through?

Robert Crawford said:
Which service did you redeem through?
Click to expand...

Thank you as that will be where I redeem my code. By the way, great review.

I have not been much interested in super hero movies lately, although I've seen a few, but I thought "Black Panther" was the most interesting of all that I have seen. The operatic plot is told with fascinating characterizations moving the story forward in stunning ways. A beautiful cast and outstanding scenery amazed at every turn. It's also cunningly apropos to our times, and funny as well. We can't wait to see the sequel. We loved this movie. Forward!!!!!

We just tried to watch this movie with the commentary by director Ryan Coogler and it prompted me to set up a new thread called “worst commentaries of all time”. I am posting my comment here because I couldn’t figure out how to do it!

I found his manner of speaking intensely annoying. He was very very hard to understand and his constant repetition of “you know what I’m Sayin’” drove my wife and I to stop the disc half way through. I have never had to do this before.

Ragnarock and Infinity War were better than this movie, as well as the first Guardians. I could say more but won't, middle of the road Marvel, which is not a bad thing, it's just not all that.

gadgtfreek said:
Ragnarock and Infinity War were better than this movie, as well as the first Guardians. I could say more but won't, middle of the road Marvel, which is not a bad thing, it's just not all that.
Click to expand...

To each his own.

Sure, so not sure why you had to quote me to tell me my opinion is good to go for me. And to be honest, it is not like I'm a minority in my opinion, we all know the whys on why this movie did so well, and it wasn't because it was the best Marvell movie ever.

Groundbreaking for many reasons? Sure. That does not equal the best movie, but everyone loves a feel-good moment for society...

But sure, piss on my head and tell me it's raining instead!
You must log in or register to reply here. 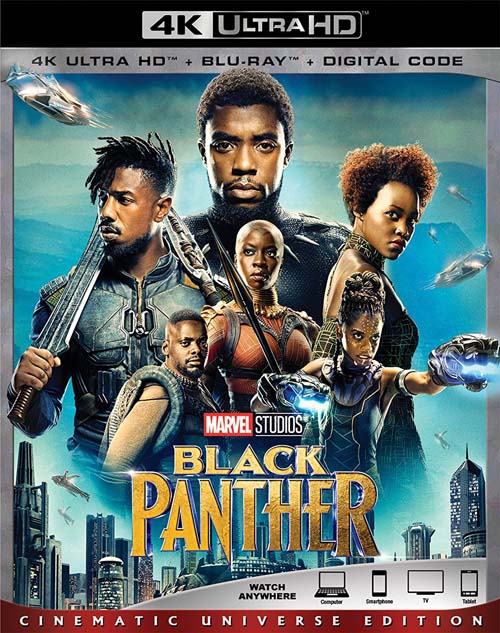