Like a Timex, he takes a licking and keeps on ticking… 4.5 Stars

When we last left John Wick (Keanu Reeves), he had committed a forbidden act by killing a fellow assassin within the confines of The Continental Hotel (a safe haven for The High Table) in New York, and been declared “Excommunicado” by the hotel’s manager, Winston (Ian McShane), giving John only one hour to get his affairs in order before a $14 million bounty goes into effect. John Wick: Chapter 3 – Parabellum picks up just moments after those vents take place, with John running through the streets of New York, desperately trying to find a way out. His journey takes him to a ballet hall where he meets with The Director (Angelica Houston), who grudgingly agrees to settle a debt and provide John safe passage to Casablanca, Morocco, where he meets up with an old friend and now manager of The Continental Morocco, Sofia (Halle Berry), who also reluctantly, agrees to take John to her boss, Berrada (Jerome Flynn) in hopes of arranging a discussion with The Elder (Saïd Taghmaoui) who oversees The High Table.

Meanwhile, an Adjudicator (Asia Kate Dillon) has contacted both Winston and the Bowery King (Laurence Fishburne) that they have seven days to get their affairs in order and step aside, under The High Table’s orders, for assisting John Wick. She has also hired a team of assassins lead by master sushi chef Zero (Mark Dacasos) to hunt down and kill John Wick and anyone who assists him. Of course, while all of this is going on, John finds himself under constant attack by hit men and other assassins who want to collect on the now $15 million bounty.

I have enjoyed all three chapters thus far, with Chapter 3 being about on even keel as the previous entry. As well-choreographed and graphic the fight sequences are, some feel like they go on a bit too long. There are some clever gags (the horse had me on the floor), and the motorcycle chase is cleverly executed. Reeves still pretty much owns the character of John Wick, and the few returning characters also put in solid performances. Mark Dacasos is quite hilarious as the blade-wielding sushi assassin Zero, who has a respect and almost fanboy obsession for John Wick.

It seems like UHD and John Wick go hand in hand, as if one was made for the other and vice versa. IMDB claims that John Wick: Chapter 3 – Parabellum was captured at 3.2k resolution on Arri Alexa SXT and Mini camera, then completed as a 2K digital intermediate with Dolby Vision high dynamic range for its premium theatrical engagements. Lionsgate’s 2160p HEVC-encoded transfer includes both Dolby Vision and HDR10 high dynamic range, and retains the film’s theatrical aspect ratio of 2.40:1. It really doesn’t matter if this was an upconversion or not, because Chapter 3, like its predecessors, is a sight to behold on 4k UHD Blu-ray. The level of detail is phenomenal, from the scars and beard stubble on the main character to fabric textures and street traffic from extreme overhead long shots. Black levels are extraordinary, very inky with a great deal of retained shadow detail. Colors, which these films are very stylized in, are vibrant and robust, with added gradations that are not necessarily visible in the Blu-ray presentation. There is also no hint of any compression artifacts whatsoever. If it were not for the extremely graphic violence, this would make an excellent demo disc for the format. It should be noted that this disc was reviewed on equipment capable of HDR10 only.

The Dolby Atmos track will not disappoint, either. LFE is strong and bold, perhaps a bit too much, as the opening Lionsgate fanfare (in the film, not the disc) sounded like it was putting some strain on my subwoofer, which resolved itself after turning the sub down a few notches. This is a truly immersive track, with rain and the occasional knife or bullet coming at you from above and all around you. Dialogue is clear and understandable throughout.

All of the special features can be found on either the UHD or Blu-ray disc, but some are a bit repetitive by including some of the same interview segments.

House of Transparency (1080p; 7:10): A look at the production design, specifically the all glass display room.

John Wick: Chapter 3 – Parabellum continues the saga of the man who can kill with a pencil (although he does not do so in this chapter). The UHD 4K Blu-ray release from Lionsgate is demo-worthy in both video and audio.

Thanks for your fine review. I will watch this in my downstairs main HT as I don't want to disturb my next door condo neighbors.
Reactions: John Dirk

Thanks for the review. Hope to receive and watch tomorrow. 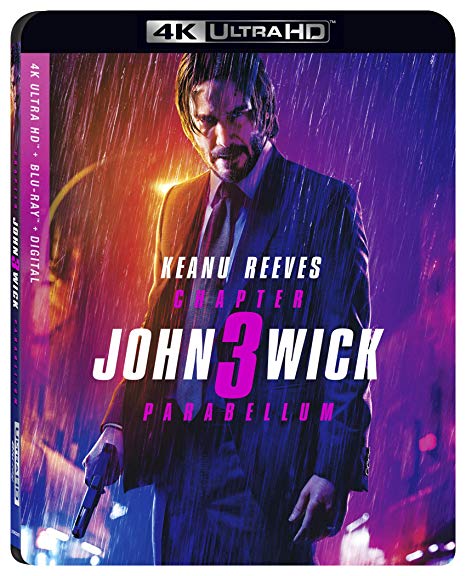