Forum List What's new Dark Style Change width
Log in Register
What's new Search
Menu
Log in
Register
Navigation
Install the app
More options
Dark Style
Close Menu
Posted on September 13, 2019 by Todd Erwin
You are using an out of date browser. It may not display this or other websites correctly.
You should upgrade or use an alternative browser.
Performance-driven thriller 4 Stars

Director Tate Taylor reunites with his co-star from The Help, Octavia Spencer, in the psychological thriller Ma, in which the actress truly elevates the material.

Maggie (Diana Silvers) and her now-single mother Erica (Juliette Lewis) have moved from San Diego to Erica’s hometown in Ohio in the middle of the school year. Maggie quickly makes friends with Haley (McKaley Miller), who invites Maggie to drive around town drinking in Andy’s (Corey Fogelmanis) father’s work van. Desperate to score some booze, they have Maggie hang out by the front door to the local liquor store, asking strangers if they would help her out. After several rejections, a brightly smiled woman, Sue Ann (Octavia Spencer) wanders by walking a dog and after some hesitation, agrees to purchase items for the kids, and then invites them over to her house, offering them the basement on the condition that they surrender the keys to their car and remain in the basement. This continues for several weeks, with Sue Ann becoming more and more involved with the kids as they party. Being teenagers, they soon tire of Ma’s hospitality, partying with her less often, until Sue Ann begins stalking them at school and face-timing with them on their cell phones, until the kids begin showing up again. But things aren’t quite right. Maggie passes out at the party one evening, only to find herself in her own bed the next morning without her mother’s earrings. As it turns out, Sue Ann is a damaged soul, who was bullied in high school by the parents of most of the kids that have been hanging out in her basement. Could this all be a plot of revenge by Sue Ann on her former classmates?

Ma could have easily been just another slasher film if it were not for the performance by Octavia Spencer. She brings a lot of empathy to Sue Ann as well as an underlying sadness, a woman trying to regain the teenage years she lost after a horrendous bullying incident involving the parents of those kids. It is that sadness and empathy that makes Sue Ann, known to the kids as “Ma,” so scary, and her ability to turn it on and off like a light switch, sweet and kind one moment, and down right scary the next. Juliette Lewis and Luke Evans, in supporting roles as two of the parents, are also very good in what little screen time they have.

Another quality effort from Universal, Ma arrives on Blu-ray in an AVC-encoded 1080p transfer that retains the film’s theatrical aspect ratio of 2.39:1. Details are quite good, as are black levels and contrast. Colors are somewhat muted, obviously an artistic choice to show a mid-west rural town in late fall/early winter.

The DTS-HD MA 5.1 track is pretty solid, providing nice fidelity and an ambient surround presence throughout with a few discrete effects thrown in here and there. This was a low-budget production ($5 million estimated), and overall this is a fairly front-heavy mix, with dialogue driving the film.

There’s not a lot here and what is here does not have a whole lot of meat on it.

Creating Sue Ann (1080p; 2:50): Octavia Spencer discusses her character and how she got involved in the project, and the rest of the cast and crew talk about working with her.

Party at Ma’s (1080p; 3:53): The cast and crew discuss working with director Tate Taylor, working with each other, etc.

DVD Copy: The movie in 480p with Dolby Digital 5.1 sound, plus all of the Special Features listed above.

Ma is a movie that showcases the acting range of Octavia Spencer as a wounded middle-aged woman trying to recapture the teenage years that were taken from her. 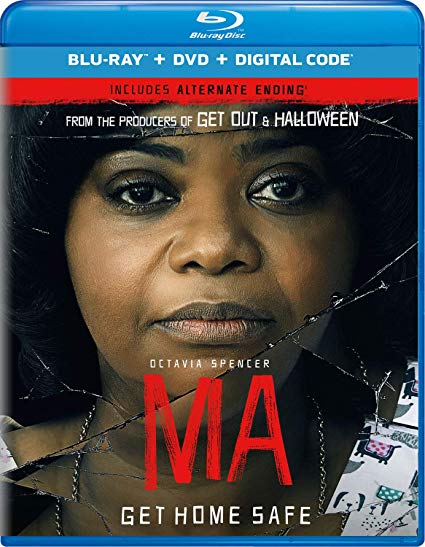