An excellent value with solid performance, only held back by a frustrating binding post design 4 Stars

The Focal Sib Evo Dolby Atmos 5.1.2 system is a ‘Home Theater in a box’ type of setup, boasting two Sib Evo Dolby Atmos loudspeakers with upward facing drivers that provide the .2 Atmos configuration. Three surround satellite speakers provide 360° coverage and adds a center channel that can be modified to sit horizontally. A 200-watt Cub Evo subwoofer lends oomph to the system, providing clear and tight bass for a small package.

What’s in the box?

What I used to review:

My biggest gripe…heck, my only real gripe with these speakers, is the setup. Those damned speaker ports! Trying to get the speaker wire to stay in the ports was a nightmare. Granted, I was running a thicker gauge than what was meant for the Sib Evo speakers, but the binding posts are poorly engineered nonetheless. The speakers have a push button configuration which, when the button is pushed, opens the ports on the speaker to allow you to insert the speaker wire. Unfortunately, both ports are opened by the same button, and if one of your cables doesn’t fit exactly and is perhaps holding the port just a little more open than the other cable, then your other cable will tend to slip out. This could easily be fixed by having the ports open independently from each other. Each of the speakers comes with a rubber foot, which allows for easy installation and positioning. Installing the surrounds was a breeze, and one of the surrounds can double as a center channel. It even allows for turning the center channel horizontally and setting it on the rubber foot makes it easy to adjust the angle of the speaker. 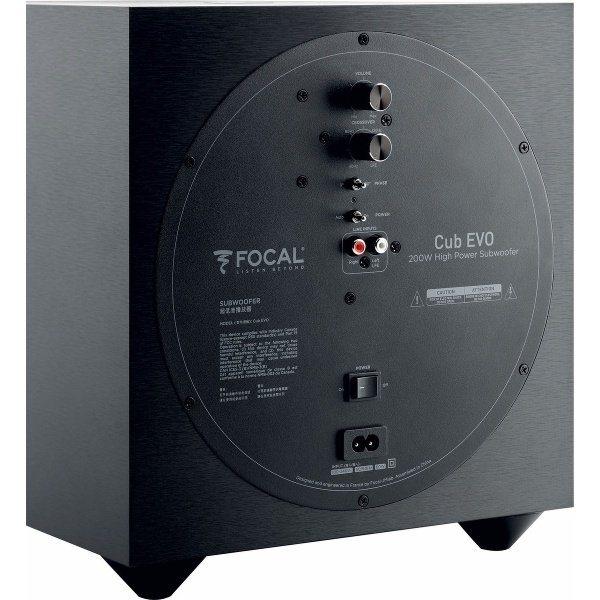 Priced at a very reasonable $1300, you’re getting the sound quality of a higher priced system, in addition to supporting a Dolby Atmos 5.1.2 configuration. You could easily pay twice that amount for a similar experience. The sub was surprisingly punchy and tight, the surrounds were all responsive and put out great sound, and the front facing loudspeakers really provide a rich, powerful listening experience. As soon as you get passed the installation headache, this system is easily worth much more than the price you’re paying. Hopefully Focal will address the binding post issues in further iterations of these speakers.

Great sound quality, punchy yet not overpowering bass, Dolby Atmos high speaker configuration, and a very reasonable price tag makes this system a definite contender with higher priced setups. Fantastic for someone looking for a ‘Home theater in a box’ type of setup / all in one package. Excellent bang for your buck.