Mark Twain’s classic of American literature had been filmed twice before, but David O. Selznick’s take on The Adventures of Tom Sawyer was the first shot in Technicolor and represents, probably, the best adaptation of the famed work. Filled with the moments familiar to readers and a sense of nostalgia of the carefree days of youth, the movie represents fine storytelling and pure entertainment at its finest during the Golden Age of Hollywood. Kino has picked up the film for release in it’s Studio Classics line.

Tom Sawyer (Tommy Kelly) isn’t a bad boy, he’s just a mischievous one in his small town of Hannibal, Missouri. When he’s not giving his Aunt Polly (May Robson) grief or trying to woo the new girl Becky Thatcher (Ann Gillis), he’s out looking for shenanigans, like getting others to do his work, tormenting his half-brother Sid (David Holt), or hanging around with Huckleberry Finn (Jackie Moran). One night, however, Tom and Huck witness a murder at the old graveyard and swear into an oath of silence. But it soon becomes clear that when Muff Potter (Walter Brennan) is charge with the crime, Tom may have to break his vow in order to save him. However, doing so puts him in the sights of the real murderer.

In bringing Tom Sawyer to the screen, producer David O. Selznick proved his immaculate gift for presenting great stories with a high quality production that vividly brought the characters to life; his propensity for hands-on management is also evident as well – Norman Taurog was the credited director, but George Cukor, William A. Wellman, and H.C. Potter were all attached to the project at one point or another during production. Even with the numerous changes, the final product doesn’t really bare any scars from that, with Lyle Wheeler’s Oscar-nominated production design capturing the essence of the lazy Mississippi River life and country beautifully and James Wong Howe’s subdued yet stunning color camerawork also generating the feel of Summer in the South as well (because of disputes with the Technicolor company, it would be another decade before Howe shot another production in color). The climatic cave sequence, designed by William Cameron Menzies, is absolutely stunning in its conception and execution, eventually giving Menzies the job on Gone with the Wind.

The same Selznick style of quality extends to the choice of casting to fill the roles; Tommy Kelly, the son of a Bronx fireman plucked from obscurity for the part, generates the right mixture of mischief and sentiment needed for the title role – sadly, stardom didn’t come for him and only had a few more parts before leaving the movie industry altogether. Ann Gillis, already a veteran child actress with a dozen films completed at the time of the movie’s release, makes for an adorable Becky Thatcher; she’s better known to Disney aficionados as the voice of the adult Faline in Bambi (1942). May Robson probably has one of the two standout performances in the cast as a definitive Aunt Polly, annoyed by Tom’s antics but can’t help but love him all the same. Other notable names in the cast are Walter Brennan as the framed Muff Potter, Victor Jory as the murderous Injun Joe (the other standout performance), Olin Howland as schoolteacher Mr. Dobbins, Donald Meek as the Sunday school superintendent, Jackie Moran as the child of nature Huckleberry Finn, and the Wicked Witch of the West herself, Margaret Hamilton, as the mother of one of Tom’s friends

The original 1:33:1 aspect ration is preserved in the film’s HD transfer of the original 91 minute version. For the most part, the color palette is vivid, even in its subdued intentions, with some instances of registry error, probably coming from the state of the elements used. Grain structure is organic, with minor instances of dirt, dust, scratches and speckling present. Safe to say, this is probably the best the film has looked on home video.

The film’s mono soundtrack is preserved on the DTS-HD MA 2.0 track. Dialogue and sound effects are strong and clear, with minimal to no instances of crackling, distortion, popping or hissing. The music – with cues composed by an uncredited Max Steiner along with utilized stock music from 12 different composers like David Buttolph, Alfred Newman, and Herbert Stothart, to name a few – has strong fidelity for a film made over 80 years ago, making it a nice listening experience.

Re-release version (77 minutes) – Released in 1954, this version trims 14 minutes from the original version, mostly expository scenes. Also notable is the changing of credits; for instance, instead of “A Selznick International Picture” at the beginning, we see “The Selznick Studio” and the byline crediting United Artists as the distributor is also omitted from the opening credits.

Unfortunately, no special features or commentaries were recorded about the production itself, making this a huge missed opportunity.

With The Adventures of Tom Sawyer, David O. Selznick added to his portfolio of great productions that utilized great stories. While lacking in special features, Kino has done a nice job in including both the original release as well as the recut reissue version that has been available on home video for so many years. Pick up a copy, grab a lemonade, and kick back and enjoy this Golden Age classic. 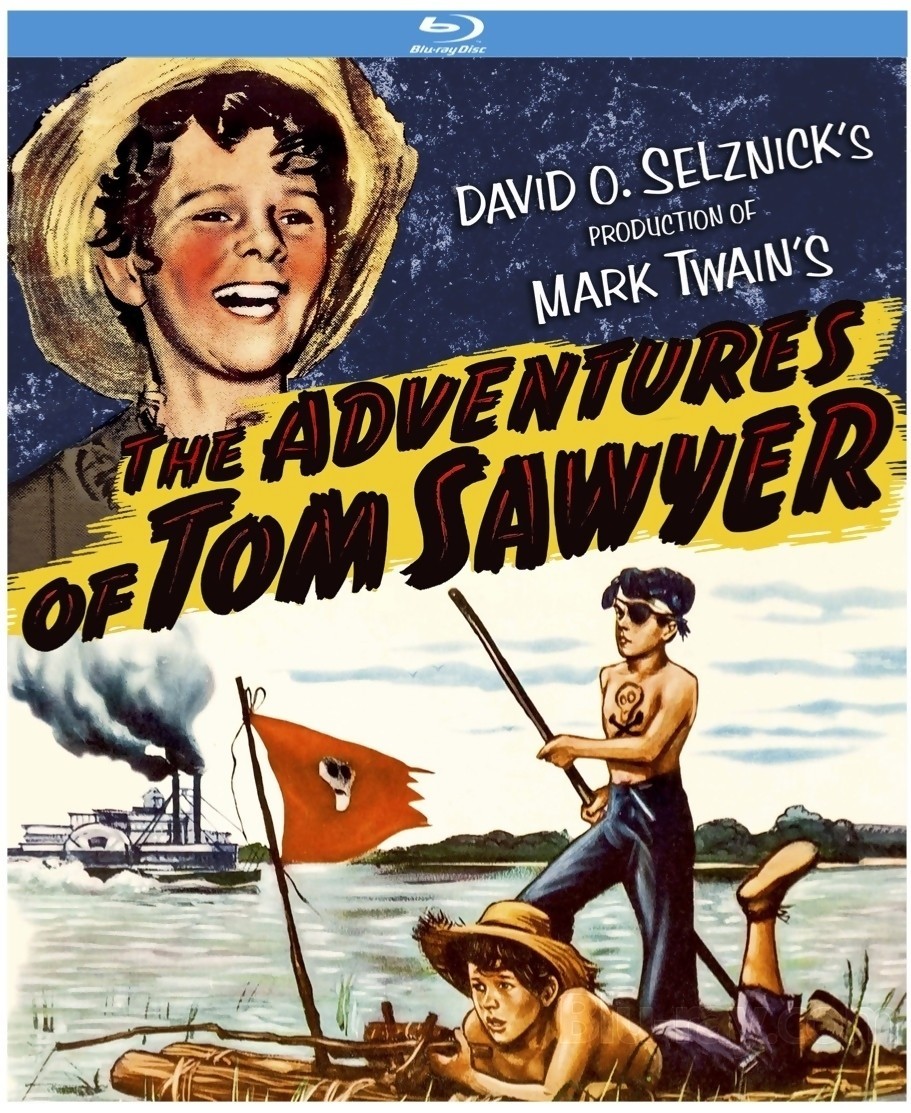