Forum List What's new Dark Style Change width
Log in Register
What's new Search
Menu
Log in
Register
Navigation
Install the app
More options
Dark Style
Close Menu
Posted on August 2, 2018 by Todd Erwin
You are using an out of date browser. It may not display this or other websites correctly.
You should upgrade or use an alternative browser.
Exciting conclusion to the series 4 Stars

The fourth and final season of Star Wars Rebels arrives on Blu-ray with some decent special features, including audio commentaries and featurettes with some actual meat on them for a change.

I consider myself a fan of the Star Wars franchise, but with few exceptions I never really enjoyed any of the animated series, and thus never watched Star Wars Rebels. I find that to be a shame here, since that has severely handicapped my review of this fourth and final season of the popular Disney XD series, which takes place a few years before Rogue One.

As the season opens, the ragtag band of rebels find themselves on Mandalore, attempting to rescue Sabine’s (Tiya Sircar) father Alrich (Cary-Hiroyuki Tagawa) from the Empire, only to discover that a weapon Sabine created when she was previously with the Empire is now being used against her home world. They then head to Yavin 4, where they encounter a hologram communication from Saw Gerrera (Forest Whitaker, reprising his role from Rogue One), convincing them to help him discover another secret weapon the Empire is working on. This ultimately sends them on a search for a redesigned TIE Defender the Empire is constructing, and after many more adventures, leads the team to a showdown with the Empire on Lothal.

It took me a few episodes to get used to the three-dimensional CG animation style, its often exaggerated body movements being the most distracting. The animation quality is above average for a television series, never quite approaching the level of Pixar or Disney feature animation or even DreamWorks Trollhunters series, but definitely light years above the dreadful Tarzan and Jane series on Netflix. The voice talent is also top rate, including Taylor Gray as Ezra Bridger, Vanessa Marshall as Hera Syndulla, Freddie Prinze, Jr. as Kanan Jarrus, and Steven Blum as Garazeb “Zeb” Orrelios.

The season set contains all 16 episodes spread out over two Blu-ray discs:

Matt Hough said it best when he reviewed previous seasons of the series on Blu-ray:

The transfers are framed at 1.78:1 and are presented in 1080p using the AVC codec. Sharpness is outstanding throughout, and color depth and reproduction is beautiful and consistent with no blooming. The character animation will remind you of the in between examples one often sees on CG animated features as the movies are readying themselves for the final animation passes, but the look is consistent and quickly becomes the status quo for the series, and that doesn’t negate any of the really finely detailed background art or action sequences which get the more realistic CG treatment. The black levels of space are inky black and quite impressive. There is occasional evidence of banding in lighter colored backgrounds, but this anomaly occurs quite infrequently.

I was rather disappointed with the overall audio mix on these episodes. It is not terrible, by any means, but found them to be a bit more front-heavy than what I’ve been used to with anything in the Star Wars universe, but that may have more to do with the use of lossy Dolby Digital 5.1 tracks, even though they have been encoded at 640 kbps. Dialogue is clear and understandable throughout, and the soundstage is fairly wide with occasional discrete surround effects. The score by Kevin Kiner, utilizing themes by John Williams, fills out the listening environment nicely. LFE is acceptable, but could definitely be stronger.

Audio Commentaries by Series Executive Producer Dave Filoni: Filoni discusses his involvement with the series and often goes into much detail on how everything ties into the Star Wars canon. Commentry tracks are available on the following six episodes: Heroes of Mandalore, Part I, Heroes of Mandalore, Part II, Jedi Night, Wolves and a Door, A World Between Worlds, and Family Reunion and Farewell.

Star Wars Rebels comes to an exciting and fulfilling conclusion in this fourth and final season, and this 2-disc Blu-ray set includes some interesting behind the scenes featurettes.

I thought they did an excellent job at wrapping up the series with this season. Thanks for the review!

Todd, thank you for the informative review!

This was a terrific season and introduced some new elements to the Star Wars cannon that I wouldn’t be surprised to see pop-up in Episode 9.

Don't listen to the commentaries until you've seen all the episodes because Dave Filoni talks about major plot points throughout the tracks.
You must log in or register to reply here. 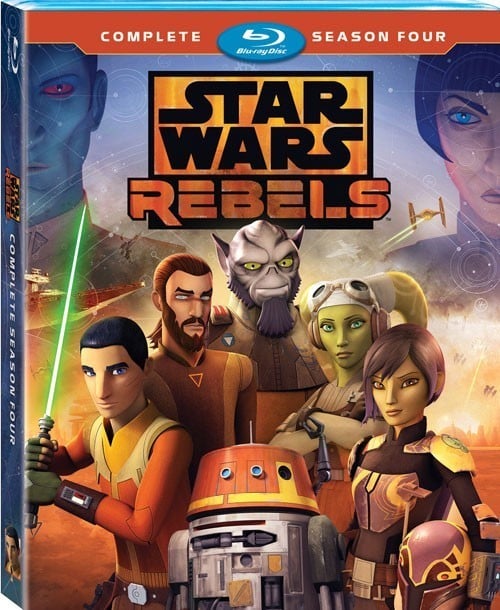