As a tie-in to help promote John Wick: Chapter 2, due in theaters on February 10, Lionsgate has released the first film in the franchise, John Wick, on 4K UHD Blu-ray in a stunning transfer that will please fans who have upgraded their home theaters.

For the uninitiated, as John Wick begins to unfold, the titluar character (played by Keanu Reeves) appears to be an everyman grieving the loss of his wife, until his wife leaves him with a puppy to help keep him company. It proves to be good therapy for John, who begins to move on in life. That is, until Iosef Tarasov (Alfie Allen from Game of Thrones) tries to purchase John’s classic Mustang while gassing up at a local filling station. John tells him the car is not for sale, so Iosef and his gang of goons break into John’s house, kills the puppy, beat John to within an inch of his life, and steal his car. It’s not until Iosef tries to unload the car at Aurelio’s (John Leguizamo) chop shop that we, the audience, begin to find out that John Wick is not the type of guy to mess around with. Aurelio refuses to take the Mustang, punching Iosef and telling him he’s in a mess of trouble. Iosef’s father, Russian mob boss Viggo (Michael Nyqvist), calls Aurelio, asking him why he struck his son. When Aurelio tells him it was because Iosef stole John Wick’s car and killed his dog, Viggo’s only response is “Oh.” That pretty much sets up the reign of graphic novel style violence that follows, as John Wick, as it turns out, is a former assassin for hire who had retired shortly before marrying his late wife. Knowing the hell that is about to break loose upon his son and crime syndicate by John, Viggo puts out a bounty on John Wick, enlisting the aid of fellow assassins Ms. Perkins (Adrianne Palicki) and Marcus (Willem Dafoe). John proves that no one sets him off.

John Wick is one of a few signature roles for Keanu Reeves, a character that he has embodied and made his own almost effortlessly, much like his roles in Bill and Ted’s Excellent Adventure, Speed, and The Matrix. He’s a man of few words, but even though he’s essentially an anti-hero, it is his loss and ultimate revenge as well as the evilness of the Tarasov’s that allow the audience to empathize and root for John Wick to succeed in his task. Michael Nyqvist is quite effective as the Russian mob boss and protective father. Alfie Allen is at his smarmy best as Iosef, a punk kid you love to hate and can’t wait for him to get his comeuppance. Willem Dafoe is excellent as Marcus, a longtime friend of John’s who you’re never quite sure which side he is on when he accepts the bounty on John’s head. Adrianne Palicki got her feet wet for action sequences as Ms. Perkins, preparing her for her short-term role on Marvel’s Agents of S.H.I.E.L.D. Directors Chad Stahelski and David Leitch (who was uncredited) keep the action flowing at a brisk pace, and with the help of cinematographer Jonathan Sela, frame much of the movie as a graphic novel, adding an extra layer of grittiness. John Wick is an extremely violent and sometimes bloody movie, and may not be for everyone, but it is one of the best action films in recent years.

John Wick was captured in 2.8K on Arri Alexa M and XT cameras, and completed as a 4K digital intermediate. The result is a transfer that has a slight increase in fine detail over the Blu-ray, but where the UHD disc really shines is in contrast and color tones. This is a relatively dark film, and the wider range of contrast allows for improved shadow detail, especially in both the nightclub scenes and the late night scenes in John’s house during the first act. The film also used a lot of color grading for various locations, and on this disc there is a wider range of color gradients than what the Blu-ray was capable of reproducing. This is a definite reference quality transfer.

John Wick on UHD utilizes the same Dolby Atmos track found on the original Blu-ray release, which is backwards compatible with its Dolby TrueHD 7.1 core. Played back in a traditional 5.1 speaker configuration with additional front heights and Pro-Logic IIz enabled, the track comes alive with gunshots and crashes coming from every available speaker, quite often panning from one to another. Bass response is also exceptional with lots of LFE activity for your subwoofer. Dialogue is directed mostly to the center channel, with some occasional panning where necessary, and yet never gets lost in the mix.

Lionsgate excellent track record of including all of the special features on the UHD disc continues with John Wick, although I was a bit surprised that a trailer for John Wick: Chapter 2 was not included.

Audio Commentary by Filmmakers Chad Stehelski and David Leitch: This is a great commentary track with the co-directors, who discuss working again with Keanu (Chad was his stunt double on The Matrix films), the color palette choices, the set design, stunt prep, and working with a relatively small budget (reportedly $20 million).

Destiny of a Collective (1080p; 6:19): Directors Chad Stehelski and David Leitch and screenwriter Derek Kolstad discuss how they came to make their first film after working for so many years as stunt men.

Blu-ray Copy: The movie in 1080p and Dolby Atmos plus special features.

John Wick may not be for everyone, as it rightfully deserved its very hard R rating, but it is another signature role for star Keanu Reeves. The video and audio are reference quality, and it’s nice to see a studio like Lionsgate continue to include the special features whenever it can on the UHD version.

Cant wait to watch this in UHD!!!
Reactions: Todd Erwin

I was expecting nothing when I watched this on Blu-ray and was pleasantly surprised. Upgrading to UHD for $15 makes this a no brainer, just ordered it!
Reactions: Todd Erwin

Yep, I have this UHD release ordered too!
Reactions: Todd Erwin

Thanks for the review, Todd. I was on the fence with this one as a blind purchase, but I think I will keep my pre-order. The price was right. I do not have a UHD player yet, but plan on getting one sometime in 2017.
Reactions: SAhmed

Adam Gregorich said:
I was expecting nothing when I watched this on Blu-ray and was pleasantly surprised. Upgrading to UHD for $15 makes this a no brainer, just ordered it!
Click to expand... 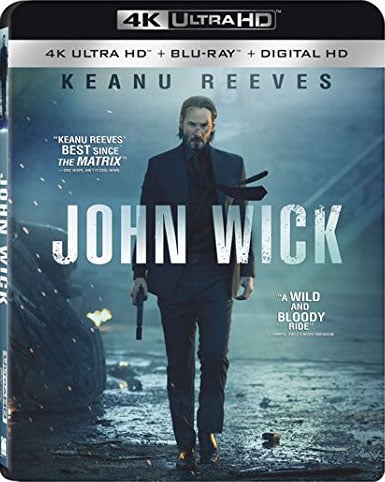