Yankee Doodle Dandy is one of the finest musical biopics ever to come out of Hollywood, and it is now available in a stunningly beautiful Blu-ray courtesy of the Warner Archive. 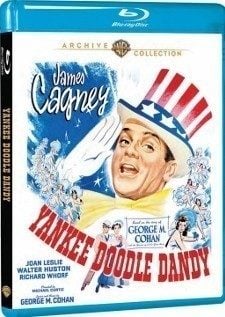 My mother thanks you, my father thanks you, my sister thanks you, and I thank you. - George M. CohanNearly sixty years ago, when I was in first grade, my classmate Tommy Harrison and I were told that we had been picked to sing a duet in front of the entire student body on St. Patrick's Day. The song which was chosen for us was "Harrigan" by George M. Cohan. The part which Tommy and I sang goes like this:H - A - double R - I - G - A - N spells HarriganProud of all the Irish blood that's in me; Divil a man can say a word agin me.H - A - double R - I - G - A - N, you see,Is a name that a shame never has been connected with, Harrigan, That's me! At the time I had no idea who George M. Cohan was. That changed a few years later when I saw Yankee Doodle Dandy on "Million Dollar Movie," a program on Channel 9 in New York which aired the same film several times a day for an entire week. I was enthralled by it, and for the rest of my life it has remained one of my favorite movies.George M. Cohan (James Cagney) was in fact a "Yankee Doodle Dandy," supposedly born on the Fourth of July (although records show that his mother actually gave birth to him on July 3, 1878 in Providence, Rhode Island). The film opens toward the end of Cohan's life. After years in retirement he has returned to Broadway to play President Franklin D. Roosevelt in "I'd Rather Be Right," a musical from a book by Moss Hart and George S. Kaufman, with lyrics by Lorenz Hart and music by Richard Rodgers. George is concerned about possible blowback because of his audacity in playing a sitting President on stage. His concern is heightened when he is summoned to the White House to meet with the President. As it turns out, Mr. Roosevelt has nothing but praise for George, and the film plays out in flashback as George tells the President his life story.George was born into a show business family. His parents, Jerry Cohan (Walter Huston) and Nellie Cohan (Rosemary DeCamp) are versatile vaudevillians who sing, dance, and perform both comedies and drama. George begins to appear onstage with his parents at a young age, and along with his sister Josie (Jeanne Cagney) the act is known as The Four Cohans. George learns to play the violin and is an accomplished dancer, but he also becomes brash and arrogant. As George gets older his undesirable personality traits cause problems for the family because producers no longer want to deal with him.Things come to a head in Buffalo, N.Y. where George (in a very funny scene) meets Mary (Joan Leslie), a young aspiring singer and dancer who is just graduating high school. The Cohans have been booked for a vaudeville show in New York City, and George agrees to give Mary a place in the act. However, when George gives Mary one his own compositions to sing without the approval of the show's producer, the entire family is fired. George, who has been composing his own music, encourages his family to go back on the road while he and Mary try to interest New York producers in financing a show he has written. After numerous rejections he gets a break when he meets Sam Harris (Richard Whorf), and together they persuade Mr. Schwab (S.Z. Sakall) to finance "Little Johnny Jones," a musical about an American jockey in England. The show is a smash hit and introduces two of Cohan's most famous songs, "Give My Regards to Broadway" and "The Yankee Doodle Boy" (the latter song is better known as "Yankee Doodle Dandy").George quickly becomes Broadway's hottest star and impresario. He and Harris are able to persuade Faye Templeton (Irene Manning), who was then Broadway's most famous female singer, to headline George's latest production, "45 Minutes to Broadway." The show introduces George's newest hit song, "Mary Is a Grand Old Name." Subsequent famous songs written by George include "You're a Grand Old Flag" and the World War I anthem "Over There."The centerpiece of this elaborate production is a dazzling and exceptionally energetic performance by James Cagney, who brings George M. Cohan to life as no other actor could have done. Viewers who know Cagney only from his dramatic performances will be astonished by his athletic dancing. The scene of him tap dancing on the stairs of the White House is iconic and unforgettable. His portrayal of Cohan won him a well-deserved Academy Award for Best Actor and earned praise from Cohan himself, who died approximately five months after the film's premiere. Cagney is ably supported by Walter Huston, who garnered an Academy Award nomination for Best Supporting Actor. Joan Leslie, who was less than two months shy of her 17th birthday when filming began, is lovely as Mary, and Cagney's younger sister Jeanne is excellent as Josie Cohan. Yankee Doodle Dandy also received an Academy Award nomination for Best Picture, and Michael Curtiz likewise was nominated for Best Director.Yankee Doodle Dandy is unabashedly sentimental and patriotic, making it the perfect film to be released during the darkest days of World War II. One might assume that such a film would be hopelessly outdated today, but 72 years after its theatrical release this extraordinary new Blu-ray makes Yankee Doodle Dandy seem as fresh as the day it opened.

The 1.37:1 1080p black & white image is encoded with the AVC codec and is absolutely flawless. The picture is sharp throughout, there is no evidence of dirt or damage, blacks are solid, whites are perfect, contrast is strong, and film grain is intact, all combining to provide a splendid film-like experience. The outstanding cinematography by James Wong Howe has never looked better.For further details I recommend that you read A few words about...™ Yankee Doodle Dandy -- in Blu-ray by our resident expert, Robert A. Harris.

The DTS HD-MA 2.0 audio faithfully reproduces the original mono soundtrack, and it is beyond reproach. I rarely give my highest audio rating to a mono film, but the musical numbers sound so good here that I will make an exception for Yankee Doodle Dandy. Every word of dialogue is clear and understandable, there is not a hint of distortion in the music, and overall the audio is devoid of hiss, noise, or any other age-related issues.English SDH subtitles are available for viewers who need them.

Warner has ported over most of the extras which appear on the two-disc DVD release from 2003."Warner Night at the Movies, 1942" is introduced by Leonard Maltin and includes the trailer to Casablanca, a newsreel, the amusing Merrie Melodies cartoon Bugs Bunny Get the Boid, and a World War II short subject about the exploits of a decorated Army Air Corps pilot, Captain Hewitt T. Wheless. Happily, Captain Wheless survived the war and retired in 1968 as Assistant Vice Chief of Staff of the Air Force."Let Freedom Sing! The Story of Yankee Doodle Dandy" is a making-of documentary which was produced in 2003. One of the interesting insights is that George M. Cohan had final approval of the film before it could be released. He was given a private screening in the spring of 1942 and saw it again in a theater in New York City shortly before his death. This short includes excerpts from an excellent interview with Joan Leslie, the only principal member of the cast who is still living. This documentary also points out that some of the film's best dialogue was written by brothers Julius J. Epstein and Philip G. Epstein, who received no onscreen credit for their work."John Travolta Remembers Jimmy Cagney" is a five-minute short in which Travolta talks about how he met Cagney when the older man was 80 years old, and they were friends up until the day that Cagney died in 1986. I was intrigued to hear that Travolta, who is six years younger than me and grew up in New Jersey, also saw Yankee Doodle Dandy for the first time on "Million Dollar Movie.""You, John Jones" is a World War II short in which Cagney plays a Civil Defense volunteer who reflects upon the fact that living in the United States has spared he and his family from experiencing the carnage which has been inflicted on other countries throughout the world.Also included is the Looney Tunes cartoon Yankee Doodle Daffy, which features Daffy Duck and Porky Pig."Audio Vault" includes the audio of five musical outtakes and rehearsals, as well as the "Lady Esther Screen Guild Theater Radio Show" version of Yankee Doodle Dandy.The film's theatrical trailer is in fairly good shape, although it pales in comparison to the feature presentation.Finally, the film can be viewed with an informative audio commentary by film historian Rudy Behlmer. He provides an excellent chronology about when and where the various scenes were filmed and he helpfully identifies many of the uncredited actors who appear in the film.

Yankee Doodle Dandy is one of the best Blu-ray releases of 2014 and is highly recommended. Readers who wish to purchase it - and everyone who owns a Blu-ray player should want to own it - can order it at the Warner Archive website.

I was also introduced to YDD on Million Dollar Movie, and although I have no distinct memory of what was broadcast, I'd bet that the film was missing quite a bit of footage to enable it to fit into the proper time slot.

Wow. Looks like Warner has pulled off a real winner here.

...but we knew that's what they would have done all along.

I never saw it on Houston's Million Dollar Movie, but on countless Late Shows. I always thought Joan Leslie should have been a bigger star.

Great review - thanks. Cagney's performance is even more remarkable considering he was past 40 when this was made. He was in terrific shape and it shows during his song/dance numbers. I get winded just watching him do his routines.

Looking forward to watching this when it arrives.

I first saw this on DVD.

This will be one of the Christmas attractions at my place, believe me, thundering through the surround speakers in all its mono glory. I suspect Warners may well have taken care of this already, but I hope Joan Leslie has a copy of this bluray in the post to her -- she was sensational in this movie and we're blessed that she's still around to see this restoration and a new generation of fans for this movie.

Brian McP said:
This will be one of the Christmas attractions at my place, believe me, thundering through the surround speakers in all its mono glory. I suspect Warners may well have taken care of this already, but I hope Joan Leslie has a copy of this bluray in the post to her -- she was sensational in this movie and we're blessed that she's still around to see this restoration and a new generation of fans for this movie.
Click to expand...

What in heaven's name are you talking about?