From Broadway smash to hit film in three years: thus was the trajectory for Lewis Milestone’s filmed version of Charles MacArthur and Ben Hecht’s The Front Page, the first of four movie variations on the famous satirical black comedy. Though His Girl Friday is today considered the best of the four, unquestionably the 1931 original hews most closely to the pace, tone, and intentions of the original play (though impressively opened up for the movies and featuring such astonishing direction that one can hardly believe it was made so early in the sound film period). This new high definition release of the movie by Kino does the best it can with the ancient audio and video materials with which it had to work. 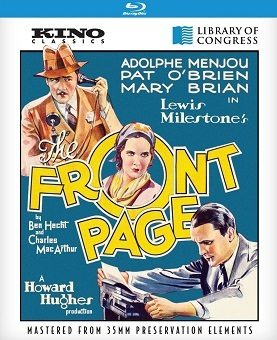 Calculating managing editor Walter Burns (Adolphe Menjou) is outraged to learn that his top reporter Hildy Johnson (Pat O'Brien) is leaving his job to marry lovely Peggy Grant (Mary Brian) and take a job in an advertising agency in New York City, but he’s encouraged that Johnson might stay when sentenced-to-death anarchist Earl Williams (George E. Stone) escapes from inept Sheriff Hartman (Clarence H. Wilson) that lights a fire under Hildy who can’t resist a good story. And when Williams drops into the press room at the Criminal Courts Building and Hildy hides him in a roll-top desk to garner an exclusive story, Burns himself heads down to lend a hand and work on the printer’s ink in Hildy’s blood to keep the interfering Peggy from possibly stealing him away at such a crucial juncture.

The original play by Ben Hecht and Charles MacArthur (often called the most perfectly structured comedy ever written) has been slightly opened up by screenwriters Bartlett Cormack and Charles Lederer, but the essence of the bittersweet satire built into the play is still there from scathing views of indolent newspapermen to incompetent and sometimes corrupt political officials. No one (apart perhaps from the noble streetwalker Molly Malloy enacted by the wonderful Mae Clarke) emerges unscathed from the Earl Williams affair, and the combination of witty, farcical situations along with some heartfelt tributes to man’s occasional nobility (rare but not wholly extinct) keeps the narrative completely involving for both first-timers and return visitors. Sure, the profanity-laced dialogue from the stage play has been completely cleaned up, but there’s enough naughtiness still present to suggest what kind of uncouth humanity we’re dealing with here. However, you’ll be most astonished by the staggering direction of Lewis Milestone who even in this early talkie keeps the camera mobile throughout, sometimes making circular sweeps of the press room, sometimes placing the camera in point-of-view shots that boggle the imagination, and always making sure that there is none of the static cling of a photographed stage play that so many other play adaptations around the same time possessed. (Had Milestone not already won two Oscars in the first three years of the Academy Awards, he most surely would have won for his work here; he was nominated.)

Adolphe Menjou was likewise Oscar-nominated for his Walter Burns, a part expanded on film from its stage counterpart, allowing the often suave Menjou a change-of-pace role as a slimy, cynical, hard-nosed schemer with a heart of brass and demonstrating the ability to handle lengthy takes with all the aplomb of a practiced stage actor. After other actors were considered, Pat O'Brien made his film debut in the role of Hildy Johnson, and while the role is usually performed in a showier, brassier manner, O’Brien gets the job done (even if his typing is about as unconvincing as can be). Mary Brian is acceptably colorless as O’Brien’s love interest (she can’t match Walter Burns’ zest and drive to be number one in Hildy’s heart), but Mae Clark steals the show as the noble down-on-her-heels Molly Malloy. George E. Stone makes for a sweet, innocent pawn of the system as Earl Williams. And what fantastic character actors are around to play the motley crew of reporters crafting features (often fictional) for their city editors over the telephone: Walter Catlett, Matt Moore, Frank McHugh, Freddie Howard, Phil Tead, Gene Strong, and, as the fussy, germ phobic feature writer with a fondness for poetry Bensinger, the one and only Edward Everett Horton. Clarence H. Wilson is unforgettable as the snarling sheriff, and there’s Slim Summerville in a small but key role as a delivery man whose appearance (or lack thereof) can affect the futures of several of the play’s central figures.

The film is framed at 1.33:1 and is presented in 1080p resolution using the AVC codec. While the existing elements Kino had to work from contain a fair share of problems, sharpness and contrast are not among them with the image clearly the best I’ve ever seen for the movie on home video with a better than average grayscale. Yes, there are problems with age-related damage to the print used: a few small scratches and one long one that runs along the right side of the frame for more than a bit, some specks and spots and debris, but the film certainly looks as good or better than others from the same era like Dracula, Morocco, Little Caesar, and Cimarron (which took the Best Picture Oscar from The Front Page in 1931).

The engineers who crafted the PCM 2.0 mono sound mix were working again with ancient audio materials, but they have managed to clean up most of the hiss that would have been present. There are still occasional pops, a little crackle and distortion, and fairly noticeable flutter in the film’s final third, and the direct recording from the era sometimes didn’t always catch what the actors on the move were saying clearly. Still, it’s a decent soundtrack for its era of production.

Audio Commentary: producer and film historian Bret Wood contributes an outstanding commentary on the film offering background information on the original stage production and inside information on its journey to the screen. He also does an excellent job analyzing the movie itself with its performances, direction, and even a few gaffes noticeable as he points them out.

A superb early film version of a celebrated Broadway play, The Front Page despite its age still plays beautifully, and this new high definition encode presents the film in its best-ever light. Highly recommended!

Thanks Matt! Based on this, I'll happily pick this one up.
E

Great,ordered.
You must log in or register to reply here.