(Until this title is announced by the studio, the info still could change.)

I will post cover art as soon as I get it. (Keep an eye on my site's product announcements section for news on upcoming Stargate releases.)

tvshowsondvd.com has posted the artwork and some specs...

:star: Now that SONY is running things, I wonder if they'll use a different style of packaging rather than the SLIPCASE and 5 keepcasess?

If the artwork is accurate than they're continuing the SG1 set in the same format and using some thinner format for Atlantis. I'm all up for that, SG1 takes up more room on my shelves than any other set I own.

Cool! Unlike SG1, I was able to start watching Atlantis from the beginning, so I know what is going on, and have become quite a fan.

So, do we watch S8 of SG-1 first or Atlantis S1? The SG-1 S7 finale seemed like an opening for Atlantis.

The opening two-parter of season 8, then Atlantis.

I really hope that Sony/MGM doesn't use that idiotic paperbox format that Warner Brothers and many other studios use for the DVD boxed sets. I really hate those digi-pax clamshell cardbox mockups ...

I just hope that they continue the same format as they have with previous boxed sets. I do think that they'll use the formatr as previously released with their previous format:

Here's hoping that Sony continues to use the same format for the Ninth Season as well. The keepsake case will be used for the 8th Season.

I think that Stargate Atlantis is the new format for their DVD releases for new series launches on DVD.

Here's another shot of the Atlantis Season 1 box: 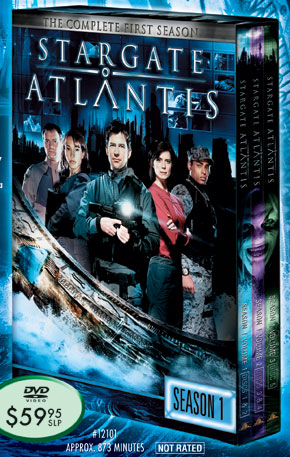 The set does include all episodes from the first season, including the pilot. The 5 discs come in 3 cases, as you can see in the picture above, so the set will be much thinner than the SG-1 sets.

Just let me guess, DVD-18's? Double Sided? I don't think so. I saw the pilot when it aired and I didn't like it and while I thought about buying this set to check out the first season in its entirety, I'm not sure.

I doubt it's DVD eighteens. MGM previously put the SG1 sets on 5 DVD nines. If those are double thins than there would be no need for DVD eighteens.

Someone want to spell it out as far as the season sets are concerned? So am I safe watching all of SG-1 S8 (it comes out next month), or should I just buy them both at once?

Dr. Elizabeth Weir, the leader of the Atlantis Expedition is the head of Stargate Command in the first two episodes of Stargate SG1's eighth season before she goes off to another galaxy. So chronologically you have:

Than at the end of the series they aquire something in the SG1 final that they need for the Atlantis final (sorry that's vague, it's a spoiler).

So the chronology there is:

It's not THAT critical that you watch them in that order, it just takes place in taht order in the timeline. To make it even more confusing, The Siege is a three-part cliffhanger.

I still don't understand why anyone thinks that DVD-18s are involved. None of the previous stargate sets have involved them. They've all used five dics. This set uses five discs.

I'm working on a timeline.

I think, Lee, that you have unnessecarily overcomplicated that to the point that it is useless for the casual viewer.

The episodes within each series obviously follow one with only the exception of the SG1 episodes Covenant and Affinity (which were aired out of production order).

So I guess I'll just get the SG-1 S8 set next month and watch it all the way through.

This type of multiple-crossover stuff is exactly the type of thing that stopped me reading comics. It is very odd a TV show has decided to go in this direction. Usually spinoffs just start with one or two episodes and then with an occasional guest-star or two from the parent series.

Let me say this again. You really don't need to watch Stargate SG-1 Season 8 in order to understand Stargate Atlantis. The Pilot episode or the first episode, the two-parter begins with Colonel O-Neil and Dr. Jackson flying all over the Earth getting the team together that goes to Atlantis.

I wish everyone would stop confusing fans who just want to get the Stargate Atlnatis set and stop acting like corporate moguls trying to get fans to buy every one of their sets.

Stargate Season 8, the episodes that everyone is talking about, only serves as a sort of interlude primer for the series. While it's nice to watch, it's not required that you pick up both sets to enjoy the Atlantis series. I have the first Seven Seasons of SG-1 so I'll probably be picking up both but while the sets are nice to have, even the eigth season, they are not required in order to buy and collect the Stargate Atlantis series.

Trust me, and Adam*M can agree with me, you won't be confused by the events in Stargate Atlantis if you pass on Season 8 of Stargate SG-1.
You must log in or register to reply here.

Head of the Class is finally seeing a DVD release with Season 1 coming out on 6/9/2020...details below.
2 Tags dvd