A fixer working for one of Hollywood’s biggest talent agencies forms the backdrop of Showtime’s first season hit series Ray Donovan. Though the Hollywood/sports types who come into the orbit of the title character are an interesting and diverse bunch, the series’ main focus is on the characters of Ray Donovan himself, his wife and children, two siblings, and his ex-con father recently let go from prison after a twenty-year stretch. For those looking for Hollywood undercover dirt, the series offers a frustrating and minimal assortment of types (former child star now nympho, gay movie action star, football star addicted to hookers), but the melodrama surrounding the eclectic family keep interest high through its initial twelve episodes. 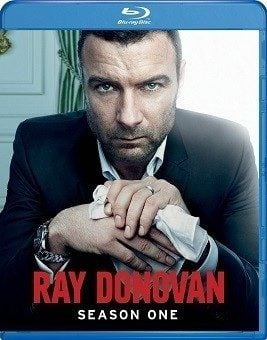 Among the many television series set in Los Angeles that really seem to catch its flavor and tempo (and sense of ridiculous lavishness often taken for granted by the people involved in its story), Ray Donovan had a strong if erratic first season. Liev Schreiber’s Ray, a poker-faced fixer with a nasty if efficient reputation around show business circles, finds managing his increasingly dysfunctional family much more trying than any of his air-headed, indulgent clients. Things go from bad to worse for Ray when his father Mickey (Jon Voight), having served twenty years for a murder he didn’t commit (actually, we come to learn was committed by later big star Sean Walker – Johnathon Schaech – with the help of Ray and his boss Ezra Goodman – Elliott Gould) arrives in Tinsel Town to reestablish ties with his four sons: Ray, ex-boxer Terry (Eddie Marsan), mentally challenged Bunchy (Dash Mihok), and mixed race Daryll (Pooch Hall), the latter sired from a long past liaison with Claudette (Sheryl Lee Ralph). To effect his early release from prison, Mickey has been spilling his insider knowledge to FBI agent Van Milkler (Frank Whaley) who plans to take down Ray and his entire organization, a subplot that carries through for the entire season.Due to Mickey’s corrupting influence, Ray’s wife Abby (Paula Malcomson), daughter Bridget (Kerris Dorsey), and son Conor (Devon Bagby) all begin exhibiting rebellious attitudes and extremely poor decision-making skills putting them in the center of constant messes that Ray must clear up. In the case of Abby, the writing becomes rather strained as we’re asked to believe that a woman who has come from nothing and now finds herself surrounded by luxury would suddenly begin to question her husband’s business practices and the necessity for secrecy dealing with his high profile clients and his unpredictable father and siblings. The season also spends an inordinate amount of time with Bridget’s burgeoning love affair with a neighboring teenaged rapper (Octavius J. Johnson) who doesn’t go to school and introduces Bridget and her brother to the joys of liquor and bongs. The numerous scenes of the adolescent couple wrangling away generally intrude on much more interesting adult situations that roil and explode at regular intervals during the season (Showtime’s Homeland also featured subplots involving a rebellious teenaged daughter with similar tedious results). By the way, “wrangling away” isn’t merely restricted to the teens. There’s plenty of adult lovemaking in many sizes and flavors during the season, too.Jon Voight has received the lion’s share of attention (and a Golden Globe with an Emmy nomination almost a certainty) for his scene-stealing performance as Mickey. It actually goes beyond performance and becomes almost a vaudeville turn with Voight seizing every moment to overindulge in antics and behaviors which would surely have gotten him “rubbed out” in the Hollywood of yesteryear. During the course of the season, he actually murders two people himself and is an accomplice in the murder of a third eluding detection and punishment in order to be available for season two of the show. Liev Schreiber is very effective as the title character keeping things bottled up until occasionally extreme emotions do force their way to the surface and overpower him. Perhaps the best performance on the show is by Dash Mihok as the mentally challenged, childlike Bunchy. Molested by a priest at age ten (one of the numerous subplots of the season revolve around this childhood occurrence and the aftermath on the family), Bunchy’s emotional growth was retarded, and he remains basically a ten-year old in a man’s body, unable to work or do anything other than wait on his father to “party” with him. Eddie Marsan as the brother with Parkinson’s, Steven Bauer as Ray’s muscle/clean-up man, and Katherine Moennig as Ray’s Girl Friday all give solid, admirable performances. Paula Malcomson is rather too shrill as Abby as is Peter Jacobson as Ray’s boss and Octavius J. Johnson a little too knowing as Marvin.Here are the twelve episodes from the first season of the show contained on three Blu-ray discs:1 – The Bag or the Bat2 – A Mouth Is a Mouth3 – Twerk4 – Black Cadillac5 – The Golem6 – Housewarming7 – New Birthday8 – Bridget9 – Road Trip10 – Fite Nite11 – Bucky Fuckin’ Dent12 – Same Exactly

The program’s widescreen television aspect ratio of 1.78:1 is faithfully rendered in 1080p transfers using the AVC codec. Images are consistently sharp and detailed with excellent, believable color and accurate flesh tones. Contrast is masterfully maintained, and black levels are superb (important since many of the various nefarious activities which take place during the episodes occur at night). The episodes have been divided into 7 or 8 chapters depending on the length of the episode.

The Dolby TrueHD 5.1 sound mix uses the wide soundstage to accurately capture the ambience of the Hollywood scene from posh Malibu parties and shopping on Rodeo Drive to the seedy environs of Terry’s boxing gym. Dialogue has been expertly recorded and has been placed in the center channel. Music from a variety of sources (rap, easy listening standards) as well as Marcelo Zarvos’s background score gets a wonderful spread through the fronts and rears.

Rather shockingly for a first year series, there are no bonus features on the discs (there is a link to simulcast texting and retrieval of bonus material from the web while watching the show).Reviewer’s note: For some reason, Paramount has not coded the discs in this set for resuming an episode where one left off nor are there bookmark codes available. Though a frequent event some years ago with home video TV releases on Blu-ray, this anomaly should never be occurring this many years into the Blu-ray format.Promo Trailers (HD): Showtime drama series, Jack Ryan: Shadow Recruit.

Created by Ann Biderman who was also responsible for the masterful dramatic series Southland, Ray Donovan isn’t quite the equal to the earlier show though it retains much of its grit and power and portrays the ruthlessness of its characters with diamond-edged sharpness. With better shaping of characters and a return to some of the very interesting show business fixes which Ray must negotiate, Ray Donovan is a show which could easily sidestep the sophomore slump when it returns for its second Showtime season later this year.