The second season of Showtime’s hit melodrama Ray Donovan focuses even more firmly on the dysfunctional Donovan family and the titular character’s continual mission to either keep his family members out of trouble or at least clean up the many messes they make before they have to pay big prices. As in season one, circumstances begin complicated and then grow to almost near-impossible levels of complexity from which there seems no escape for Ray or his family, but for all of his missteps, Ray’s calm consistency in the face of adversity and his loyalty to those he cares about (sometimes foolishly so) are what keeps viewers coming back for more. 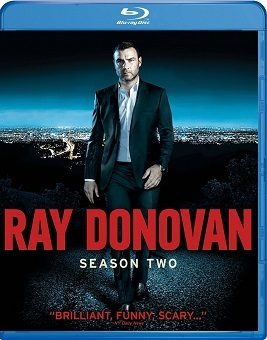 With a series of murders that he’s either committed or witnessed, Hollywood fix-it master Ray Donovan (Liev Schreiber) finds himself this season assaulted on many fronts: his wife Abby (Paula Malcomson) has had enough of his secretive life and has delivered an ultimatum – couples therapy or separation; his brother Terry wants to start over in Ireland and take his girl friend (Brooke Smith) with him; children Conor (Devon Bagby) and Bridget (Kerris Dorsey) are keeping the worst company imaginable and getting into lots of trouble; a reporter (Vinessa Shaw) from The Boston Globe smells a rat in the official FBI story of the murders that went down at the end of season one, and she’s determined to get to the truth despite the considerable danger she puts herself in dealing with this gang of cutthroats; and, a new FBI West Coast head (Hank Azaria) demands that Ray find his ex-con father Mickey (Jon Voight) and present him to the agency for interrogation. Ray had thought his problems were over with his father leaving LA and fleeing to Mexico, but under threat of prison, Ray collects his father and then his real problems for the season begin since Mickey comes back basically penniless and must once again think of ways he can keep family members close so he can use them shamelessly for his own scams and underhanded purposes.

As in season one, the show’s forward momentum is completely relentless with Ray answering his cell phone half a dozen or more times an episode with multiple problems to sort out and handle. But what was weak about season one repeats itself in season two as characters don’t seem to have learned anything from living through the events of season one and continually make the same mistakes over and over again this season: the family’s (except for Ray) trusting Mickey to do things in their best interests instead of his always doing things in his own best interest, Bridget’s repeated ditching of school to be with her gangsta rapper boy friend (Octavius J. Johnson) who gets her high at parties with thugs who would kill her as much as look at her, Abby’s continual desire to forget the fourteen years of Ray keeping the family safe and now trying to take matters into her own hands with disastrous consequences. On the other hand, the season does offer some diversions from the norm of season one: there’s a sweet romance for addled-brained Bunchy (Dash Mihok), we meet a very interesting new client for Ray, a self-help guru Steve Knight (Eion Bailey) who’s taken a fancy to Ray’s stalker/starlet from season one (Denise Crosby), and we get to see the seamy underbelly of Hank Azaria’s seemingly clean-as-a-whistle FBI West Coast head honcho Ed Cochran in a subplot we just know all season is going to blow up in someone’s face.

As was the case in the first season, Jon Voight and Liev Schreiber are on opposite ends of the acting spectrum with their respective characters: the latter cool, reserved, and underplaying triumphantly, the former overacting with great relish and seemingly without restraint. Paula Malcomson is still as shrill and tiresome as she was in the first season, and when she embarks on an affair with a squeaky-clean police detective (Brian Geraghty, very impressive), we see just how ruthless and selfish she really is (if we didn’t already have an inkling of it). Eddie Marsan and Dash Mihok continue doing fine work as the Donovan siblings caught between the two forces of nature that are their father and younger brother, and Steven Bauer and Katherine Moennig likewise are solid as Ray’s office confidents. Wendell Pierce has an excellent season as a crooked parole officer with whom Mickey gets entangled, Vinessa Shaw never backs down as the determined reporter whose ambition is foolhardy around these merciless professionals, and Omar J. Dorsey makes a very convincing record producer who doesn’t suffer fools gladly.

Here are the twelve episodes contained on three Blu-ray discs in the set. The names in parentheses refer to the participants in that episode’s audio commentary:

The program’s widescreen television aspect ratio of 1.78:1 is faithfully rendered in 1080p transfers using the AVC codec. Images are consistently sharp and detailed with excellent, believable color and accurate flesh tones. Contrast is masterfully maintained, and black levels are superb (important since many of the various nefarious activities which take place during the episodes occur at night). An occasional soft shot spoils what is otherwise a reference transfer. The episodes have been divided into 7 chapters.

The Dolby TrueHD 5.1 sound mix uses the wide soundstage to accurately capture the ambience of the Hollywood scene from posh Malibu pool parties and beachside swims to the roaring crowds at the racetrack. Dialogue has been expertly recorded and has been placed in the center channel. Music from a variety of sources (rap, easy listening standards) as well as Marcelo Zarvos’s background score gets a wonderful spread through the fronts and rears.

Audio Commentaries: Jon Voight and Pooch Hall (who plays his son Darryl) mumble and stumble their way through the season’s first episode with far too much describing what we see on the screen. Much better is Liev Schreiber’s commentary for episode 7 since he directed the show and discusses in detail his choices and decisions about his first television directorial effort.

Reviewer’s note: For some reason, Paramount has not coded the discs in this set for resuming an episode where one left off nor are there bookmark codes available. Though a frequent event some years ago with initial home video TV releases on Blu-ray, this anomaly should never be occurring this many years into the Blu-ray format.

An exciting show if not a great one, Ray Donovan sustained both its strengths and its weakness from its first season into a second successful year. The season finale suggests the possibility of a semi-reboot for season three, and one hopes the show’s strengths can be continued while some less understandable and forgivable character behaviors can be worked on and improved.

I been a fan since the first season. Glad to hear that it's been renewed for a third.
You must log in or register to reply here.