The problems just never seem to stop for the title character of Ray Donovan in now his third season of domestic and corporate mishaps. Though the drama is strong throughout the season’s twelve episodes, there’s something of a déjà vu quality to many of the events seeing as the same troublemakers from previous seasons continue to stir things up for the bedeviled Ray, and even the new problems that crop up and must be dealt with have a familiar ring to their construction. With the show renewed for a fourth season, perhaps the writers can use some of the season’s climactic events to inspire some newer, fresher circumstances for Hollywood’s top Mr. Fix-It. 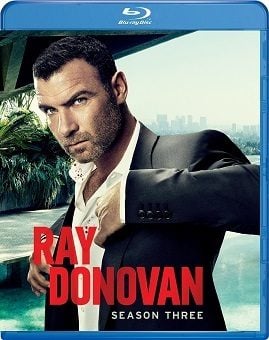 Haunted by the murder of The Boston Globe reporter who had gathered enough evidence to send him and his associates to jail for a long time, Ray Donovan (Liev Schreiber) cuts loose his two associates Avi (Steven Bauer), who had killed the woman acting in Ray and his company’s best interests, and Lena (Katherine Moennig) and sets out to be a one-man operation. After doing some sterling work for one of Hollywood’s richest moguls Andrew Finney (Ian McShane), Ray is offered a contract with his organization, but he doesn’t want to work permanently on anyone’s payroll ever again. However, when brother Terry (Eddie Marsan) who is now in prison taking the fall for a heist gone wrong instigated by their ne’er-do-well father Mickey (Jon Voight) is marked for death by the Aryan Nation, Ray must ask a favor of Andrew who is best friends with the governor who can get Terry’s conviction pardoned. Andrew and his ambitious daughter Paige (Katie Holmes) have plans to establish a new football franchise in Los Angeles, and Ray in his newly hired role as right-hand man for Finney is offered a 3% share of the franchise, an opportunity that gives Ray hope that perhaps he can finally leave all of the problems he faces with his present occupation behind.

Of course, things never go smoothly for Ray Donovan, not with his problematic family always finding themselves in hot water and mainly due to the machinations of the ever-plotting Mickey. This season, Mickey decides to open his own prostitution and drug business, but it isn’t long before he finds himself up to his neck in debt to the Armenian mafia in L.A. run by the chain smoking Mrs. Minassian (Grace Zabriskie) and in the sights of the LAPD. As in previous seasons, Mickey’s schemes seem to lead everyone else to prison, at various times this season dragging down two of his sons Bunchy (Dash Mihok) and Daryll (Pooch Hall) and leading to more than one beating and firestorm as the violent gang pressures him for payment. Elsewhere, seventeen-year old Bridget Donovan (Kerris Dorsey) develops an obsession with her calculus teacher Mr. Donellen (Aaron Staton) who is grieving over the loss of his wife in a car accident. Her relentless stalking of the man adds more chaos to the already floundering Donovan family especially since wife Abby (Paula Malcomson), still miserably unhappy over Ray’s neglect and the end of her affair with a policeman, flies off to Boston to connect with her own family leaving the dysfunctional children to fend for themselves.

While the acting is first-rate from all of the regular cast (Schreiber and Voight continue to earn Emmy nominations for their work), it becomes rather ludicrous that many of these individuals still buy into Mickey’s dreams of glory despite the fact that every one of them has been burned by his criminal enterprises and yet surprisingly don’t ban together to ride him out of town on a rail. Even Ray himself, after putting a hit out on his old man during season one, actually comes to his rescue a couple of times this season in a rather absurd plot development instead of making him pay for all of the harm he has done and continues to do to the family. The Bridget/Mr. Donellen stalker subplot is very unsatisfying and occupies quite a bit of the season. The third season does have some compensations, however: there’s a sweet romance for Bunchy with an all-business, tough-minded Lucha Noche wrestler Teresa (Alyssa Diaz), and there’s a compelling subplot with a priest (Leland Orser) who’s been gathering information on the disappearance of the priest who had molested the Donovan boys (he had been killed by Bunchy and Ray and the body disposed of in an earlier season). Former FBI West Coast head now low-ranking detective Ed Cochran (Hank Azaria) makes a too coincidental return to the series as he is the one asked to vet the prospective new NFL franchise owners and who sees red when Ray Donovan’s name and face are placed before him. Ian McShane seems to be having a ball playing the billionaire mogul hiding a raft of secrets, but Katie Holmes as his vampy daughter seems to be trying too hard to be sultry and alluring (qualities not exactly in her wheelhouse, especially with the full set of orthodontics which is not a good look for her).

Here are the twelve episodes contained on three Blu-ray discs in the season three set:

The program’s widescreen television aspect ratio of 1.78:1 is faithfully rendered in 1080p transfers using the AVC codec. Images are consistently sharp and detailed with excellent, believable color and accurate flesh tones. Contrast is masterfully maintained, and black levels are superb (important since many of the various nefarious activities which take place during the episodes occur at night). An occasional soft shot spoils what is otherwise a reference transfer. The episodes have been divided into 7 chapters.

The Dolby TrueHD 5.1 sound mix uses the wide soundstage to accurately capture the ambience of the Hollywood scene from posh business offices to the roaring automobiles on the jammed freeways. Dialogue has been expertly recorded and has been placed in the center channel with occasional and most welcome use of directionalized dialogue. Music from a variety of sources (rap, easy listening standards) as well as Marcelo Zarvos’s background score gets a wonderful spread through the fronts and rears.

There are no bonus features with this release.

Reviewer’s note: For some reason, CBS/Paramount has not coded the discs in this set for resuming an episode where one leaves off nor are there bookmark codes available. Though this oversight was a frequent event some years ago with initial home video TV and movie releases on Blu-ray, this anomaly should never be occurring this many years into the Blu-ray format.

While the picture and sound quality are as good as ever and the acting can be aces, the third season of Ray Donovan seems just a bit to be traveling in circles. With several characters leaving the city at the end of the season (at least for a time), perhaps season four will bring forth a fresh set of storylines which can reignite the spark that the series had so profoundly in season one.