Gil Kenan’s 2015 remake of Poltergeist, Tobe Hooper’s entertaining 1982 comedy/thriller, is professional to its core, but the big question is: why the remake? Is it because today’s CGI enables the filmmakers to better realize paranormal activity? Is it because they can use 3D now (though it was certainly available in 1982 as well) without the stigma of the film being labeled cheesy or in need of help by adding another dimension to its imagery? Whatever the reason, the film doesn’t match its predecessor: it’s got a fair number of shock moments and some good performances, but it’s also missing some very key elements. 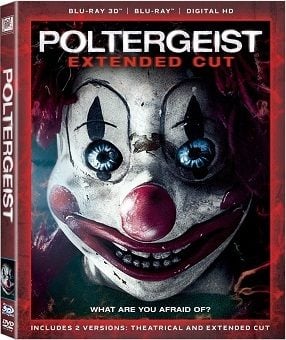 Out of work businessman Eric Bowen (Sam Rockwell) brings his wife Amy, son Griffin (Kyle Catlett), and daughters Kendra (Saxon Sharbino) and Maddie (Kennedi Clements) to live in a foreclosed house in a subdivision many of whose owners have been hit hard by the recession. Griffin who suffers from anxiety problems anyway is the first to get a bad vibe from the house, but his apprehensions are dismissed as merely his nerves working overtime. But six-year old Maddie seems to be communicating with unseen presences, and there are enough oddball events during the family’s first days there (flickering lights, electronics going haywire) to suggest all is not well. At a party in the neighborhood, Eric and Amy learn that the entire development was built on a former cemetery which had allegedly been moved elsewhere, but a frantic phone call that Maddie is missing summons the Bowens back home, horrified to learn that their youngest child is in some nether world they have no access to except to vaguely hear her through a television. Consulting paranormal specialist Dr. Brooke Powell (Jane Adams) and her former husband Carrigan Burke (Jared Harris), they learn the house is filled with poltergeists, angry spirits who have taken young, innocent Maddie who they believe can take them to the light.

Playwright David Lindsay-Abaire provides the script here, a variation on the original Steven Spielberg-Michael Grais-Mark Victor screenplay for the original movie, but while it hits the basics of the original story (down to the motivation for the spirits' anger), it’s lacking one primary element: humor. The unsettling but perky early scenes of the original movie are tramped down in the remake, possibly due to the father being out of a job (so how do they afford a new house, even if this new one is smaller than they were used to before?) and the children being quarrelsome and inwardly troubled. Director Gil Kenan does a good job with the early scenes of increasing apprehension (a creepy box of clown dolls hidden in an attic compartment is very disquieting) with odd electronic disturbance, weird noises around the house, and a couple of genuinely startling “boo” moments, but once the poltergeists begin their attack on the family and its house, it’s pretty much all stops out until the final moments where logic goes out the window, and one must simply succumb to the fanciful notions of this familiar ghost story. Neither Dr. Brooke Powell nor TV ghost hunter Carrigan Burke can match the disturbing vibe of Zelma Rubenstein’s Tangina from the original movie who interprets the poltergeists’ actions and assists in the rescue of the abducted child, and they’re much less interesting either separately or together.

The cast all acts professionally with Sam Rockwell a particularly patient dad and Rosemarie DeWitt a mother of warmth and tenderness with her three very different children. The two younger children acquit themselves especially well with Kyle Catlett’s Griffin noticeably sensitive and needful and Kennedi Clements particularly precocious mimicking the naughty words she hears others say and generally creating her own good time. Saxon Sharbino as the teenaged Kendra is characteristically rebellious and addicted to her phone, looking on all who aren’t her as lame and unnecessary. Jared Harris as the TV medium is the most outlandish of the characters, but he rather underplays rather than going over the top robbing the film a bit of a sense of twinkly mischief, fitting rather disappointingly into director Gil Kenan too somber approach to the material. Jane Adams is solemn but not especially notable as the paranormal academic expert.

The film’s original 2.40:1 theatrical aspect ratio is faithfully presented in this 1080p transfer using the MVC/AVC codec. Sharpness is all one could wish with a smooth blending of live action filming and the added CGI supernatural elements. Color is robust with accurate skin tones, and black levels, very important in this film with a cavernous black void which swallows up those whom the poltergeists desire, are deliriously deep and inky. The movie has been divided into 24 chapters.

The use of 3D is slightly better than average, but only part of the movie successfully utilizes the added dimension. The sense of depth isn’t always consistent throughout the movie, and there are scenes when one would be hard pressed to even realize this was a 3D film. Yet, at other moments, the black inner reaches of Maddie’s closet seem to go on forever, and the placement of objects in separate fields can sometimes be very impressive. There are three primary jump out moments where forward projection is attempted, but only one – with a drill bit coming out toward the audience (and a trapped character) – is really effective. The others, a jumping rodent and a collapsing surprise house of cards, happen too quickly to make much of an impact.

The DTS-HD Master Audio 7.1 sound mix is alive with split surround effects utilizing all available channels where appropriate, especially effective in a ghost story when bumps in the night and creaks, moans, and groans can happen in individual speakers in the soundstage to great effect. Dialogue has been well recorded and has mostly been placed in the center channel though once Maddie is taken, there are some effective moments when her voice emanates from behind the viewer making the listener wish more had been done with directionalized dialogue. Marc Streitenfeld’s score likewise gets a full spread through the fronts and rears.

The 3D disc contains only the theatrical cut of the film and a scene selection and setup menu.

The 2D disc in the set also includes these bonus features:

Extended Version of Poltergeist (1:40:53, HD): the unrated version of the movie contains seven additional minutes accounted for by six scenes which have added moments not in the theatrical cut.

Alternate Ending (1:46, HD): a slightly different ending to the film.

Image Gallery: a step-through gallery with twelve color shots from the movie.

Promo Trailers (HD): Before I Wake, The Exorcism of Molly Hartley, The Pyramid.

A perfectly acceptable 21st century version of Poltergeist which offers 3D and a more somber tone to the basic story of the 1982 original, many people will choose to stay loyal to the Tobe Hooper (produced by Steven Spielberg) original film. This one does offer reference picture and sound for those who are curious about it.

Matt, although I haven't seen this unnecessary remake, I find it interesting that you mention the lack of humor, especially since the director, Gil Kenan, made sure to include enough humor to offset the scarier moments in his first film, Monster House.

Todd Erwin said:
Matt, although I haven't seen this unnecessary remake, I find it interesting that you mention the lack of humor, especially since the director, Gil Kenan, made sure to include enough humor to offset the scarier moments in his first film, Monster House.
Click to expand...

Exactly. I knew he had done Monster House, but those two entities are as different as night and day in tone.

I'm frankly happy to just stay with the original 1982 movie. I do wish that one would eventually get a real deluxe release, but the production history is so tangled that we may never see that day. (And I wish we could see the full version of the movie, including that one line they cut out of Steve and Diane Freeling's visit to the neighbors, as the existing cut has that scene looking badly shorn.)

Pass on this I have no intentions of buying and wasting £20.00 on this dud.


POLTERGEIST (1982) on Laserdisc and R1 DVD in DOLBY STEREO rules.