Among his many other accomplishments during his career, Walt Disney introduced quite a few impressive young performers to his television and cinematic audiences. Among his greatest finds was Hayley Mills, the daughter of distinguished British actor John Mills, who first worked for the company enlivening its 1960 comedy-drama Pollyanna. It’s a lovely film version of the novel by Eleanor H. Porter, and even though it plays a little long and could have been edited a bit more judiciously, the movie still scores in all of its major moments of joy and heartbreak, and it features a very impressive cast of award-winning actors, a list which young Miss Mills would join after the release of the film. 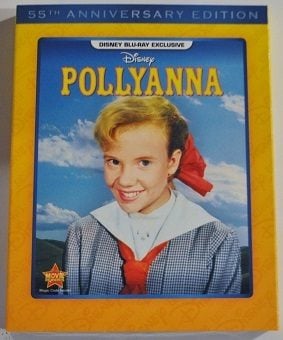 Orphaned after the death of her missionary parents, young Pollyanna Whittier (Hayley Mills) is taken in by her wealthy Aunt Polly (Jane Wyman) who practically owns and runs her town. Her aunt and her expansive home are cold and cheerless, but Pollyanna brims with sunshine, never giving in to self-pity and always finding something positive in the most negative of circumstances. Before long, she’s charmed a reclusive child hater Mr. Pendergast (Adolphe Menjou) into playing with her and young orphan Jimmy Bean (Kevin Corcoran), brought hypochondriac Mrs. Snow (Agnes Moorehead) out of her pretend sick bed, given hellfire and brimstone preacher Paul Ford (Karl Malden) a different approach to winning over his congregation, and played matchmaker to housemaid Nancy Furman (Nancy Olsen) with enterprising George Dodds (James Drury). But no matter what she does, she’s not able to melt the heart of her aunt, and not even her aunt’s old beau Dr. Edmond Chilton (Richard Egan) seems able to rekindle feelings of love and affection.

The adaptation of Eleanor Porter’s book is by the film’s director David Swift, and he’s made sure in both the writing and direction that any possibilities for saccharine scenes or syrupy treacle are avoided giving the movie a ginger snap quality of tartness without a truckload of sugar. Swift does have a tendency to dawdle a bit in certain sequences: the minister’s initial hellfire sermon goes on far too long with too little resulting comic inserts to merit its length: we get the point quickly and the payoff later in the film would have been just as effective with the first sermon being half as long. The wonderfully colorful and fun bazaar sequence late in the film (the sight of Hayley Mills eating everything in sight is truly funny) is marred by having his star sing two choruses of “America the Beautiful,” once with the ensemble and once in solo, but her light, slightly quavery voice isn’t good enough to justify that solo. But the period sets and costumes show Disney sparing no expense in establishing this pre-World War I society, and one feels instantly transported back to a more innocent era the moment the movie begins.

Boasting a cast with three Oscar-winning actors and three others who received one or more Academy Award nominations during their long careers, the cast list is indeed a distinguished one. The movie doesn’t offer Jane Wyman great range in the role of Aunt Polly, but she certainly has the forcefulness and authority to make the part her own. Richard Egan makes an attractive foil for the stern Aunt Polly, while great character actresses like Reta Shaw, Nancy Olsen, and Mary Grace Canfield as the household help are a joy to see as they slowly succumb to Pollyanna’s “Glad Game” efforts. As three townspeople Pollyanna most notably influences, Agnes Moorehead, Adolphe Menjou, and Karl Malden are delightful in their before-and-after personas. And, of course, Hayley Mills, who earned an honorary miniature Oscar for her performance (the last time this prize was ever awarded; now children can only compete in the regular acting categories), manages the impossible task of making Pollyanna likable without a touch of cloying behavior or excess sweetness. She doesn’t try to refrain from her natural British accent, but being the child of missionary parents, one accepts it without pause. In other important roles, Donald Crisp as the mayor, Kevin Corcoran as the mischievous orphan Jimmy, and Edward Platt as a henpecked husband who finally gets the backbone to stand up to his recalcitrant wife (Anne Seymour) all make major impressions.

The film has been framed at 1.66:1 and is presented in 1080p using the AVC codec. With much stronger, more vivid color than the previously released Special Edition DVD, the Blu-ray transfer is mostly outstanding with healthier skin tones present. Sharpness (after the opening credits) is quite good, and contrast only occasionally seems a little off. Black levels are very good but are not of reference quality. The movie has been divided into 24 chapters.

Disney has not used a lossless sound encode here, opting instead for Dolby Digital 2.0 which Dolby Prologic decodes into the center channel. It’s a more than decent mix with dialogue always easily discernible and combined accurately with Paul Smith’s jaunty music and the precise sound effects of the era. Age-related problems with hiss, crackle, and the like are non-existent.

There are no bonus features at all on this Disney Blu-ray specialty release.

Pollyanna may not have been a huge box-office hit in its original release in 1960, but time has treated the film very kindly accentuating its vibrant performances and most appealing period detail along with its affecting story which works its magic over a slightly overlong 2 ¼ hours. The movie is offered as part of the Disney Movie Club (www.DisneyMovieClub.com) though you can certainly find it offered for sale with varying prices at Amazon (see below) and with other marketplace sellers. Recommended (though keep the old Special Edition DVD for those cherished bonus materials)!

David Swift himself complained about the length of the film, and said that Disney wouldn't allow him to trim it down (even adding some scenes in second-unit, like Jimmy Bean catching the fish, without his prior knowledge).

classicmovieguy said:
David Swift himself complained about the length of the film, and said that Disney wouldn't allow him to trim it down (even adding some scenes in second-unit, like Jimmy Bean catching the fish, without his prior knowledge).
Click to expand...

Very interesting! Thanks for the information, Byron!

But then again, every film I've seen directed by David Swift is the best part of 2 hours plus...

I've never thought "Pollyanna" too long in any of my viewings.

Virgoan said:
I've never thought "Pollyanna" too long in any of my viewings.
Click to expand...

Truth be told, neither have I, but some scenes do linger.

Here's hoping for international release .. Australia or the UK .. the marketplace sellers via Amazon charge way too much for both the product and the shipping.

These Disney classics ought to have made their way to legitimate, mainstream Blu-ray with all the extras afforded their Vault Disney DVD counterparts. The logic behind these bare bones 'exclusives' baffles me, although I will concede, owning virtually all the Blu-rays that have since come down the pipeline, the quality is unquestionably superior to the DVD's which were, frankly, a mess!

This is one of my favorite movies. I never get tired of watching it. This is probably the best it will ever look. It looks a bit faded out and they have admitted the negative has faded. But this looks sharp and very clean. The 1.66:1 ratio feels like we're getting the full frame. There are no extras.

Nick*Z said:
These Disney classics ought to have made their way to legitimate, mainstream Blu-ray with all the extras afforded their Vault Disney DVD counterparts. The logic behind these bare bones 'exclusives' baffles me, although I will concede, owning virtually all the Blu-rays that have since come down the pipeline, the quality is unquestionably superior to the DVD's which were, frankly, a mess!
Click to expand...

There was nothing stopping Disney from keeping the extras. Nothing at all. They just chose the path that involved the least amount of effort, which isn't to say no effort at all, but not nearly as much as they have the ability to, which they have demonstrated in the past that they do.


But you are absolutely right that their DVD output was inconsistent. It took them three years of non-anamorphic DVDs that didn't even look as good as laserdiscs to get them to start doing anamorphic transfers, and even after that they sometimes used older open-matte or 4x3 matted transfers, or worse yet, 4x3 versions of 2.35:1 films like The Great Locomotive Chase and Condorman. Now they're actively trying to make HD masters of as many movies as possible. If they didn't have decent masters ready when they released them, they should have waited to release them until they did.

I just keep thinking about how terrific The Happiest Millionaire would look after a good transfer and a Blu release.


I hate to admit it, but I would buy me a copy--even with no extras.


I already have Pollyanna and Old Yeller. And THM is one of my all-time favorites. I remember thinking the DVD looked pretty darn good when it came out. I'm guessing a proper transfer would make it look incredible...even with all the obvious matte paintings and such.

There are too many great Disney live action movies MIA on home video, or presented presently on home video in less than stellar quality. FYI for fans - the Disney exclusive of Swiss Family Robinson - one of my all time favorites - is stunningly handsome. A must have/must own disc in my opinion; again, bare bones. So I kept the extra features disc from my old Vault Disney DVD to augment it.


But where oh where are the following titles?

Third Man on the Mountain

The Sword and the Rose

The Journey of Natty Gann

Darby O'Gill and the Little People

The Light in the Forest

In Search of the Castaways

The Three Lives of Thomasina

The Island at the Top of the World

The Last Flight of Noah's Ark

I won't even mention Song of the South or So Dear To My Heart; all but forgotten gems by most everyone today, including the exec's toiling at Disney Inc.

At least So Dear to My Heart got a DVD release via the Disney Movie Club (a dear friend gave me a copy for Christmas several years ago). Would that Song of the South had been so lucky.

The review for the Blu-ray of Swiss Family Robinson will be along tomorrow.

Someone advised me to seek out the Brazilian DVD of So Dear to My Heart some years back. I think it was because it included extras. As I recall, the cover is in Portuguese but the content is all available in English.

I'd love to have MOONSPINNERS and BLACKBEARD'S GHOST.

Indeed. Moon-Spinners, please.
You must log in or register to reply here.