Some movies exist for entertainment, while other exist for the sole purpose of selling more merchandise. Monster High: Scaris, City of Frights falls into the latter category. Tweenage girls may delight in the "movie," but parents may have nightmares from allowing their children to watch it. 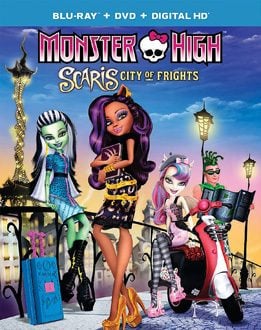 Clawdeen Wolf (voiced by Salli Saffioti) wins an apprenticeship to study with fashion designer Moanatella Ghostier (voiced by Cindy Robinson) in Sacris, France. Her friends from Monster High join her on her adventure, and uncover a secret plot beneath the streets of Scaris.

For those unfamiliar with the Monster High franchise of movies and merchandise, it is a line of fashion dolls launched by the Mattel toy company in 2010 that also includes key chains, stationery, play sets, etc., much like their line of Barbie merchandise. Monster High: Scaris, City of Frights first premiered on Nickelodeon in March of 2013, and is just now making its way to home video courtesy of Mattel's video licensing deal with Universal. The movie's direct to cable roots are evident not only in the animation (which is abysmal, even for a made for TV movie), but also the storyline and overly annoying puns on modern pop culture. To tell you the truth, I grew tired of this film after only ten minutes, and if I had not been tasked to review it, I would have depressed the eject button at that point. The animation is about on par with what you would see as cut scenes on a video game that had been mastered for the early days of PlayStation 3 (and that is being generous). Characters and objects move too fluidly, facial expressions are almost non-existent, hair looks too much like fabric rather than strands of hair, and there is an overall softness that has been added to help cover up the flaws in the animation. The story and lessons learned by the characters are repetitive, and by the end the viewer will likely forget what the movie was about.

Monster High: Scaris, City of Frights arrives on Blu-ray in a AVC-encoded 1080p transfer that many may find looks almost as if it was upscaled from a 480p source. That is likely not the case, and the fault may lie more in the quality (or lack thereof) in the animation techniques and how those shortcomings were overcome in the eventual source master. As I noted above in my review of the content, there is an overall softness in the image, almost a haze, that appears throughout, thereby reducing most of the fine detail. The color palette leans more towards pastels, and for the most part, they are consistent, but are often dull and lifeless, which is odd considering this is supposed to be about high fashion design.

If I were to be asked if there was anything good about Monster High: Scaris, City of Frights, it would have to be the DTS-HD Master Audio 5.1 track. This is a rather lively and active track, with a good low-end bass response and immersive surrounds. Dialogue is directed mostly to the center channel, but never gets drowned out by the score or sound effects.

Definitely for tweenage girls, Monster High: Scaris, City of Frights may be challenging viewing for adults. The good news is that for families that subscribe to the Netflix streaming service, the movie (along with several other films in the franchise) is readily available, along with the Ever After High series.