Aimed specifically at pre-teen girls, An American Girl: Grace Stirs Up Success follows 2015’s American Girl of the Year Grace as she travels to Paris, learns to bake at her Aunt and Uncle’s Patisserie, and tries to save her grandparent’s bakery by entering the MasterChef Junior contest. 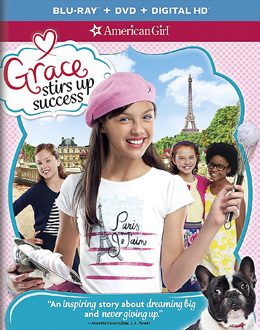 Grace (newcomer Olivia Rodrigo) loves to bake, especially in her grandparents bakery, with their malfunctioning refrigerator and oven. So much so, that she decides to start her own bakery with her friends as her way of earning extra money over the summer to buy a new bicycle. Opening a booth adjacent to the baseball field, Grace shows her knack for marketing by decorating the cupcakes in the two teams' colors, and quickly sells her entire inventory to both teams after the game. But the success is short-lived, when her mother (Virginia Madsen) tells Grace that the two of them will be spending much of the summer in Paris helping her Aunt Sophie (Lili Bordan), who is pregnant and on bed rest. The good news is that Grace can help and learn from Uncle Bernard (Fabrice Michel), who runs a popular Patisserie with Sophie and his daughter, Sylvie (Eloise Webb), who is around the same age as Grace. Grace and Sophie don't hit it off at the start, and Grace tries too hard to please her Uncle, leading to many disasters in the kitchen. When Grace learns that Uncle Bernard has been trying, unsuccessfully, to strike a catering deal with the hotel manager across the street, she and Sophie find a common goal and become friends as the two try to sneak in samples to the manager. In the process, Grace learns there is more to baking than just following the recipe. When she returns home, she learns that her grandparents' bakery is about to close due to declining sales, being unable to keep up with their bills, and failing kitchen equipment. But her grandmother (Krisztina Peremartoni) secretly entered Grace into the MasterChef Junior reality show, and Grace uses what she learned in Paris to win the contest and save the bakery.

There may be a lot of spoilers in my summary, but Grace Stirs Up Success is so predictable, most adults will likely figure out where each plot point is going to end up. Olivia Rodrigo brings a lot of spunk and brains to Grace, and she may have a career ahead of her. Virginia Madsen, the only American actress in the film, plays Grace's mother as a bit too understanding, never really offering Grace any solid advice other than "don't try so hard" or "ask how you can help and you can earn your Uncle's respect and trust." The rest of the movie features a mostly European cast (it was filmed almost entirely in Budapest), which would explain why many of the adult Americans have a slight French accent. For its intended audience, An American Girl: Grace Stirs Up Success is a sweet, fluffy pastry that preteen girls will eat up, but parents will tire of quite easily.

Captured digitally on the Arri Alexa in the 2.40:1 aspect ratio, the 1080p image is what one would expect from a recent direct to video release (with the possible exception of the wide aspect ratio). Colors are vibrant, natural, and consistent. Detail is exceptional, allowing the viewer to see the artistic strokes in the frosting and glazes of the baked goods on display throughout the film. Contrast is quite good, as well, with deep blacks that never appear to crush and bright whites that never bloom.

The DTS-HD Master Audio 5.1 soundtrack is front heavy, as one would expect from a direct to video children's film, with some occasional surround activity limited to atmospheric effects and music. Dialogue is directed mostly to the center channel, and is clear and understandable, despite the thick accents of some of the actors.

The bonus features are aimed at the movie's core audience, lasting only a few minutes each with quick cuts for those with short attention spans. The disc starts with trailers for Monster High: Scaris, City of Frights and An American Girl: Isabelle Dances Into the Spotlight.

Meet Bonbon (1080p; 1:32): The animal trainer discusses his role in training the dog, Bonbon, featured in the film.

Playing Dress Up (1080p; 1:10): Behind the scenes footage of Grace and Sophie's hotel adventure.

DVD Copy: The movie in 480p and Dolby Digital 5.1, trailers for Monsters High: Scaris, City of Frights, An American Girl: Isabelle Dances into the Spotlight, An American Girl: Saige Paints the Sky, and An American Girl: McKenna Shoots for the Stars, and the bonus features MasterChef Junior, Doggie Day Spa, and Playing Dress Up.

An American Girl: Grace Stirs Up Success is a fluffy confection that may be too much for parents, but is sure to please their preteen girls. The same can be said of the bonus features included on the disc, but it does boast excellent audio and video.