Disney’s three most prolific stars of his cartoons Mickey Mouse, Donald Duck, and Goofy have appeared together in films other than animated shorts before (Fun and Fancy Free, the extended featurette Mickey’s Christmas Carol), but their 2004 adventure The Three Musketeers is their first feature film as a starring trio. Alas, despite some cute moments and decent character animation and voice work, the film is rather second-tier Disney with a real lack of animation pizzazz and a story that would have played out better as a short rather than a feature. A promising idea has been wasted in this second-rate attempt at a feature film. 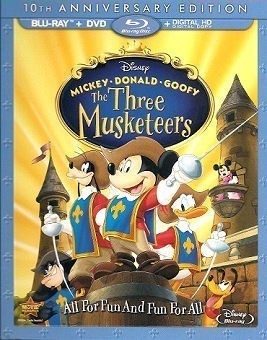 After being rescued by royal musketeers as kids, Mickey Mouse (Wayne Allwine), Donald Duck (Tony Anselmo), and Goofy (Bill Farmer) dream of one day being musketeers themselves. When the time comes for them to apply for the jobs, head musketeer Pete (Jim Cummings) laughs them out of the room, but he later rethinks his plan since he wants to abduct Princess Minnie (Russi Taylor) and crown himself king, but he needs some bungling guards like the three misfits in order to have no trouble with the abduction. His plan seems to be a success when he kidnaps the princess and also manages with his stooges to either scare away or put the lives of his three newest recruits in jeopardy. Once Mickey, Donald, and Goofy learn of Pete’s treachery, they must summon up every ounce of courage and fortitude they can muster in order to thwart him.Evan Spiliotopoulos and David M. Evans work the usual comic slapstick mayhem for the three stars into their screenplay: Mickey’s shy charm, Donald’s fiery temper and innate cowardice, Goofy’s stupidity, and there are actually some amusing moments between Minnie and her lady-in-waiting Daisy Duck (Tress MacNeille) as they assess the winning qualities or lack thereof of their new set of bodyguards. But the writers throw in anachronisms by the bucketful (Minnie and Daisy eating junk food in 17th century France, references to The Mickey Mouse Club and other shows and movies) that aren’t really clever, and they also misguidedly turn this into a musical by adding new, not especially witty lyrics to classic melodies by Offenbach, Strauss, Tchaikovsky, Beethoven, Grieg, and Gilbert and Sullivan to serve as the score. This being a DisneyToons feature, there is a cheapness to the backgrounds used throughout this period costume piece: a lack of splash and vivacity that wrings a lot of the entertainment value for adults out of the artwork with the regrettable lack of visual splendor. Younger children won’t mind, of course, but one of the real testaments to Disney’s best work is its appeal to both young and old. There is very little here that would hold the attention of adults even for the slightly more than one hour running time.The actors now voicing Mickey and Donald, Wayne Allwine and Tony Anselmo, are more or less reasonable substitutes for their originators, but Bill Farmer as Goofy is no patch on Pinto Colvig even with the overuse on several occasions of Goofy’s hilarious falling yodeling yelp to help sell the character. Jim Cummings does a very good job with Peg-Leg Pete, and a new narrating turtle character plays the Troubador who sings his way through the story. He’s voiced by Rob Paulsen quite entertainingly. As the three primary ladies of the story, Russi Taylor’s Minnie, Tress MacNeille’s Daisy, and April Winchell’s Clarabelle all do well with characters who are from the start obvious inevitable romantic partners for our three heroes.

The film has been framed at 1.78:1 and is presented in 1080p using the AVC codec. While the backgrounds are flat and mostly uninteresting in terms of their artwork, foreground characters are sharp and clear and the imagery boasts strong color which is suitably under control throughout the presentation. There is some minor banding to be seen later in the film, but otherwise the image is clean and features nice contrast and solid lines in the artwork. The film has been divided into 12 chapters.

The DTS-HD Master Audio 5.1 sound mix is most impressive with its use of directionalized dialogue particularly early in the movie making full use of its surround soundstage. All of the dialogue has been well recorded and is easy to understand (well, occasionally Donald’s squawking thwarts even the best of us). The background music score by Bruce Broughton and the songs sung by the cast all get nice placement in the fronts and rears. There isn’t much use made of the deep soundstage for atmospheric effects, however.

Get Up and Dance! (1:47, SD): three child dancers move to the beat of the film’s theme music “All for One, One for All.”Deleted Scenes (4:56, SD): five scenes are shown in montage (many in pencil tests or in-between artwork) with optional commentary available explaining why they were eliminated.Cast Commentary (5:08, SD): Mickey, Donald, Goofy, and Pete comment on an early scene while the guys are still custodians of the castle.Get the Scoop! (9:39, SD): Disney Channel star Monica Lee hosts interviews with the film’s director Donovan Cook, producer Margot Pipkin, and others telling about the making of the movie.Sing Along Songs (7:16, HD) the six musical sequences in the movie can be played separately or in montage with subtitled song lyrics for sing alongs.Promo Trailers (HD): Sleeping Beauty, Legend of the Neverbeast.DVD/Digital Copy: disc and code sheet enclosed in case.

The Three Musketeers is not one of the great Disney animated features and serves as a somewhat wasted opportunity to pair the studio’s three biggest cartoon stars in a quality feature film. But young children will probably enjoy it, and it’s bright and colorful enough to pass the time amiably with familiar characters.

Why no link to order it so we can help HTF?

Virgoan said:
Why no link to order it so we can help HTF?
Click to expand...

Because it currently isn't showing available at Amazon (that I could find). Possibly another title affected by the ongoing contract dispute between Disney and Amazon.

Thank you, Neil. That's exactly right. The DVD and iTunes versions are there, but not the Blu-ray. I had to scan the slipcover to have cover art for the review.

A dispute between Disney and Amazon??!! That's wonderful. I buy all my Disney Blu rays from Amazon.

Virgoan said:
A dispute between Disney and Amazon??!! That's wonderful. I buy all my Disney Blu rays from Amazon.

If it's like the Warners one, it doesn't really matter because Amazon still stocks the product on the release date and generally matches the lowest price advertised by Target or Best Buy.

All the other Disney titles coming out on the 12th were listed...and I had pre-ordered all but the documentary and "The Three Musketeers".

Virgoan said:
All the other Disney titles coming out on the 12th were listed...and I had pre-ordered all but the documentary and "The Three Musketeers".
Click to expand...

Muppets Most Wanted is also not available although there is a listing for it.

There was a pre-order up for Bedknobs and Broomsticks which I promptly canceled as soon as the reviews started coming in.
You must log in or register to reply here.