If ever a genre seemed tailor made for Andy and Lana Wachowski's trademark blend of big action and big ideas, it is space opera. Jupiter Ascending presents their spin on the genre made recently resurgent by the phenomenal success of Marvel's Guardians of the Galaxy. 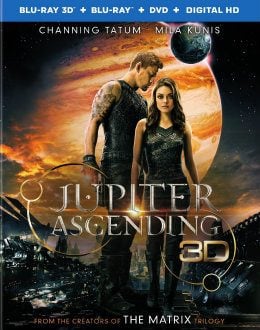 In Jupiter Ascending, Mila Kunis plays Jupiter Jones, a young woman who emigrated with her mother (Kennedy) from Russia as a child after the tragic death of her father. She makes her living as a maid In Chicago where she lives with her large extended family. Convinced by a cousin to make the family a few thousand bucks by donating eggs at a fertility clinic, she is suddenly attacked by the workers who are revealed to be aliens. After being saved from her attackers by Caine Wise (Tatum), a human gene spliced with wolf DNA. She finds out that she is the genetic recurrence of the matron of one of the universe’s most powerful families, the Abrasaxes. She also learns that she is the heir to her predecessor's holdings, which include the Earth. This makes her a pawn in the political and economic battles waged by her predecessor's three children (Redmayne, Booth, and Middleton), setting her off on a space spanning series of adventures to claim her inheritance while negotiating the cutthroat complexities of the Abrasax family business.

Jupiter Ascending works sporadically on a sequence by sequence basis, but it is saddled with a frustratingly passive protagonist, annoyingly cartoonish antagonists, and too many big ideas than it has the time or inclination to contend. The character of Jupiter Jones does little beyond getting stuck in a cycle of being trapped and rescued repeatedly by Caine Wise. There is nothing particularly wrong with Kunis' performance, it really just boils down to a tepidly conceived character. By the end of the film, she seems modestly better at running away from danger than she was earlier, but that is the extent of her growth. Eddie Redmayne's portrayal of Balem, the most villainous of the Abrasax siblings, is so cartoonish and affected that it is almost impossible to perceive him as a legitimate threat, even when he is trying to kill families and destroy worlds.

Around and in between all of the capturing and rescuing, the Wachowskis have interwoven enough big ideas and world-building to fill up half a dozen movies. There's an alternate origin for humanity, a genetically spliced underclass, a sledgehammer subtle analogy for capitalistic consumption, political intrigue, hidden agendas, family drama, explanations for bee behavior, a half dozen or so unique environments, shame and redemption arcs for a few characters, a bureaucratic montage with an undeniably great cameo, a quirky family of Russian immigrants, and a light sprinkling of references to the Wizard of Oz, all of which are under-served by the filmmakers.

If one accepts that fact that none of this is going to be done justice over two hours plus credits, the film does have some discrete pleasures to be found in audaciously conceived design elements and individual sequences. My personal favorite is an aerial chase through the skies of Chicago at dawn. It's an incredibly visceral blend of editing, effects, stunts, architecture, and magic hour cinematography that is unlike anything I have seen before (including the full daylight aerial chase sequence through the same city from last summer's Transformers: Age of Extinction.)

Both the 3D and 2D Blu-rays have the film's original English language soundtrack presented in Dolby Atmos which is carried as a 7.1 Dolby TrueHD track. I do not have an Atmos set-up or decoder, but was thoroughly impressed by what I heard. Fidelity is outstanding across dialog, music, and effects tracks. Effects and music are spread wide and precisely through the entire sound field and nicely compliment the similarly impressive visuals.

Dolby Atmos Update from Adam: Now that I am equipped for Dolby Atmos at home, I re-watched this. While the movie didn't get any better, the sound became more immersive for certain scenes. The battle in Chicago where Jupiter and Caine Wise are ambushed really played out overhead thanks to the Dolby Atmos mix.

When the disc is first played, the viewer is greeted with the following promos presented in high definition video:

Jupiter Ascending: Genetically Spliced (10:25) covers the film’s conception of the genetically spliced characters in the film as well as the practical and digital ways in which they were realized. Comments are provided by Pigott-Smith, Bean, Woodhead, Glass, Tatum, Hogg, Barrett, Ariyon Bakare (“Greeghan”), Cooke, and Middleton,

From Earth to Jupiter (and Everywhere in Between) (9:34) centers around the universe building efforts of the Wachowskis and the perspectives of their collaborators on it. Comments are provided by Kunis, Hogg, Bean, Pigott-Smith, D’Arcy, Andy Wachowski, Kennedy, Bakare, Gurry, Glass, Middleton, Booth, Tatum, Redmayne, Hogg, and Lana Wachowski.

SD DVD This 3-disc combo pack also includes an SD DVD of the film which is presented in it 16:9 enhanced standard definition video with 384 kbps Dolby Digital 5.1 tracks in English, English DVS, French, and Spanish with available subtitles in English SDH, French, Spanish.

When the SD DVD is first played, the viewer is greeted with the following series of skippable promos:

Special Features on the DVD include two of the featurettes also available on the Blu-ray: "Jupiter Jones: Destiny is Within Us" and "Jupiter Ascending: Genetically Spliced".

Andy and Lana Wachowski's Jupiter Ascending is hampered by a frustratingly passive protagonist and filled to the brim with big ideas and concepts to which it fails to do justice. While it is punctuated by a handful of impressively staged sequences, there is not quite enough jaw-dropping to justify all of the head scratching. The Blu-ray presentations have top-notch video and audio, both in 2D and converted 3D incarnations. Extras consist of a series of featurettes that have a lot of standard electronic press kit mutual praise talking heads with occasional glimpses behind the scenes of the production.

As much as I love to support HTF by buying through their links, this title will have to be under $10 before I'll even consider it.

It was a great popcorn movie. Lots of action and great effects with plot holes you could drive a truck through, but not as bad as people made it out to be.

I re-watched this weekend now that I have Dolby Atmos at home, and updated the review with my thoughts.
You must log in or register to reply here.

Yesterday at 9:41 AM
Colin Jacobson