300: Rise of an Empire Blu-ray Review

Meanwhile, in the rest of ancient Greece... Noam Murro's prequel/paralleloquel/sequel to Zack Snyder's 300 expands the scope of events to encompass a larger cross-section of the Greco-Persian theater of war circa 540 BC. The film features plenty of stylized blood and guts action and a novel female antagonist in Persian naval commander Artemesia. Is it enough to make it a fresh take or does it descend into the realm of rehash? Read on and find out... 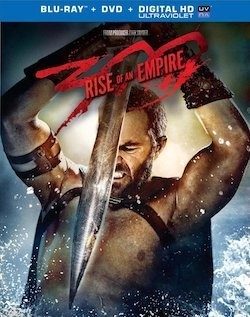 300: Rise of an EmpireDirected by: Noam MurroStarring: Sullivan Stapleton, Eva Green, Lena Headey, Hans Matheson, Rodrigo Santoro300: Rise of an Empire follows lukewarm on the heels of 2006's 300, expanding the story to encompass Greco-Persian war events occurring before, during, and after the battle of Thermopylae. The bulk of the film follows Athenian warrior and politician Themistokles (Stapleton) in his efforts to contend with the Persian invasion led by Xerxes (Santoro) and Artemisia (Green) and rally support from greater Greece. The film also finds time to expand on the origins of the god-like Xerxes and depict how Queen Gorgo (Headey) and rest of Sparta respond to the news of the (1.5 millennia spoiler alert) deaths of King Leonidas and his 300 Spartans.Zack Snyder's 300 effectively adapted the stylized visuals and larger than life action of Frank Miller and Lynn Varley's 1998 graphic novel into a widescreen spectacle. That film featured an underrated performance by Gerard Butler who infused the character of Leonidas with just enough humanity and wit to anchor the over the top action to something audiences could care about. Noam Murro's sequel has no such character. Sullivan Stapleton's Themistokles comes across as a fairly generic protagonist that could have been flown in from almost any other sword and sandal epic. Eva Green's Artemisia is quite a bit more entertaining to watch, primarily because the actress recognizes the film she is in and goes all-in for campy digital scenery chewing fun.Aside from Green, the actors who fare best are the holdovers from the first film who are mostly cashing in on good will earned eight years ago. Lena Headey's Queen Gorgo provides narration at various points throughout the film comparable to how Dilios was used in the first film. One would think that adding a narrator would negate any need to saddle characters with bland exposition, and yet its seems like 75% or more of the dialog in the film is purely functional with characters explaining what has happened and what is about to happen to other characters.Undemanding viewers looking for over-the top, heavily stylized action sequences may enjoy the film which includes some sea battles that are different enough from the battles in the first film to not seem like a pale retread. Viewers looking for a completely ridiculous gratuitous hate-sex scene? They have you covered as well. Otherwise, viewers would be better served steering clear altogether or simply re-watching the first film once every eight years.

300: Rise of an Empire Playlist

The 1080p AVC encoded visual rendering of the film is modern digital perfection. Despite the heavy stylization and digital contrast manipulation, there is nary a trace of digital video artifacts anywhere to be seen. The degree of manipulation and stylization, though heavy, is somewhat reduced compared to the original 300 film, which pushed for a fair cinematic approximation of the crimson and sepia tinted Frank Miller/Lynn Varley art from the source graphic novel. There are a lot more deep focus shots, probably due to its origination as a digital production intended for 3D conversion, and more emphasis on blues and blacks in the palette of ...Rise of an Empire. While not quite as aesthetically daring as its predecessor, 300: Rise of an Empire will capably show off the full resolution of a viewer's 1080p high definition display.

The DTS-HD MA 7.1 audio presentation (which, full disclosure, was evaluated by me on a 5.1 surround system) is an impressively dynamic and three dimensional mix, especially during the battle sequences which make up a large percentage of the film's running time. While there is a slight lack of refinement to the musical fidelity that keeps it just short of the best modern cinematic mixes on home video, this soundtrack will give an impressive workout to a viewer's surround sound set-up. Alternate Dolby Digital 5.1 surround tracks are selectable in French, Spanish, and Portuguese.

When the disc is first played, the viewer is greeted by the following skippable promos:Proper extras consist of the following featurettes, all presented in 1080p video with Dolby Digital 2.0 stereo audio:Behind the Scenes: The 300 Effect consists of a collection of four featurettes presented with no "play all" option:Featurette: Real Leaders & Legends (22:52) delves into the historical basis for the film. Discussion of historian Herodotus and the relationships between ancient Persia and Greece. Comments are provided by Hughes, Military Historian Victor Davis Hanson, Zack Snyder, Johnstad, Deborah Snyder, Iliopoulos, Naval Historian Boris Rankov, and Greek Model & Actor Kostas Sommer.Featurette: Women Warriors (12:23) looks at the characters of Artemesia and Gorgo as portrayed in the film as well as their historical origins. It includes discussion of the life and perceptions of women in Ancient Greece and Persia, and overlaps quite a bit with material in the “Real Leaders and Legends” featurette. INterview comments are provided by Hanson, Coller, Headey, Green, Hughes, Canton, Tull, Nunnari, and Deborah Snyder.Featurette: Savage Warships (10:37) covers the design of the trireme warships in the film as well as their historical basis. Comments are provided by Tatopoulos, Nunnari, Canton, Goldmann, Rankov, Hanson, Trireme Trust member Vassilis Dovas, Hirota, and HughesBehind the Scenes: Becoming a Warrior (4:39) looks at the intense physical training the actors went through for the film. Comments are provided by Murro, Lead Fitness Trainer Mark Twight, Deborah Snyder, Santoro, Headey, Zack Snyder, Canton, Nunnari, Hans Matheson (“Aeskylos”), Pleavin, Green, Goldmann, Tull, and Mulvey,SD DVDThis two-disc Combo edition of 300: Rise of an Empire also includes a standard definition DVD of the film. It is presented with 5.1 surround sound tracks in English, French and Spanish, with available subtitles in English SDH, French, and Spanish. There are no special features on this SD DVD, but when the disc is first played, the viewer is greeted with the following series of promos:Ultraviolet Digital CopyAn insert in the packaging includes a code to unlock a high definition Ultraviolet Digital Copy of the movie. Using the code to redeem the digital copy allows the viewer to access high definition streaming versions of the movie on portable devices, smart TVs, and set-top boxes connected to streaming services such as Flixster, Vudu, CinemaNow, Target Ticket, and M-Go.

Fans of the 2006 300 film will get some additional gruesomely stylized violence, but aside from an entertaining, digital-scenery-chewing-bordering-on-camp performance from Eva Green as Artemisia, 300: Rise of an Empire has little to offer beyond what a second viewing of the far superior original would provide. Viewers who did not like the original will almost certainly like this even less. The presentation on disc has nearly flawless video and audio, and a modest set of extras, the best of which delve into the historic events being dramatized (with great license) in the film.

Big fan of Eva Green, so might make this a rental (or wait until it's on Netflix streaming). First one, to me, was only rental worthy (though I bought the HD DVD at the low price of 1.99$, far less than rental price at the time, so if this one dips to the 5$ or so range at some point, I might add it for the sake of completeness).

I watched this in 3-D during its theatrical run. I have no need to buy the BD as I'm not interested in seeing it again.

"That film featured an underrated performance by Gerard Butler who infused the character of Leonidas with just enough humanity and wit to anchor the over the top action to something audiences could care about. Noam Murro's sequel has no such character. Sullivan Stapleton's Themistokles comes across as a fairly generic protagonist that could have been flown in from almost any other sword and sandal epic. Eva Green's Artemisia is quite a bit more entertaining to watch, primarily because the actress recognizes the film she is in and goes all-in for campy digital scenery chewing fun."

This to me is the major problem with this film. Green is the best and probably most fleshed out character and Xerxes remains interesting but the rest are cardboard cutouts that leave you cold to the proceedings. The actors in the first film were superior to what we get in this film...not just Butler, who was the perfect anchor, but the rest of the cast as well. Yes, it is visually covering the same ground with the expansion of the battle at sea and it is enjoyable at this level but sorely misses the personality 300 had. As most sequels do it falls far short of the original.
You must log in or register to reply here.