Melissa McCarthy's skyrocketing popularity thanks to standout performances in box office hits Bridesmaids, The Heat, and Identity Thief landed her enough clout in 2014 that she could co-write, produce and star in her own wide release feature film, Tammy. Co-written and directed by McCarthy's husband, Ben Falcone, the film places McCarthy in a fairly conventional road trip scenario, pairs her with Susan Sarandon as her feisty alcoholic grandmother, and surrounds them both with a supporting cast of comedy ringers against which they can riff/improvise. 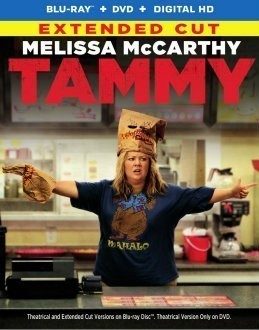 Melissa McCarthy stars as Tammy who hits a deer with her Corolla, gets fired from her fast food job, and discovers that her husband Greg (Faxon) is having an affair with her neighbor Missy (Collette) before she is even out of the movie's first reel. Despondent, she packs up her belongings and heads for her mother's (Janney) house down the street. Tammy's plans to skip town in her Grandmother Pearl's (Sarandon) car are thrown for a loop when Pearl insists she take her along as well. Thank's to alcohol, pills, and a lifetime of questionable decisions, Pearl is carrying almost as much personal baggage as Tammy, making their planned trip to Niagara Falls a challenge of much more than distance.

Howard Hawks once said that a good movie consists of at least three great scene and no bad ones. Tammy has one great scene (involving the robbery of a fast food joint), and it does not have any really bad ones, either. That may not fully meet the criteria, but it is still good for a few laughs.

McCarthy is a skilled comedienne who can milk humor out of almost any premise or situation and Sarandon is a more than capable comic foil for her (although her being cast as McCarthy's grandmother and Janney's mother strains credulity) . The supporting cast is peppered with a dream team of character actors inclusive of Kathy Bates as Cousin Lenore, Gary Cole as Bobby, a heavy drinking barfly who strikes up a hot and heavy relationship with Pearl, and Dan Aykroyd as Tammy's father Don. The skills of these actors, along with comedy ringers like Mark Duplass and Sarah Baker keep the film dependably funny, but the flimsy premise and lack of narrative direction (paralleling the journey depicted in the film), prevents it from ever approaching greatness.

The film is presented via an AVC-encoded 1080p presentation that approximates the original theatrical aspect ratio by filling the entire 16:9 frame. The film's rather plain cinematography is rendered faithfully on disc with excellent detail. Film grain is subtle, but apparent and intact.

The film's original English language audio is conveyed via a lossless DTS-HD MA 5.1 track. The surround and LFE field are used sparingly and creatively for music and very particular effects. Dialog is occasionally a bit compressed sounding, likely due to the technical challenges of capturing dialog live in various location settings, which allowed for the cast to improvise freely.

When the disc is first played, the viewer is greeted the following promos:Proper extras accessible from the disc's Special Features menu include:
Tammy’s Road Trip Checklist (4:28) in which Writer/Producer Melissa McCarthy (“Tammy”) and Director/Producer Ben Falcone discuss the possibly over ambitious road trip they took with their young children after the making of the film while offering semi-tongue in cheek travel tips. Their interview is preceded by brief comments about real-life road trips taken by Kathy Bates (”Lenore”) and Susan Sarandon (”Pearl”).

Gag Reel (3:22) is a modestly amusing collection of dialog flubs and prop issues caught on camera during the making of the film.

Delete Scenes (4:49 w/”play all”) includes a collection of four deleted and/or alternate scenes that did not appear in the theatrical or extended editions of the film.Under the sub-menu of Fun Extras are the following three collections of alternate takes:this Blu-ray combo pack comes packaged with a SD DVD that contains the theatrical cut of the film in standard definition 16:9 enhanced video with available Dolby Digital 5.1 tracks in English, French, and Spanish and available subtitles in English SDH, French, and Spanish.

When the SD DVD is first played, the viewer is greeted with the following series of skippable promos:The only proper extra on the SD DVD is the Gag Reel also present on the Blu-ray.

Tammy is a sporadically funny road trip comedy with a plot so thin that it plays like little more than an episodic series of sketches. Fans of Melissa McCarthy and Susan Sarandon may enjoy watching them riffing off of each other and the talented supporting cast, but it ultimately does not do justice to the level of talent involved. It is presented on Blu-ray with a solid visual presentation and a lossless audio track marred only by occasional harsh sounding dialog. Extras are modestly entertaining but lack substance. In addition to the theatrical version of the film, this disc includes an extended edition that adds three minutes to the running time without any significant improvements or detriments.

I watched this and personally I am outraged that they butchered it. I don't recall seeing Debbie Reynolds once.

Kidding aside, Debbie Reynolds would have been a more plausible choice to play the role of Pearl. Now if only Leslie Nielsen were alive to play the Gary Cole role...

For those interested in such things, I redeemed the Ultraviolet digital copy through Vudu, and it added it to my libray as an "HD" copy (not "HDX").

That was the first time I have experienced that with an Ultraviolet HD redemption.