Into the Storm Blu-ray Review

Into the Storm is a tornado disaster action and effects spectacle refreshingly devoid of sharks. Director Steven Quale cut his teeth shooting second unit for James Cameron, so he definitely knows his way around a wind machine and elaborate action effects sequences. While the film did not create a whirlwind of box office like its most obvious precedent, 1996's Twister, it does, by comparison, illustrate what has become possible with advancements in special effects technology over the last 18 years. 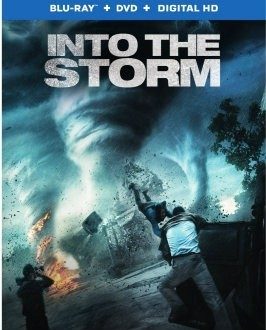 Into the Storm (2014)Directed by: Steven QualeStarring: Richard Armitage, Sarah Wayne Callies, Matt Walsh, Max Deacon, Nathan Kress, Alycia Debnam Carey, Arlen Escarpeta, Kyle Davis, and Jon Reep, Into the Storm follows a group of characters in and around the central United States town of Silverton over the course of several hours during a havoc wreaking super storm. Converging around the natural disaster are a group of storm chasers led by Pete (Walsh) and Allison (Callies) who hope to place their armored and instrumented vehicle “The Titus” directly in the path of a tornado, a single father, Gary (Armitage), who is the vice principal of the local high school, Gary’s teenage sons Donnie (Deacon) and Trey (Kress), Donnie’s secret crush Kaitlyn (Carey), and a couple of rednecks dreaming of viral video stardom named Reevis (Reep) and Donk (Davis).Into the Storm aims to one-up the 1996 tornado disaster film Twister by bringing the effects and production standards up to 21st century standards. Despite the fact that it did not come near the level of box office success of its predecessor, I actually think Into the Storm is a better film. Of course, calling a two-and-a-half star film better than a two star film is hardly a ringing endorsement, but if I had to watch one of them again, I would definitely prefer the one that involves storm chasers, teens in peril, and their concerned father over the one where rival teams of storm chasers compete with each other as if they were petulant teenagers.One way in which Into the Storm attempts to separate itself from its predecessors is via applying a found footage aesthetic. This requires the first act of the film to go out of its way to establish why every group of characters has a high definition video camera rolling at all times. In terms of shot selection, the filmmakers' commitment to veracity within the found footage aesthetic goes in and out like Richard Armitage's accent. A hybrid approach in which frequent shots from the point of view of the cameras on the tank-like storm chasing vehicle Titus were mixed with more conventional cinematography could have been just as effective without the distraction of viewers (or possibly just mildly obsessive compulsive reviewers) assessing the plausibility of every camera angle.Capable actors in the cast such as Matt Walsh, Sarah Wayne Callies, and Richard Armitage are saddled with dialog that aspires to be little more than functional. Character details such as Pete's Ahab-like obsession with capturing footage and data from inside of a tornado, Allison's desire to reunite with her daughter, Gary's frustrated disconnection from his teenage sons, and Donnie's awkward crush on Kaitlyn, are drawn broadly and without even a hint of nuance. The best actors in the film manage to promote their characters from stereotypes to archetypes, but never do much better than that.That being said, the film's marketing campaign promised little more than action-effects spectacle, and it manages to deliver that in spades for over half of its compact hour and a half running time.

Into the Storm Playlist

The cinematographic conceit of this film is that it consists of "found footage" shot by the characters as it is happening. The variety of digital video styles are rendered accurately by the AVC-encode 1080p encoding on Blu-ray. In reality, with the exception of some point of view GoPro shots, most of it looks better than consumer digital video (the lighting is way better, for instance), and a good chunk of it is actually shot with feature film quality camera systems such as Arri Alexa and Red Epic. The result is a variable appearance that is consistent with the aesthetic intent of the filmmakers.

The DTS-HD MA encoded 5.1 audio mix is the highlight of the film as presented on disc. The mix makes aggressive and imaginative use of all 5.1 channels to immerse the viewer in a maelstrom of sound and buffer them with thunderous LFE. Despite the aggressive effects and music score, the mix remains well balanced throughout with clear and natural sounding dialog. Alternate Dolby Digital 5.1 tracks are available dubbed in French, Spanish, and Portuguese.

Like most films in the natural disaster genre, Into the Storm pays only rudimentary attention to plot and character, but it does deliver on the promised action and effects spectacle. It is presented on Blu-ray with video quality limited only by the film's found footage aesthetic, reference quality audio that puts viewers in the center of the mayhem, and a modest collection of extras featuring information about both the film's production and real life storm chasing.

Yet another film not Dolby atmos on bluray. How much is everyone spent so far on atmos avr's?