Johnny Angel is an entertaining RKO film noir which has been released on DVD-R by the Warner Archive. It features a hard-nosed performance by George Raft and some striking cinematography by Harry J. Wild, who photographed such notable examples of film noir as Murder, My Sweet, Cornered, Pitfall, and The Big Steal. 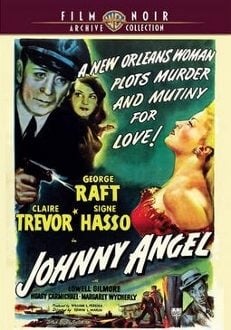 Johnny Angel (George Raft) is the captain of a freighter in the Gulf of Mexico. While sailing slowly through a thick fog he receives an alert that another ship has been sighted ahead. The other ship is floating aimlessly and no one is visible on its deck. When Angel brings his ship to a full stop he realizes that the seemingly abandoned ship is the S.S. Emmaline Quincy out of New Orleans, and its captain is Johnny Angel's father.

Angel goes aboard the stricken ship and finds is to be deserted. There are signs of a struggle, but no one, either alive or dead, is to be found. Angel gives an order that a salvage crew be put aboard and they will take the ship to New Orleans. Upon arriving in port Angel proceeds to the offices of the Gustafson Line, the shipping company which employs both Angel and his father. Angel is intent upon questioning his boss, George "Gusty" Gustafson (Marvin Miller), who is busy chastising his beautiful wife, Lilah (Claire Trevor), because she has been spending time at a nightclub where she used to be a singer. Also in the office is Miss Drumm (Margaret Wycherly), an older woman who once was Gustafson's nursemaid and is now the secretary-treasurer of the business. Lilah expresses considerable pleasure in seeing Angel, which suggests that they have a history.

Gustafson claims to know nothing about what happened to the ship or Angel's father, and an investigation is just now underway. Angel is given permission by the Harbor Master to do his own investigating, so he goes aboard the Emmaline Quincy to look around some more. In one of the cabins he discovers a French newspaper and a woman's shoe. He questions the night watchman on the dock, who says that he has not seen anyone leave the ship, but he did see a woman walking on the dock who was wearing a raincoat and a funny-looking hat. Angel figures that a French woman would probably head to the French Quarter, and he hires a cab driver, Celestial O'Brien (Hoagy Carmichael), to drive him to all of the clubs. He eventually makes his way to Café Larue, where he spots a woman, Paulette Girard (Signe Hasso), who is wearing a raincoat and a beret. Angel becomes convinced that Paulette knows what happened aboard his father's ship, but she is not talking.

Johnny Angel contains many of the signature elements of film noir, including moody, evocative shots of threatening back streets in New Orleans while Angel follows his leads wherever his suspicions take him. George Raft gives an intense performance as the tightly wound Angel, who is dogged in his pursuit of the truth. Claire Trevor is excellent as the femme fatale who married for money but now wants more out of life. Signe Hasso is believable and sympathetic as Paulette, who had no idea what she was getting into when she obtained passage on the doomed ship. Hoagy Carmichael gives a quirky, enjoyable portrayal as the cab driver, and Martin Miller does a fine job of playing a seemingly successful businessman who is saddled with a self-centered, difficult to please wife and an overbearing mother figure in Miss Drumm.

Director Edwin L. Marin, who was best-known for the westerns he made with Randolph Scott, keeps the action moving along at a brisk pace. My only complaint is that he tips his hand about how the climactic scene is going to play out. Johnny Angel is a notch below the best film noir, but fans of the genre will not be disappointed by it.

The 1.37:1 black and white image is generally pleasing, showing good contrast, nice black levels and good shadow detail. There are specks here and there and some age-related damage is evident, but those are minor distractions which did not take me out of the film. Sharpness is excellent throughout, except for a few shots which were intended to be in softer focus.

The Dolby Digital mono audio is unexceptional but fine. Every word of dialogue is clear and understandable, and there is no evidence of anomalies such as hiss, clicks, or flutter to interfere with your enjoyment.

There are no extras on this Warner Archive release.

Johnny Angel is a welcome addition to the growing number of film noir titles which are available on home video. This review gives me an opportunity to point out that Warner has yet to release the 1949 film noir Beyond the Forest, which stars Bette Davis and Joseph Cotten. Beyond the Forest is the film where Bette utters her immortal line, "What a dump!"

Thanks for the review. I'll be buying this disc.

Nice review Richard. Beyond the Forest cannot be released due to rights issues.

JoelA said:
Nice review Richard. Beyond the Forest cannot be released due to rights issues.
Click to expand...

Thanks. I'm sorry to hear that.
You must log in or register to reply here.