The succession of artistic and financial disappointments for actor Johnny Depp continues almost unchecked (Into the Woods was a hit, but he was hardly a major player in it) with David Koepp’s Mortdecai. A labor of love for the star who had wanted to resurrect the kind of Pink Panther farcical adventure film with an eccentric leading character, Mortdecai falls short in almost every conceivable way including wasting most of a very able and well-known slate of leading actors and presenting a rather humdrum caper puzzle for our silly protagonist to untangle. 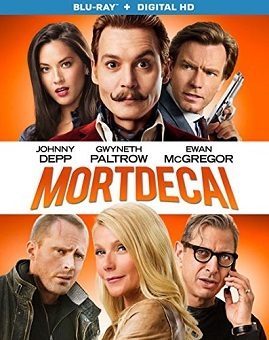 International art dealer Lord Charlie Mortdecai (Johnny Depp) learns of the existence of a priceless, recently discovered Goya painting which is doubly valuable due to an alleged number of a secret bank account containing Nazi gold scratched on the back of the canvas. Because the eccentric lord owes the British government £8 million, Inspector Martland of MI5 (Ewan McGregor) insists Mortdecai play the instrumental role in recovering this highly sought-after painting (on England’s dime, of course, since he’s penniless). His travels take him from London to Moscow to Los Angeles on his quest, aided by his trusted manservant and bodyguard Jock (Paul Bettany) while a litany of international crooks including Emil Strago (Jonny Pasvolsky), Russian mobster Romanov (Ulrich Thomsen), and conceited American Krampf (Jeff Goldblum) try to stand in his way and claim the painting for themselves.

Eric Aronson’s screenplay is based on the novel Don't Point That Thing at Me by Kyril Bonfiglioli, but not being familiar with the book, one can only surmise that it reads funnier on the page than it plays on the stage. The script is filled with running gags: Mortdecai’s pride over his handsome new handlebar mustache which makes his wife (Gwyneth Paltrow) literally gag when she gets near it, Mortdecai’s continual accidental injury to his servant Jock (who still seems able to function normally despite several gunshots and being hit several time by a car), Jock’s continual sexual prowess with the ladies, Mortdecai’s complete lack of athletic expertise: none of them apart from a couple of sight gags with Jock’s accidents at the hands of his employer are the least bit funny. In fact, Depp’s eccentric character at the center of the action is painfully and desperately unfunny as if he’s trying so hard to be weird that it’s just irritating. The script pays no attention to its own playbook: the Mortdecais are broke, but wife Johanna has no trouble jetting around the globe (her husband is on England’s expense account; she isn’t), and director David Koepp hasn’t done anything to make these various locations seem real or in fact necessary to the story. This kind of slapstick mayhem worked wonderfully in Blake Edwards’ Pink Panther series because Edwards knew how to set-up humorous situations and then build comic predicaments which would top and then top again what had gone before. Koepp doesn’t do this, so he has wild scenes of runaway fires or projectile vomiting just thrown willy-nilly into the story to end scenes in chaos.

Johnny Depp seems to be channeling Terry-Thomas for the inspiration for his Charlie Mortdecai, but this kind of buffoonish British twit is simply cartoonish and never advances in personality from the beginning of the film until the end. Gwyneth Paltrow and Ewan McGregor play their standard wife and inspector roles rather predictably and without any comic nuance (there's yet another running gag about his long-held torch for her, but it goes nowhere). Paul Bettany, on the other hand, walks away with the picture in his back pocket as the faithful servant, tough with the bad guys and irresistible to the ladies, making one wish the movie had been about him rather than his master. Olivia Munn is wasted as an American nymphomaniac out to beguile Charlie in order to allow her confederates to steal the artwork while Jeff Goldblum has a choice moment or two but is quickly sidelined by his character’s (brief) role in the plot.

The film’s 2.40:1 theatrical aspect ratio is faithfully delivered in a 1080p transfer using the AVC codec. Sharpness is excellent from beginning to end, and color is nicely delivered with believable and appealing skin tones. More inconsistent, however, are black levels and the use of contrast which occasionally seems overly cloudy for no good reason. The movie has been divided into 16 chapters.

The DTS-HD Master Audio 7.1 sound mix does not utilize this broad soundstage to its fullest extent. Although the music score by Mark Ronson and Geoff Zanelli gets the full expanse of the fronts and rears, split effects for this busy slapstick action comedy don’t provide that unmistakable sense of immersion that the best sound mixes achieve. Dialogue has been expertly recorded and has been placed in the center channel.

Stolen Moments: On the Set of Mortdecai (16:34, HD): stars Johnny Depp, Gwyneth Paltrow, Ewan McGregor, Paul Bettany, Jonny Pasvolsky, and Olivia Munn offer comments on their roles in the farcical goings-on and their difficulty of playing the humor without breaking up themselves during takes. Behind-the-scenes footage from production is also shown.

The Art of Noise: Making Music for Mortdecai (12:25, HD): composer Geoff Zanelli discusses how he and co-composer Mark Ronson worked together to provide the background music for the film (what he calls “aristo-funk”). He also discusses the thrill of recording at London’s famous Abbey Road Studio with some brief clips seeing the orchestra recording for the movie.

Theatrical Trailers (HD): a teaser trailer (1:23) and a theatrical trailer (2:33) are provided individually.

Mortdecai is trying so desperately to be funny that it falls completely flat most of the time. Combined with a flimsy caper plot that isn’t fully worked out satisfactorily, the movie is insipid rather than inspired. The Blu-ray release, however, looks and sounds wonderful for fans of the stars who might be interested in a rental.

Deep down Johnny Depp is really talented. Hopefully, one day he'll again choose a project that can reflect that.

Depp needs to get an agent or a new agent, or a better agent.
You must log in or register to reply here.