Race relations has always been a touchy subject, and for a major studio to adapt the same source material (Fannie Hurst’s 1933 novel, Imitation of Life) in 1934 and then again in 1959, and do it with class, is rare indeed. Universal has “digitally remastered and fully restored” both films “from high resolution 35mm original film elements,” and while the results may not be breathtaking, they are commendable. 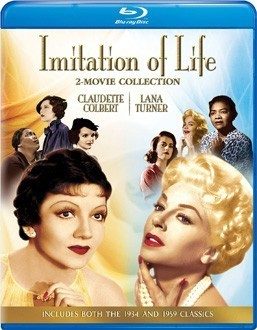 As noted above, Universal adapted Fannie Hurst’s 1933 best selling novel for the big screen twice. The first film, released in 1934 and directed by John M. Stahl, is perhaps a more faithful adaptation of the book, following Bea (Claudette Colbert), a young widow trying to make ends meet by taking over her husband’s door to door maple syrup business while trying to raise her daughter. One morning, Delilah (Louise Beavers) arrives at Bea’s house, responding to a classified ad for a housekeeper at a similar address. As Bea is about to send Delilah to the correct address, Bea’s daughter Jessie falls into the bathtub. While Bea is tending to Jessie, Delilah makes breakfast for the single family. The two women quickly become friends, and Delilah offers, in exchange for room and board for her and her light-colored daugher Peola, to be Bea’s housekeeper. Several weeks later, after tasting Delilah’s pancakes, Bea gets the idea to open a pancake shop on the Boardwalk, with Delilah cooking the pancakes and Bea providing the maple syrup. Meanwhile, the young girls become friends, and as they grow up, Peola (Freddi Washington) is often mistaken for being white due to her light complexion, and begins to feel that her mother’s black heritage is holding her back, causing her to be expelled from several prominent white schools and colleges. Meanwhile, the restaurant is taking off, thanks to the help of Elmer Smith (Ned Sparks), who provides Bea with the idea to market the pancake flour and sell it in grocery stores, allowing Bea and Delilah to live comfortably in a mansion in the city. This causing more of a rift between Peola and Delilah, with Peola running away and trying to live on her own, keeping her past to herself. It’s not until Delilah passes away from a broken heart that Peola realizes how much she loved her mother. Some may have issues with how Delilah is portrayed as a stereotypical Aunt Jemima-type, but that was par for the course in the 1930s. Where the film excels (particularly for the time in which the movie was made) is the relationship between Delilah and Peola, and how Peola is treated until her mother inadvertently reveals the young girl’s heritage, such as when she shows up to school to bring Peola a raincoat and boots during a rainstorm. The 1934 adaptation of Imitation of Life was nominated for three Academy Awards, including Best Picture, and was inducted into the National Film Registry in 2005,

Twenty-five years later, Universal dusted off Fannie Hurst’s novel, and hired Eleanore Griffin (Boys Town) and Allan Scott (Top Hat) to update the story with director Douglas Sirk (Magnificent Obsession). The result is more of a soap opera that is very loosely based on the original novel. The film opens with a chance meeting between struggling actress Lora Meredith (Lana Turner) and her daughter Susie with Annie Johnson (Juanita Moore) and her light-colored daughter Sarah Jane on the beach at Coney Island. Annie reveals to Lora that the two of them are practically homeless, and she takes them in. While at the beach, Lora meets photographer Steve Archer (John Gavin), who tries to romance Lora, but becomes more of a fifth wheel as Lora uses her looks to attract playwright David Edwards (Dan O’Herlihy), who begins casting her in several Broadway hits. As the years progress, Lora and Susie (now played by Sandra Dee) become distant due to Lora’s determination as an actress taking up most of her time, while the distance between Annie and Sarah Jane (Susan Kohner) is caused by Sarah Jane’s reluctance to being reminded that she is of African-American descent. What is lacking in the 1959 version is any kind of relationship between Lora and Annie, as we never really see them become friends, and the relationship plays out more like a business arrangement with Annie playing servant to Lora. The film also seems to spend a lot more time focusing on Lora’s career as an actress than on the unravelling relationship between Annie and Sarah Jane. The film was nominated for two Academy Awards, Best Actress in a Supporting Role (Susan Kohner and Juanita Moore).

Universal’s track record of bringing classic films to Blu-ray has been a rocky one, at best, and I’m happy to say that this is one of their better achievements. Both films have been compressed using the AVC codec. The 1934 version retains the original aspect ratio of 1.33:1, with excellent contrast and detail, particularly for a black and white film of this vintage. Digital manipulation is minimal, allowing the transfer to retain its film grain structure throughout yet provide a fairly clean-looking image free of dirt, debris, and scratches.

The 1959 version is presented in a 2:1 aspect ratio rather than its intended 1.85:1. Colors are consistent and vibrant without being over-saturated, contrast is also excellent. Detail is quite good, although there are some shots that appear soft, but that may be intentional rather than a flaw in the transfer. As with the 1934 version, digital manipulation is minimal, allowing the transfer to retain its film grain structure throughout yet provide a fairly clean-looking image free of dirt, debris, and scratches.

Both versions are presented in DTS-HD Master Audio 2.0 mono, and are generally free of pops, clicks, and hiss (although, given its age, the 1934 version does have some very minor instances if you really listen for them). Dialogue is clear and consistent throughout.

When the disc is loaded, a main menu appears, asking the viewer to choose either the 1934 or 1959 version. The bonus features (which have been ported over from the previous DVD release) can only be accessed using the pop-up menu while each film is playing.

1934 version
Audio Commentary with African-American Cultural Scholar Avery Clayton: Clayton discusses the film’s importance both in the history of American film and society, and the many themes it attempts to tackle.

1959 version
Audio Commentary with Film Historian Foster Hirsch: Hirsch is head over heels in love with this film, which sometimes gets in the way of his conversation on the film. He does provide some interesting tidbits on how the film was made, some of the subliminal messages Sirk used, and conversations Hirsch has had over the years with Moore and Kohner.

Lasting Legacy: An Imitation of Life (480i; 31:40): This featurette looks at both films, using interviews with film historians, including Foster Hirsch, Avery Clayton, and others. It would have been nice if this featurette could have been accessed from either film, though.

Universal has done a fine job by bringing these two classic films, on one disc, with new transfers that outshine previous efforts, while retaining the special features. Owners of the 2008 DVD will likely want to upgrade.

Thanks for the review Todd. I bought the DVD set just a couple of months prior to the Blu-ray restoration announcement and was impressed and moved by both versions of the film.
For a change, I'll exercise some restraint and not rush in to upgrade to Blu, although there's no question I'll get there in the end! It sounds like a worthwhile uptick in quality.

Too bad the Sirk remake is in the wrong aspect ratio. The DVD is correct; why is the BD wrong? Mind boggling.

bujaki said:
Too bad the Sirk remake is in the wrong aspect ratio. The DVD is correct; why is the BD wrong? Mind boggling.
Click to expand...

A lot of the UI films of the 1950s have been released in 2.0 AR lately. I just picked up a Spanish DVD copy of Audie Murphy's Destry and it is 2.0. It looks very nice otherwise. The German BD of Monolith Monsters is 2.0 also. Maybe Bob Furmanek can comment.
You must log in or register to reply here.