Director Angelina Jolie’s Unbroken attempts to tell the life story of Louis Zamperini, an Olympic athlete who was captured and held prisoner by the Japanese during World War II. The result is a well-made film with a more than capable cast, but fails to deliver on its promise of a story of a man’s transformation to find forgiveness and redemption. 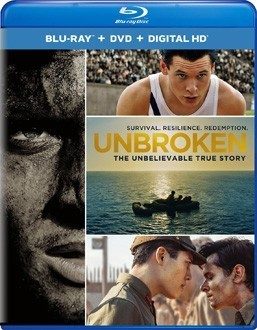 Unbroken opens as a B-24 Liberator prepares for a bombing run in the Pacific during World War II. We meet the pilot Phil (Domhnall Gleeson), co-pilot Cup (Jai Courtney), and the rest of the crew, including bombardier Louis Zamperini (Jack O’Connell). They quickly come under attack by Japanese squadrons, and during the battle Louis flashes back to his pre-teen years, first to a church sermon on forgiveness, then as a juvenile delinquent (C.J. Valleroy), getting into fights with other boys in the neighborhood, sneaking off to drink moonshine under the bleachers at the school stadium, and trying to evade capture by the local beat cops by running away on foot. His incredible speed as a distance runner catches the eye of his older brother, Pete (John D’Leo as the younger version, Alex Russell as the older), who encourages Louis to try out for the track team at Torrance High School. That eventually leads him to the Berlin Summer Olympics in 1936, and although he did not place in his event, the 5,000 meter run, his final lap of 56 seconds did break a record. The film the flash forwards back to the present, where the plane crash lands back at the base after a successful bombing run.

The Air Force sends the troop back out on a rescue mission to find a lost and presumed downed plane, but this flight is not so lucky. They are shot down in the middle of the Pacific, with only Louis, Phil, and Mac (Finn Wittrock) surviving, finding themselves stranded in two lifeboats for nearly 50 days, living off of rainwater and raw fish (although Mac only survives the first 29 after being shot at by a Japanese plane). Louis and Phil are eventually captured days later by the Japanese, and transferred to a POW camp run by Watanabe, aka “The Bird” (Takamasa Ishihara). Watanabe is a well-educated young man, speaking fluent English, a sadistic bully who revels in torturing Louis, so much so that after Louis refuses to cooperate with the Japanese government and publicly lie about his treatment at the POW camp, Watanabe forces each of the prisoners to punch Louis in the face, one after the other, to teach him a lesson. Things look up for Louie and the POW’s when Watanabe is promoted and transferred to another POW camp, but that changes quickly after the camp is bombed by Americans and the POWs are transferred to the coal mines, under the leadership of Watanabe, and the cruelty starts over. Eventually the war ends, the prisoners are liberated, and Luis goes home, reunited with his family. We are then told by a title card that Louis later returned to Japan to forgive his captors, carried the Olympic torch on the way to the 1998 Winter Olympics in Nagano, Japan, and passed away in 2014 before the movie was completed.

And that is the major problem with Unbroken. The screenplay by Joel and Ethan Coen (No Country for Old Men, Richard LaGravenese (The Fisher King), and William Nicholson (Gladiator) doesn’t really have a third act telling its audience how Louis Zamperini found the faith, courage, and strength to offer forgiveness to his captors (although it is well-told in one of the bonus features on this disc). Or possibly that Director Angelina Jolie decided to cut that part of the story due to length and budgetary reasons. And that is a shame, because the film is, up to that point, well told and beautifully photographed by Roger Deakins (Skyfall) and scored by Alexandre Desplat (The Imitation Game).

Roger Deakins cinematography comes across beautifully in the AVC-encoded 1080p transfer that retains the film’s intended 2.40:1 theatrical aspect ratio. Colors are consistent and never over saturated, detail is exquisite, and blacks are unbelievably deep and inky, particularly in the sequences where Louis and Phil are imprisoned in underground cells.

If I’m not mistaken, I believe this is Universal’s first Dolby ATMOS release on Blu-ray, which includes a Dolby TrueHD 7.1 core. Even when folded down to 5.1 by my Marantz SR5008 receiver (since my room is too small for 7.1), this is a near-reference quality soundtrack. The surrounds are well-used not only for atmospherics during many of the quieter passages, but immerse the listener during the battle sequences with bombers and fighter planes flying throughout the room, with LFE adding the occasional and necessary punch. Dialogue is clear and understandable, never getting drowned out by music or sound effects.

Dolby Atmos Update: I watched in Dolby Atmos using a 7.2.4 system (4 ceiling speakers). Todd mentioned how immersive it was on his 5.1 system, and it didn't disappoint in Dolby Atmos. They really used the overhead speakers without abusing them. There wasn't anything gimmicky at all, but they received a lot of activity between bombers, aerial combat, rain, storms at sea etc. I have only listened to a few Dolby Atmos Blu-ray mixes, but I this is my favorite so far based on the heavy use of the overhead channels and how well they pulled me into the film. -- Adam

Inside “Unbroken” (1080p, 27:23): Broken down into three parts, which can be played as one long featurette or each part individually, this documentary looks at the making of the film, including how Louis Zamperini’s autobiography, Devil At My Heels, was optioned by Universal in 1956, then abandoned, and renewed interest in making a film after Laura Hillenbrand published her novel, Unbroken, in 2010. It features interviews with Louis Zamperini and his family, Laura Hillenbrand, Angelina Jolie, and other members of the cast and crew.

The Real Louis Zamperini (1080p, 29:47): Interviews with Louis Zamperini and his family, along with Angelina Jolie and producer Matthew Baer, tell the life story of the subject of Unbroken, focusing on elements missing from the film.

Cast and Crew Concert Featuring Miyavi (1080p, 7:42): During some down time while making the film, Miyavi (aka Takamasa Ishihara, who played Watanabe) performed a concert for the cast and crew.

Prison Camp Theater: “Cinderella” (1080p, 6:29): Actor Luke Treadaway, who played Miller, discusses how he was entrusted to come up with the pantomime theater rendition of Cinderella that was featured in the film.

Louis’ Path to Forgiveness (1080p, 6:43): This featurette is what should have been told as part of the third act in the film, how Louis Zamperini suffered from PTSD after returning home from the war, and finding a path to forgiveness that helped him find a post-war career as a motivational speaker.

DVD Copy: The feature film, in standard definition and Dolby Digital 5.1 audio, plus trailers for Rosewater, The Man with the Iron Fists 2, Blackhat, Dragonheart 3, and Dig, plus The Real Louis Zamperini featurette.

A well-made film with good intentions that, ultimately, doesn’t pay off on its premise. The disc has spectacular audio and video, with some nice bonus features that fill in the holes left by the movie.

Todd, thanks so much for covering these releases.

For one, I had no issue with the ending of this movie.

Recovering from alcohol. Long drawn out process that takes an entire lifetime. How do you film that? Winstead was in a 90 minute movie that dealt only with alcoholism. Tacking it as a third act element...would have been tacky.

PTSD. Has any movie, yet, filmed what that is like. Want PTSD-esque...watch Diving Bell and the Butterfly. Having family members deal with disabling physical and mental issues. Can be one in the same. Diving Bell is the single best movie I can think of that delves into "the inability to express anything". Remove stroke...add debilitating PTSD.

Catholicism. Just no need to go there.

I finally had a chance to watch this in Dolby Atmos. It was a fantastic, immersive mix. This is the first Atmos Blu-ray I have watched where I didn't have a specific WOW moment, but I didn't miss that at all as there was always something happening overhead. I have watched several films at home in Dolby Atmos and this is my favorite so far. The Real Louis Zamperini documentary is not to be missed after watching the film!

I finally got my opportunity to watch this tonight. I have NOT watched the bonus features yet.


So, yes, the movie ended with me wanting a little more of what Zamperini went through after returning home.


The movie, as Todd notes, WAS beautifully told by Jolie with an A-list support group. But there were times when I thought things dragged a bit and some trims could have given her the time to illustrate a bit more the effect of these circumstances on Zamperini's life. The title card about him learning about embracing forgiveness in service to God and later meeting some of his captors in Japan really made me want to see some of that on-screen.


But it, nevertheless, is QUITE the tale and a good film.