Identity Thief maxes out its credit card on Blu-ray, offering a good presentation of a comedy that sadly fails to come together. Jason Bateman and Melissa McCarthy play an unlikely couple on the road together in a series of situations that are meant to be hilarious but mostly wind up falling flat. The supporting cast fares a little better, particularly Robert Patrick as a dangerous bounty hunter who appears to have wandered in from another movie. The Blu-ray disc offers solid picture and sound, along with a few bonus features. I suppose that Melissa McCarthy fans will want to see this, but I can’t recommend it to anyone else. 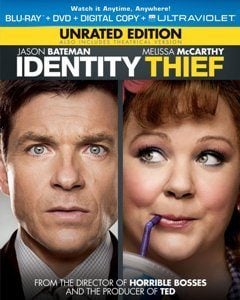 Identity Thief is presented in a 1080p AVC 2.3:1 transfer at an average 29 mbps that provides a satisfying level of detail throughout. Flesh tones are accurate, and the various wardrobe choices and looks for Melissa McCarthy are effective and distinct. (Probably the best look for the Blu-ray is the Midwestern picnic blanket shirt she wears – the HD transfer does well with the intricate pattern.) The use of CGI in the movie is subtle, but astute viewers will be able to pick up on it. (The movie was shot in Georgia, with other skylines being added onto greenscreen backgrounds, and with most of the interior driving scenes being done on a greenscreen stage.)

Identity Thief is presented in an English DTS-HD Master Audio 5.1 mix (averaging 4.4 mbps) that mostly locates the dialogue in the front channels and the pop songs in the rear channels. The subwoofer gets used here and there for car impacts, gunshots and loud music – essentially what you’d expect for a standard mix for a road comedy. The Blu-ray also includes standard 5.1 DTS mixes in Spanish and French, and an English DVS track.

The Blu-ray presentation of Identity Thief comes with a few extra features, including a quick gag reel, a few minutes of alternate takes, a pair of featurettes and a fast tour of the skiptracer’s van. Some previews are also available for recent Universal comedies. The packaging also includes the DVD release, which includes just one of the featurettes and the gag reel. A digital copy is available online via pocket BLU or via a code included in the packaging. I should note that I was unable to make any use of BD-Live with this title.Gag Reel (1080p, 0:48) (AVAILABLE BOTH ON BLU-RAY AND DVD) – This is a quick assembly of blown takes, usually involving Jason Bateman and Melissa McCarthy cracking each other up.The Making of Identity Thief (1080p, 17:04) (AVAILABLE BOTH ON BLU-RAY AND DVD) – Here we have the usual making-of featurette, loaded with the standard quick interview soundbites with the cast and creative staff and all the mutual compliments you can imagine, alongside the usual on-set video and assorted clips from the movie. Jason Bateman acknowledges that he originated the production after hearing the basic story pitch, thinking this would be a current day follow up to road movies like Midnight Run and Planes, Trains and Automobiles. The featurette includes discussion of the fact that the movie was almost completely shot in Georgia, aside from a few establishing shots grabbed in other cities. Curiously, there is no mention of the reshoots done to rebuild the movie’s ending, as Genesis Rodriguez discussed in my interview with her.Alternate Takes (1080p, 5:07) (EXCLUSIVE TO BLU-RAY) – This is a collection of alternate lines and ad-libs from what was used in the movie, along with some alternate scene opening choices. If the viewer was hoping to see multiple shots of Melissa McCarthy throwing up, this would be the place to go.Scenes Stealing: Capturing the Humor of Identity Thief (7:35, 1080p) (EXCLUSIVE TO BLU-RAY) – This short featurette continues the basic meme of the other one, although it focuses a bit more on the notion that Jason Bateman and Melissa McCarthy were having a great time on set. Bateman’s skill as a straight man is discussed, as is his skill at pinching himself to keep from laughing during various takes.The Skiptracer’s Van Tour (3:33, 1080p) (EXCLUSIVE TO BLU-RAY) – This is an odd little piece, spotlighting Robert Patrick in character as the bounty hunter, as he gives the viewer a quick tour of his vehicle. Patrick is clearly ad-libbing his way through the discussion of the various items he finds in the doors and on the shelves.Previews – Several previews for similar Universal comedies are included in a separate menu.My Scenes – The usual Blu-ray bookmarking feature is available here, allowing the viewer to set their own bookmarks throughout the film.BD-Live – At the time of review, I was unable to activate any BD-Live functionality and I could not find a link to it in the main menu.DVD Copy – A second disc is included in the package, holding the standard DVD of the movie. It contains the movie presented in standard definition in an anamorphic 2.35:1 picture with Dolby Digital 5.1 sound in English (@448 kbps), Spanish and French, as well as the English DVS track. The gag reel and the longer featurette are also included. A “Previews” menu allows access to anamorphic trailers for Bridesmaids, The Change Up, paul, Couples Retreat, Hit & Run, Get Him to the Greek, Forgetting Sarah Marshall and Knocked Up.Digital Copy – Instructions are included in the packaging for obtaining a digital or Ultraviolet copy of the movie for your your laptop or portable device.Subtitles are available for the film and the special features, in English, Spanish and French. A full chapter menu is available for the film.

Identity Thief undoubtedly has its fans, but this reviewer isn’t one of them. The movie simply doesn’t work, in spite of the best efforts of some good supporting players, although not all of them seem to be playing in the same movie. There’s a germ of a good idea in here, but the movie quickly pushes it so far past the bounds of believability that the audience can no longer follow it. Melissa McCarthy’s fans will probably enjoy this movie, but past that, I’m struggling to think of who else would want to see it. Granted, it did fine at the box office – but we could say that about many movies that don’t measure up in terms of quality. The Blu-ray presentation is fine – solid picture and sound, and a few bonuses. This just isn’t a movie that rewards the time the viewer spends with it.