The producers of Fox’s Bones had no sooner dispensed with their ridiculously overdrawn, omnipotent serial killer Christopher Pelant (who had hung around for three seasons) when they introduced yet another one, The Ghost Killer, into the show’s mythology (by my count, ongoing serial killers now number six during its nine seasons on the air). To their credit, only four episodes revolved around this much more down-to-earth murderer leaving twenty episodes for the crack team at Washington D.C.’s Jeffersonian Institution to solve some of the most baffling mysteries imaginable. With the core cast in place for the ninth season and a couple of new faces dotting the landscape, things were just fine for this stalwart procedural on Fox’s primetime schedule. 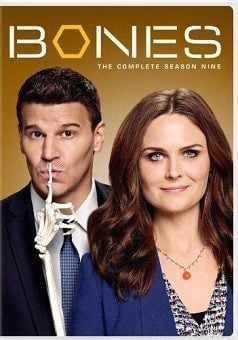 Though two episodes were primarily directed toward Pelant and his machinations into the Jeffersonian family (including the season premiere which was one of the most agonizingly painful of episodes for fans of the show), the show seemed to breathe a good deal easier once he was dispensed with in episode four. Thus, the show mostly stayed within the confines of its comfortable wheelhouse: solving grisly murders using the genius of forensic anthropologist and best-selling author Dr. Temperance Brennan (Emily Deschanel), her staff of selected interns (more on them later), her boss medical examiner Dr. Camille Saroyan (Tamara Taylor), particulates expert Dr. Jack Hodgins (T.J. Thyne), and artist, IT guru, facial reconstructionist, and best friend Angela Montenegro (Michaela Conlin), and the field expertise of crack FBI agent Seeley Booth (David Boreanaz) and FBI profiler Dr. Lance Sweets (John Francis Daley). Though the cases are closed-ended and can pretty much be watched in any order, there are revolving story arcs with the personal lives of the various characters. After getting past Pelant’s warning from the season eight finale, Booth and Brennan become engaged and eventually marry during the season. Later in the season, Booth begins to be closely scrutinized by his bosses seemingly to be reassigned to the Berlin field office of the FBI but actually for reasons quite apart from job promotion which are revealed in the fiery (and admittedly quite farfetched) season finale. While Angela and Jack are still living a middle class lifestyle due to Pelant’s having stolen their wealth, Jack also learns this season that he has a mentally challenged brother about whom he knew nothing. Camille has her identity stolen early in the season and through Angela’s expert computer detective work eventually learns the identity of the thief.

The show continues with its round-robin carousel of interns, all with unmistakable (and sometimes endearing, sometimes irritating) quirks and all of whom are given more character development this season. Repeating as the most appealing of the scientists who rotate throughout season nine is the all-American, down-to-earth Wendell Bray (Michael Grant Terry) who is horrifyingly diagnosed with a rare form of cancer and must undergo radiation and chemotherapy treatments. He remains, however, a breath of fresh air for the show with his every appearance. Also part of the group are the sweet-natured Islamic Arastoo Vaziri (Pej Vahdat) whose love affair with boss Camille Saroyan takes some traumatic detours this season due not only to her identity theft but also when she finally meets his parents and Joel David Moore’s comically nihilistic Colin Fisher who helps Jack come to terms with his handicapped brother. The least entertaining continue to be Eugene Byrd as Dr. Clark Edison (who this season becomes a published author but does begin mixing with the group more amenably) and Carla Gallo as the eternally chattering and highly egotistical Daisy Wick. Thankfully the writers have not reintroduced her involvement with Dr. Sweets, but they err by introducing a new intern, Jessica Warren (Laura Spencer), who is just as off-putting as Daisy and who tiresomely sets her cap for Sweets just as fast as Daisy did. Finn Abernathy (Luke Kleintank), previously involved in a romantic relationship with Dr. Saroyan’s daughter which is now ending, continues to bring down-home flavor to the forensics platform. Dr. Oliver Wells (Brian Klugman) whose genius I.Q. has made him an anathema to others in the lab makes a couple of fun appearances this season, his ego the antithesis of the other new intern Dr. Rodolfo Fuentes (Ignacio Serricchio) who thinks his looks and Cuban charm allow him to come on to every lady in the lab.

Though most of the mysteries are fairly plotted and offer a reasonable number of suspects which allow the audience to play along, there are no unusual episodes this season that are slightly out of the ordinary for a procedural. Bodies are found in unusual places (serving as the nutrition for kudzu, floating in a septic tank, exploded onto the walls of a mobile home, used as building blocks in a beaver dam, lying at the bottom of a wishing well, chopped into commercially sold beef stew, sliced apart in an industrial fan). Otherwise, the season allows for the return of one of Booth and Bones’ most playful alter egos Tony and Roxie to go undercover at a couples’ retreat to solve a case, and Dr. Sweets takes a more direct role in investigating the cases, especially near the end of the season when Booth is overloaded with paperwork to prepare for his exanimation before a Senate committee before his promotion is assured.

Here are the twenty-four episodes spread out over six DVDs in the season nine package:

The episodes are presented in their widescreen television aspect ratio of 1.78:1 and are anamorphically enhanced for widescreen televisions. Even in standard definition this season (several previous seasons were issued on Blu-ray), the show has a warm look to much of the cinematography, and the transfers capture it beautifully in sharp, colorful detail with very natural flesh tones. Occasionally, focus seems a little soft, but black levels are very nicely realized, and shadow detail is better than one might expect. There are some minor moiré patterns that can be glimpsed, but they’re never intrusive. Each episode has been divided into 12 chapters.

The Dolby Digital 5.1 sound mix uses music as the primary inhabitant of the front and rear surround channels, and yet it’s placed so masterfully that it seems to almost hover over the proceedings constantly and makes for a very ingratiating experience. There are occasional ambient sounds of voices in the lab or at a restaurant and some whooshing sound effects with vehicles as they speed to crime scenes along with some explosions which offer some work for the subwoofer apart from the music. The season finale does involve a firefight with multiple automatic weapons, and the sound design for this episode is exemplary.

Audio Commentary: “The Woman in White” features writer Karine Rosenthal and producers Hart Hanson and Stephen Nathan doing the honors. There’s perhaps too much overeager chuckling and teasing with the commentary on the show’s wedding episode, but it’s clear the three adore their cast and crew and take every opportunity to praise them.

Walking Down the Aisle Bones Style (9:09): the cast regulars along with creator Hart Hanson and producer Stephen Nathan all offer thoughts about what it took to get the characters to this very special day on the show and how emotional it was for them to go through the episode in character.

Deleted Scenes: five scenes are spread over three of the set’s six discs.

Bones at Comic-Con 2013 (29:45): host Will Keck questions panelists Hart Hanson, director Ian Toynton, and stars Emily Deschanel and David Boreanaz about the show, and Hanson drops some surprises about the upcoming season nine (the wedding, the return of Roxie and Tony, news about Pelant). Questions from the audience are also entertained.

Promo Trailers: How I Met Your Mother, White Collar, Let’s Be Cops.

While it’s very disappointing that Fox reverted to a DVD-only policy for Bones after offering it on Blu-ray for the last several years, the DVDs do look genuinely good in standard definition using a good upconverting player. The show had a generally good season apart from the ridiculously manipulative season finale setting up the usual cliffhanger for our heroes. Still, recommended.

I do like this show, I watched it from the beginning. I suppose it ran out of stream a season or two ago, but I'm glad they carried on, as I still really enjoy it. I'm sure the DVD looks great, but it's a drag there's no Blu-ray. Is it sales? If so, why not do something like a limited 2000 copy run for the Blu-ray fans.
You must log in or register to reply here.