This is one of my all-time favorite movies ever since I caught it on TV when I was younger. I would always watch it whenever it was on TV since it was never released on video or laserdisc.
I caught a letterbox showing on AMC the other day...wow! This is a great cinemascope production and would look excellent on DVD.
For those unfamiliar with the movie, it's a wonderful little black comedy with an excellent cast: Shirley Maclaine, Paul Newman, Dean Martin, Robert Mitchum, and Gene Kelly. Maclaine stars as a young woman who craves the dimple life, but every time she marries her husband becomes wildly successful and dies a strange death due to his work. With each passing marriage she becomes richer and less happy. Each of her marriages is depicted as a different type of Hollywood film parody (French, musical, etc.) and the sets, costumes and bright colors of cinematography are a sight to behold.
I think it's time this movie was released on home video and DVD would be an excellent way to showcase it.
I am sure there are other cult fans of this movie who have seen it on TV viewings and that cast alone might spur sales from others who have never seen it.
Anyone else care to second this nomination?

Wow, I'm surprised someone else knows this film besides me (I'm such a film fanatic that I can't begin to count how many times people have looked at me blankly when I mention an obscure film).
I'd buy this on DVD, bare bones would be fine, thank you.

Any other fans of this lost film?
Fox should license this to Anchor Bay or someone. I could see them resurrecting this as a lost cult classic, since it was never released on VHS. And that cast!
In re-watching it recently I noticed that Gene Kelly's character starred in a film called Flaming Lips. I wonder if that's where the band got it's name? 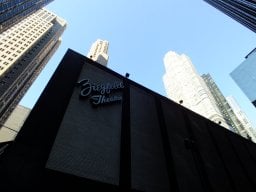 I agree this would make a great DVD. I can remember seeing it in the '60's on the bottom half of a double bill with the Jerry Lewis film WAY, WAY OUT (also from Fox). WHAT A WAY TO GO was miles ahead of the main feature in every way.
--Bill
You must log in or register to reply here.
Share:
Facebook Twitter Reddit Pinterest Tumblr WhatsApp Email Link