Roger Ebert considered Fat City to be one of director John Huston's finest films. That is saying a lot, considering that Huston directed such classics as The Treasure of the Sierra Madre, The Maltese Falcon, The African Queen, and The Asphalt Jungle, just to name a few. In Fat City he takes on the world of boxing - specifically, its underbelly world where boxing takes place in venues which have nothing in common with Caesar's Palace other than the size of the ring. Twilight Time has brought Fat City to Blu-ray with superb picture and sound courtesy of Sony. 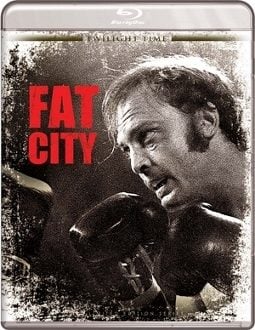 Before you can get rollin', your life makes a beeline for the drain. - Billy Tully

Fat City opens with an evocative montage of shots by famed cinematographer Conrad Hall of the decaying city of Stockton, California, circa 1970, accompanied by an instrumental version of Kris Kristofferson's mournful song "Help Me Make it Through the Night." Under the opening credits Billy Tully (Stacy Keach), a boxer who has seen better times, wakes up alone in a fleabag hotel which is, at least for the present, his home. He has not had a fight in 18 months, but this day, with nothing better to do, he decides to visit the YMCA and work out. There he meets Ernie Munger (Jeff Bridges), an 18-year-old who "just came down here to the Y to fool around a little." Tully was born only ten years or so before Ernie, but he seems to be much older. He invites Ernie to spar with him, and he is impressed with the young man's athleticism. Tully tells him that he should get serious about boxing and suggests that he go over to the Lido Gym and see his manager, Ruben Luna (Nicholas Colasanto).

Actually, Luna was Tully's manager. Tully doesn't go to the Lido Gym anymore because he owes Luna $20 and he is unemployed. While sparring with Ernie he pulls a muscle, so he heads over to a rundown bar for some drinks. There he meets Oma (Susan Tyrrell), a saucy, boozing, outspoken young woman who has experienced more than her share of hard knocks. She is a white woman living with a black man named Earl (Curtis Cokes, a non-actor who was once a world welterweight boxing champion). The interracial relationship is portrayed matter-of-factly. Indeed, race is an issue in the film only when Ernie shows up at Luna's gym. The manager is impressed with Ernie's natural skill, but he also realizes that a successful white boxer will bring in more white customers.

Stockton is located in the northern part of the fertile San Joaquin Valley. When other work is scarce, men line up early in the morning to get jobs as day laborers harvesting crops. When Tully loses his job as a fry cook, he becomes a day laborer. Ernie, meanwhile, begins to have some success boxing, but he also is involved with a girl named Faye (Candy Clark). She becomes pregnant and Ernie, who is both confident and ambivalent about boxing (Tully derides Ernie's "softness in the center"), begins to lose focus and one day he finds himself married and picking fruit with Tully. On one occasion the workers in the field talk about women while they toil at clearing weeds. "All a man needs," remarks one, "is a woman with a good job."

After Earl is arrested and incarcerated Tully moves in with Oma, but she is not interested in having any kind of job, good or otherwise. Tully decides to get into shape and try to make a comeback.

Fat City is based upon a novel of the same name by Leonard Gardner, who also wrote the screenplay. The dialogue is sharp, sometimes witty, and always rings true. John Huston's filmography is full of desperate characters who are trying to make the big time but whose personal shortcomings get in the way (think The Treasure of the Sierra Madre), and Fat City is no exception. Stacy Keach is wonderful as Tully, a man who once seemed capable of making it to the top but whose time has passed (when he is introduced at the beginning of his comeback bout, the ring announcer calls Tully "the pride of Stockton"). Jeff Bridges is not required to show a lot of range as Ernie, but he looks the part of a young fighter and his final scene with Tully is quite powerful and moving. Susan Tyrell, a wonderful actor who made a career of playing sharp-tongued dysfunctional characters, deservedly received an Academy Award nomination for her portrayal of Oma. Candy Clark does a nice job in her feature film debut, one year before her breakout performance in American Graffiti. The supporting cast is consistently excellent.

Fat City is a sharp-eyed, unflinching look at the seamy side of boxing. One boxer is medically cleared to fight even though he has blood in his urine. Tully is convinced that when he once fought south of the border, his opponent had razor blades embedded in his gloves. Some viewers might be disappointed in how the story ends, but this is no Rocky with fighters somehow finding victory in defeat. As Roger Ebert aptly put it, "If Huston and Gardner had forced the story into a conventional narrative of suspense, climax and resolution, it would have seemed obscene. There just isn't going to be any suspense, climax, or resolution in the lives of these people: Just a few moments of second-hand hope that don't even seem worth getting very worked up about at the time."

Fat City comes to Blu-ray in 1080p via the AVC codec. The image is properly framed at 1.85:1. As befits a Sony film, the transfer is flawless. Conrad Hall's outstanding and atmospheric cinematography perfectly captures the mood of the film.

Our resident expert, Robert A. Harris, on weighed in on this Blu-ray release and readers are encouraged to take a look at what he has to say:

There are two audio choices, both in English, one DTS-HD MA 5.1 and the other DTS-HD MA 2.0. Both sound excellent to my ears, but some viewers may prefer one over the other. The music seems to be more vivid in the 5.1 soundtrack. I believe that the film was originally shown in mono in theaters, but I do not have any authoritative information about that.

The extras on this Blu-ray disc include an illuminating commentary track by film historians Lem Dobbs and Nick Redman.

There is an isolated score track of the film's music, which was supervised by Marvin Hamlisch.

The only other extra on the disc is the film's original theatrical trailer, which is in very good shape.

Included with the Blu-ray disc is an illustrated booklet with a typically insightful essay by Julie Kirgo. She writes that Susan Tyrell is "perhaps the most convincing drunk" ever to be seen in a film.

Fat City is a realistic but downbeat look at a level of professional boxing which takes place far from the glitter of Las Vegas or Madison Square Garden. It is not for every taste, but those who appreciate John Huston and a cast of outstanding actors will want to go to the Screen Archives website or the Twilight Time website and make sure that there are still copies of this limited edition Blu-ray available.

Nice review, Richard. This is certainly a knock-out job by Twilight Time and to me one of their finest releases. Everything about this film is of the highest caliber...the direction, acting, photography, writing and I think the ending of the film is actually perfect and the use of silence expresses more than any dialogue could have. The film beautifully captures a time, place, and these characters and is actually fairly funny much of the time. It's certainly a very Bukowski world we get to visit and spend time in and Huston seems quite at home leading us through it. Twilight Time gets top grades from me for getting this one out on blu!


Huston was in fact a boxer at one time, so it certainly was a world he was familiar with.