All the King's Men Blu-ray Review

All the King's Men, winner of the Best Picture Academy Award in 1950, remains one of the finest films about politics ever made. Its pedigree is outstanding. The film is based upon Robert Penn Warren's Pulitzer Prize-winning novel of the same name, and it is impeccably directed by Robert Rossen (The Hustler), who also wrote the screenplay. Add to the mix Academy Award-winning performances by Broderick Crawford (Best Actor) and Mercedes McCambridge (Best Supporting Actress), and you have an unforgettable film which has been given a first-class Blu-ray transfer from Sony via Twilight Time. 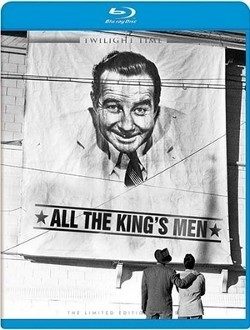 Power tends to corrupt and absolute power corrupts absolutely. - Lord Acton, 1887Willie Stark (Broderick Crawford) is a dirt farmer in an unnamed southern state who has had his fill of politicians who are unresponsive to the needs of the common people. He decides to campaign against the local political machine by running for county treasurer, and his efforts come to the attention of a newspaper editor in the state capital. Jack Burden (John Ireland), a reporter for the paper, is assigned to travel to Kanoma County to find out what the fuss is about. He discovers Stark giving an impassioned speech about corruption, a speech which is quickly brought to a halt when the local police intervene and disperse the crowd. The police also confiscate Burden's camera. Burden is impressed by Stark, who seems to be an honest man and who refuses to be cowed by his opponents, but it is clear that the farmer has little chance of winning.Burden is a complex character who also narrates throughout the film, and most of the action is seen through his eyes. Burden is in love with Anne Stanton (Joanne Dru, who in real life married John Ireland in 1949), the niece of a prominent judge, but there is a mismatch in their economic conditions. Although Burden comes from a wealthy family, (his childhood home is called Burden's Landing), he despise his stepfather and he refuses to take financial help from his mother. Consequently he is struggling to find his place in the world.Stark of course loses the election, but the setback only serves to drive him to improve his lot in life. He puts himself through law school and sets up his own legal practice. He makes a name for himself when he attacks a school construction project which is rife with nepotism and shoddy building materials. When a tragic accident occurs at the school, Stark becomes a local celebrity because of his opposition to the project. The school scandal threatens the prospects of the machine's candidate for governor, whose supporters then come up with the idea of enlisting a third candidate who, they hope, will split "the hick vote" and allow their man to win. They drive out to Kanoma City to recruit Stark for the job, leading him to believe that he is their real candidate. Sadie Burke (Mercedes McCambridge), a smart and blunt-speaking woman, is assigned to be Stark's handler.Burden's boss takes notice and tells the reporter to cover Stark's campaign. It quickly becomes apparent that the "handlers" are there to make sure that Stark has no chance of winning. His gives bland, boring speeches about tax policy which fail to make much of an impact upon the voters. The campaign is going nowhere until it dawns upon Stark that his handlers have stripped him of his natural passion and charisma. His campaign catches fire when he begins to disregard the handlers and once again becomes the crusading politician who successfully aroused the people of Kanoma County over the schoolhouse scandal. The transformation comes too late to win the election, but Stark learns a valuable lesson."How do you feel, Willie?" asks a disappointed Burden after the results are announced."I feel fine, fine," responds Stark. "You see, Jack, I learned something.""Yeah?" replies Burden. "What?"Stark flashes a crafty smile and says "I learned how to win."Stark eventually gains the power he seeks, on a platform of "soaking the fat guys," and he brings Burden along for the ride. The question is, what will he do with the power? The state needs paved roads, hospitals, better schools, etc., but at what cost? As Jack Burden notes, "Willie was right - he'd learned how to win, and he spent a lot of money doing it - an awful lot of money. I was beginning to wonder where he got it from."The performances are uniformly excellent. John Ireland (one wag has written that he always looks like he has an upset stomach) was nominated for the Best Supporting Actor Academy Award, and the supporting cast is populated by such familiar character actors as Will Wright and Walter Burke. John Derek also appears in one of his earliest roles as Stark's adopted son. Broderick Crawford is outstanding in the best role of his career, but he was nobody's idea of a leading man and he was never able to fully capitalize upon his award. Mercedes McCambridge is equally impressive as Sadie Burke. In addition to her Academy Award, McCambridge was selected the Most Promising Female Newcomer by the Golden Globes. Writer-Director Rossen received Academy Award nominations for both his screenplay and his direction. Rossen reportedly shot more than four hours of footage, and Robert Parrish and Al Clark were nominated for the Academy Award for Best Film Editing after paring the film down to its final running time of 109 minutes.The story of Willie Stark was inspired by the real-life Huey Long, the populist "Kingfish" who was Governor of Louisiana for four years and then was elected to the U.S. Senate. Long's motto was "Every Man a King" and his signature program was called "Share the Wealth." Anyone interested in learning more about Long would do well to pick up "Huey Long," the Pulitzer Prize-winning biography by T. Harry Williams. After watching All the King's Men you may be inspired to read Warren's novel, which was praised by Sinclair Lewis as "massive, impressive, yet so full of light subtleties and surprising drama that it is never ponderous. This story of a Southern Governor who is a scoundrel and a saint, a booze-hoisting vulgarian, and a wise and incorruptible leader of the people, a very funny fellow and somehow wistful and lost, and of the seedy men and lively women who follow him, is one of our few national galleries of character." The same can be said of the film.

The 1.33:1 1080p black & white high-definition picture is simply gorgeous. It retains an appropriate level of film grain and shows no hint of excessive digital manipulation. The image is spotless, without even a hint of age-related damage or dirt. The picture is very sharp and highly detailed, exhibiting solid blacks, excellent contrast, and very good shadow detail. The overall effect is a superb, very film-like presentation. Credit must go to cinematographer Burnett Guffey for the fine location filming which was done largely in small towns in California's San Joaquin Valley.

The 1.0 DTS-HD MA soundtrack faithfully reproduces the film's original audio. The mono sound naturally has limitations, but it is free of distortion and every word of dialogue is clear and intelligible. English SDH subtitles are available for viewers who need them. Louis Gruenberg's musical score can be heard on an isolated score track.

Apart from the isolated score track, the only extra is a re-release trailer, which is in very good shape. It actually appears to be the original theatrical trailer with a few seconds which tout the film’s three Academy Awards tacked onto the beginning.Of course, also included is an eight-page booklet which is illustrated with several stills from the film and contains a very informative essay by Julie Kirgo. Viewers who have seen the recent Blu-ray release of The Front will be interested to learn about Robert Rossen’s anguished dealings with the House Un-American Activities Committee during the Fifties.

All the King's Men is an outstanding examination of corrupt politicians, and its message is as relevant today - and perhaps even more so - as it was in 1949. It is unlikely that it will ever look and sound better than this wonderful Blu-ray release. As is always the case with Twilight Time Blu-rays, it is limited to a pressing of 3,000 units. Readers who are interested in purchasing it should go to the Screen Archives website and verify that copies are still available.

Richard,
Agree with the 5/5 Production Rating. One of the very few AA winners truly deserving of the award. As topical today as it was then.
A great movie and, by the way, a great novel, a Pulitzer Prize winner. It was republished a few years ago in an unadulterated version that I think was an improvement on the original.
This spawned an unnecessary and inferior remake of the 1949 classic.
This 1949 version is a must see!

I've only seen this film once, a very long time ago in a re-run theater. I thought it was superb. I'm delighted it has been released on a high quality BRD. I will definitely buy this.

You refer to "Rossen's novel" but don't you mean Warren?

Johnny Angell said:
You refer to "Rossen's novel" but don't you mean Warren?
Click to expand...

Yes, indeed. Thanks for catching that. I have Warren's book right in front of me!
You must log in or register to reply here.