What would one of Twentieth Century Fox’s flimsy backstage Betty Grable musicals be like with a completely African-American cast? We get the answer with Andrew L. Stone’s Stormy Weather. As with Grable’s vehicles, the movie with its mega-thin plot is merely an excuse to string together a series of musical numbers with the leading talent of the era, and what musical numbers they are! With Lena Horne leading the way (and doing more versatile performing here than she was ever allowed during most of her MGM years), Stormy Weather holds up well today as superlative entertainment. 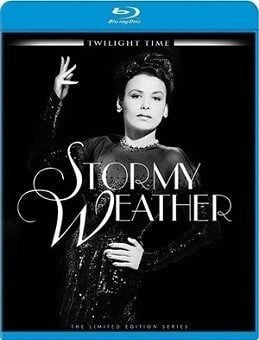 After World War I, returning soldier Bill Williamson (Bill Robinson) plans on getting back into the entertainment business, and he meets the beautiful Selina Rogers (Lena Horne) on the night of his return and is smitten. She’s getting ready to go into a show produced by and starring Chick Wallace (Emmett 'Babe' Wallace) and while enjoying his company, doesn’t make a connection until they meet again some time later in New Orleans when Bill is working for Fats Waller. Selina gets Chick to offer Bill a role in his new show which he does to placate her, but it’s an unfeatured ensemble role. When Bill takes matters into his own hands and steals Chick’s thunder during one of his ballads, he’s fired but rescued by Selina and later whisked off to make films in Hollywood where he offers to build a home for Selina and him if only she’ll leave the business and be his wife. She’s has dreams, too, however, and they part when she’s offered lucrative jobs in Europe.

The Frederick Jackson-Ted Koehler screenplay is the same kind of fluff plot that Betty Grable or Alice Faye would have typically been plopped into: on again-off again romantic entanglements and love triangles surrounded by more than a dozen musical numbers. Though some of the amazing talent on display remained headliners for many decades and are thus easy to recognize today (Cab Calloway, Fats Waller, the Nicholas Brothers), others like Ada Brown who does a scrumptious blues version of “That Ain’t Right” and Mae E. Johnson who delights with “I Lost My Sugar in Salt Lake City” aren’t nearly as well known and certainly deserve to be. The focus, of course, is on the two main stars: Lena Horne and Bill “Bojangles” Robinson. Horne burns up the screen with a number of solo moments: the legendary title song, of course, but also “There’s No Two Ways About Love” (which bookends the movie), and “Diga, Diga, Doo” with Horne exquisitely outfitted for a jungle cat number while sharing “The Cakewalk” and “I Can’t Give You Anything but Love” with Bill Robinson.

Newcomers to the movie will be surprised to see Lena Horne doing a fair amount of dancing in a couple of production numbers (she almost always was a stationary singer in her MGM movies and rarely had any dance steps to perform), and with her gorgeous face and figure, she for the first time proves herself to be a true triple threat artist to rank right alongside Faye and Grable in the talent department (more’s the pity that Cabin the Sky was the only other film musical which gave her a real chance at virtuoso performing, and she’s decidedly playing second fiddle to Ethel Waters in that). As for Robinson, he gets at least three solo tap and soft shoe routines where his famous stairstep tapping and easygoing movements endear him instantly to audiences (and his scene-stealing sequence during Wallace’s “Tom Tom” routine might have been even more impressive with more fluid camerawork). Cab Calloway in all of his zoot suited glory makes his own solid impressions with “Geechy Joe” and “Jumpin’ Jive,” the latter also featuring the astounding acrobatic tapping and leaping by the Nicholas Brothers. Sadly, Dooley Wilson, the actor who memorialized “As Time Goes By” in Casablanca, doesn‘t get to sing a single note in the film while playing Bill’s best friend Gabe Tucker.

The film’s 1.37:1 theatrical aspect ratio is presented intact here in a 1080p transfer using the AVC codec. Sharpness is superb throughout, and contrast has been magnificently applied to keep images consistent (except in moments where smoke or fog are intentional). The grayscale is quite impressive with rich black levels and whites of stunning purity. The movie has been divided into 24 chapters.

The DTS-HD Master Audio 1.0 sound mix offers mostly robust fidelity in presenting these jazz and blues greats singing and dancing their hearts out from the early-to-mid period of the twentieth century. Dialogue is always easily discernible, and the background music and sound effects blend nicely to present a fine mono sound experience.

Audio Commentary: Dr. Todd Boyd offers a particularly unsatisfying off-the-cuff commentary on the film stressing more sociological criticisms of the African-American cinema experience rather than providing viewers with much needed information on the production of the movie and detailed information on the personnel involved, particularly those artists who have faded into history and who Dr. Boyd fails himself to identify. Obviously speaking extemporaneously (judging by the irritating number of “uh’s” that punctuate his comments), Dr. Boyd’s agenda in decrying the treatment of the race in Hollywood instead of celebrating this rare, great opportunity at an A-film production budget to present these master performers is fairly off-putting.

Six-Page Booklet: offers a rich selection of black and white stills, original poster art on the back cover, and film historian Julie Kirgo’s enthusiastic overview of the film.

Stormy Weather is a must for film musical aficionados. It features singular performance moments from some of the greatest talents of the twentieth century: Lena Horne, Bill Robinson, Fats Waller, Cab Calloway, and the Nicholas Brothers, among many others in a sensational video and audio transfer that offers innumerable pleasures. There are only 3,000 copies of this Blu-ray available. Those interested should go to www.screenarchives.com to see if product is still in stock. Information about the movie can also be found via Facebook at www.facebook.com/twilighttimemovies.

"Despite the racial hurdles facing black performers, [the Nicholas Brothers] went on to Broadway, then Hollywood. Astaire once told the brothers that the acrobatic elegance and synchronicity of the Jumpin' Jive dance sequence in Stormy Weather (1943) made it the greatest movie musical number he had ever seen. In the number, the brothers tap across music stands in an orchestra with the fearless exuberance of children stone-hopping across a pond. In the finale, they leap-frog seamlessly down a sweeping staircase." 2

Comparison of Blu-ray to DVD. Big improvement in PQ and more picture info on all four sides.

RolandL said:
Comparison of Blu-ray to DVD. Big improvement in PQ and more picture info on all four sides.
Click to expand...

A superb Blu-ray disc, and it came out of the blue!

Wow, this thing has been out for a long time and now there's comparisons???

Between watching this around a dozen times and listening to the latest soundtrack on long trips, there is no comparison on how great the Blu-ray is and how perfect the music is.

Yes, anyone who doesn't have the Kritzerland release of this is missing out on something that's incredible. I has spoken.

Agreed Bruce. The Kritzerland Stormy Weather soundtrack is as wonderful as the TT blu-ray. The Sun Valley Serenade/Orchestra Wives and Centennial Summer soundtracks are excellent as well. I'll put my vote in for a The Gang's All Here soundtrack if the original tracks are extant.
Last edited: Nov 2, 2016

I remember a long time ago, when the DVD of Sun Valley Serenade came out, a reviewer was shocked to hear stereo sound when the songs played. They thought it was maybe reprocessed mono to stereo but, later found out that stereo tracks were found. Am I thinking of the right movie title?

It is time for a Blu-Ray of both SUN VALLEY SERENADE and ORCHESTRA WIVES. Hint, Hint?
Last edited: Nov 2, 2016

RolandL said:
I remember a long time ago, when the DVD of Sun Valley Serenade came out, a reviewer was shocked to hear stereo sound when the songs played. They thought it was maybe reprocessed mono to stereo but, later found out that stereo tracks were found. Am I thinking of the right movie title?
Click to expand...

At least one of the two Glenn Miller films had experimental stereo recordings made of the musical numbers. Off the top of my head, I'm not certain which film, so you may well be right.

It wasn't either of those two (or Stormy Weather). I've worked on all of those and they were recorded monophonically.

RolandL said:
I remember a long time ago, when the DVD of Sun Valley Serenade came out, a reviewer was shocked to hear stereo sound when the songs played. They thought it was maybe reprocessed mono to stereo but, later found out that stereo tracks were found. Am I thinking of the right movie title?
Click to expand...

Wasn't it the laserdisc of Sun Valley Serenade that had imitation stereo?

The Gang's All Here is coming shortly

JoelA said:
Wasn't it the laserdisc of Sun Valley Serenade that had imitation stereo?
Click to expand...

I don't know what to call the stereo sound. See some reviews below.

" The musical numbers were recorded in multi-directional mono, placing microphones around different parts of the orchestra. Those were all mixed down to mono at the time the film was released. The parts of those recordings were found and mixed into true stereo. They have also been included in home video releases."

"...filled with a TRUE STEREOPHONIC High Fidelity Sound Track so you get to hear the GREAT Glenn Miller Swing Band in Full TRUE Stereo. Optical Angle Sound Tracks were used to create the MASTER FILM of this movie and from that a TRUE Stereo Sound track is created that was also in vivid clean High Fidelity with a 30-15,000 Hz Fequency Response thanks to optical sound's great quality and ultra low noise and low distortion. This movie sound track sounds as good as if it was recorded on a CD yesterday. And listen to it in Dolby Surround by using your Home Theater's Dolby Pro-Logic IIx decoding setting and you will hear this SUPER Stereo Recording in 5.1 channel Dolby Surround. It weas recorded using the highest fidelity microphones ever made in the 1940s, the RCA "Skunk" ribbon velocity boom mics and the RCA 44-A and 44-B Ribbon Velocity Microphones that captured the full high fidelity range of 30-15,000 hz perfectly. All in all theis is a sonic spectacular fully equal to any modern day movie sound track and yet it was recorded in 1941 with the most advanced optical audio recording equipment available. You'll LOVE thi9s one on your home theater. It's one of two films that Glemm Miller did in Hollywood in the early 1940s with his famous Swing Band and all their popular top hit recordings are featured, sounding better than ever before. The other film also available in 1941 True Stereo High Fidelity is "Orchestra Wives" also available on VHS and LD in home video and another Miller Swing audio spectacular in TRUE Stereo HiFi with the rest of the famous Miller hits and an all star cast in both films."

haineshisway said:
The Gang's All Here is coming shortly
Click to expand...

Fabulous news! Thanks. Looking forward to this one!

haineshisway said:
The Gang's All Here is coming shortly
Click to expand...

Just ordered it Bruce. Looking forward...
You must log in or register to reply here.