Dallas Buyers Club brings its prescription to Blu-ray in a nearly extras-free edition that at least gives this movie a solid presentation of its picture and sound. Make no mistake, this is a tough movie, covering some of the events of what happened to Ron Woodroof in the 1980s after he was diagnosed with AIDS and given a short time to live. The movie is as scrappy as its main character – made for a low budget and spotlighting courageous performances by Matthew McConaughey and Jared Leto, both of whom lost a significant amount of weight to play their parts. The movie doesn’t flinch from portraying the sex, drugs and rock and roll of Woodruff’s life, which may be a bit much for many viewers. It’s not a perfect movie, but it’s an important one. For that reason, and despite the lack of special features on this disc, the release is Recommended for purchase or rental. 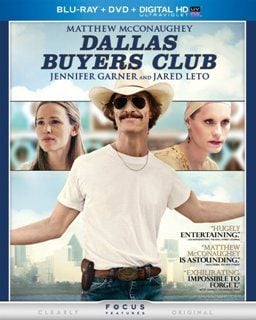 Dallas Buyers Club is easily one of the most significant films made in 2013, although you might not be able to tell that from the package. It’s a low-budget examination of what happened to hard-living Texas electrician Ron Woodroof (Matthew McConaughey) after he was diagnosed with AIDS and told he had 30 days to live. As one can imagine, he didn’t take this lying down. His efforts to find medication that could actually help treat people with AIDS became a news story back in the 90s, and inevitably led to this movie. It’s a significant achievement that Dallas Buyers Club was finally produced, more so than many viewers may realize. Initially planned in the 90s, and passed among multiple directors and actors, the movie eventually landed with Canadian director Jean-Marc Vallée and actor Matthew McConaughey. Along the way, the potential budget for the movie was reduced to a level where Vallée found himself scrambling to make the movie on a fast shooting schedule with very little money. Vallée has said that he was compelled to do without a lighting package and thus shot the movie with available light only. So this isn’t going to be the most beautifully photographed movie you’ll ever see. Nor is it the most expansive in terms of design or storytelling.SOME SPOILERS HERE: Where Dallas Buyers Club really shines is in the performances, particularly those of Matthew McConaughey as Woodroof and Jared Leto as an invented composite character, Rayon, a transgender woman who helps Woodroof supply AIDS patients with a supply of illegal, untested, but apparently helpful medications that keep many of them alive where conventional medication is failing. McConaughey pulls out all the stops, dropping a reported 50 pounds to play the emaciated Woodroof – and at times, the weight loss is quite difficult to watch. Leto similarly shows a significant weight loss, taking on the arguably more difficult role of Rayon and pulling it off with enough conviction to make an Academy Award almost certain in a month’s time. For that matter, McConaughey is equally likely to come out with an Oscar. Beyond these two, there are some great supporting performances, particularly from Michael O’Neill as a fairly nasty FDA man and Griffin Dunne as a doctor south of the border who supplies Woodroof and his illicit club. All of this is done without trying to sugar coat Woodroof’s life or the journey he found himself on after the diagnosis.As a Blu-ray release, Dallas Buyers Club serves as a good spotlight for the performances, which by themselves are a solid reason to spend the two hours with this movie. This isn’t a pleasant ride for much of the time, and there are scenes that may well be too much for the casual viewer, but the message of humanity and tolerance this movie is trying to send is more than worth the effort. It’s a downright shame that the Blu-ray doesn’t include more than a bare minimum of extras, but the movie itself is powerful without the added material. Without hesitation, I’m certifying this Blu-ray release as Recommended. Watch it before the Academy Awards to find out what the fuss is about.Dallas Buyers Club is being released on Blu-ray and standard definition this week. The standard definition DVD, which is included in the Blu-ray packaging, holds the identical content as the Blu-ray.

Dallas Buyer’s Club is presented in a 1080p AVC 2.40:1 transfer (@ an average 32 mbps) that presents the movie in the best possible manner. Given that the movie was shot in a very short time without a proper lighting package, the picture quality of the source materials is fairly murky at times. The transfer at least gives the viewer the best possible view of the movie – the many daylight scenes certainly look great. Any dim, dark or exterior night scenes obviously have source issues that the transfer cannot correct. That said, this Blu-ray is the best the movie has looked, and probably will ever look.

Dallas Buyers Club is presented in an English DTS-HD Master Audio 5.1 mix in English (@ an average 3.0 mbps, up to 4.1 mbps), which mostly lives in the front speakers. This is not an active mix, but it makes the dialogue as intelligible as possible and occasionally comes to life with a bit of atmospherics here and there, or a hint of the subwoofer. Keep in mind that this movie did not even have the benefit of ADR, and the strength of this mix will become a little clearer.

The Blu-Ray presentation of Dallas Buyers Club comes with about five minutes of deleted material and a four minute featurette. The Blu-ray packaging also includes the DVD of the movie.Deleted Scenes – (4:55, 1080p) (AVAILABLE ON DVD & BLU-RAY) – Just under five minutes of deleted material is included, here most of which consists of a single scene between Jennifer Garner, Matthew McConaughey and Jared Leto. There’s nothing really earth-shattering here, other than to show in more concrete detail one step in the evolution of Ron Woodroof’s character.A Look Inside Dallas Buyer’s Club – (3:56, 1080p) (AVAILABLE ON DVD & BLU-RAY) – This is a quick featurette that doesn’t really do more than scratch at the outer surface of the movie. Matthew McConaughey, looking a lot healthier, provides an introduction to the usual array of mutual compliments among the cast, intercut with clips from the movie.DVD Copy – A second disc is included in the package, holding the standard definition DVD of the theatrical cut, presented in standard definition in an anamorphic 2.40:1 picture with Dolby Digital 5.1 sound in English (448 kbps). The same bonus features are included, albeit in standard definition.Digital Copy – Instructions are included in the packaging for downloading a digital copy of the movie to your laptop or portable device.Subtitles are available for the film and the special features, in English and Spanish. A full chapter menu is available for the film.

Dallas Buyers Club is a tough, unapologetic movie, and one that is worth your time to see. It’s not for the timid, but the journey is rewarding – if only for the standout performances of Matthew McConaughey and Jared Leto. The high definition picture and sound give the best possible presentation to the low budget production, but the sound mix isn’t the reason the movie will be remembered. There are very few bonus features included on the disc, but it can be argued that the movie speaks for itself. Dallas Buyers Club is Recommended for purchase or rental.

I have my copy all set and ready to go for the home portion of my annual Oscar run. All three released Blu-ray Disc itles presently in contention for the major award categories are now at my dispersal to watch at my discretion in my home. I look forward to viewing this one very soon. Thanks for the review, Kevin.
You must log in or register to reply here.